Gophers travel to Illinois to compete in NCAA Midwest Regional

Both the men’s and women’s teams will compete in DeKalb, Ill., over the weekend with an NCAA berth on the line. 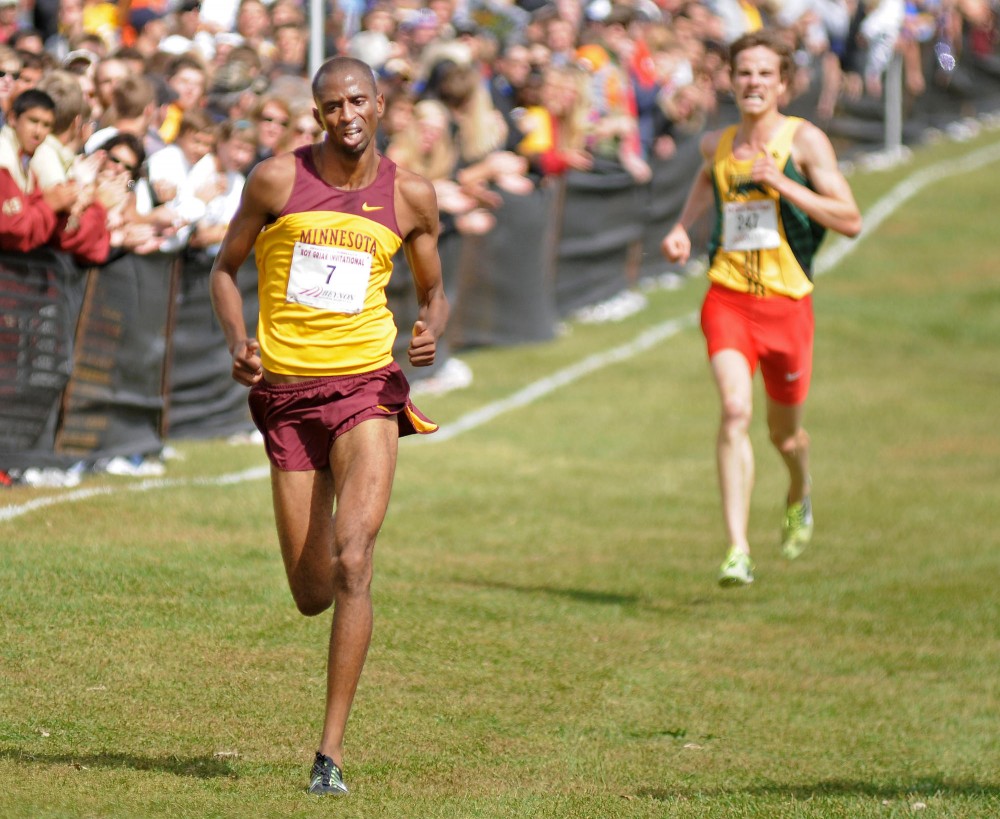 The Gophers menâÄôs cross country team will make its first-ever trip to DeKalb, Ill., this weekend to compete in the NCAA Midwest Regional.

No. 18 Minnesota placed third at the Big Ten championships two weekends ago behind 13-time defending champion and top-ranked Wisconsin and No. 7 Indiana.

The GophersâÄô level of competition will not change in this weekend at the regional meet.

âÄúWe have a couple of the toughest teams in the country there in Oklahoma State and Oklahoma,âÄù menâÄôs head coach Steve Plasencia said. âÄúIt will be some tough competition at the top, but regionals are always important competitions because they represent a gateway to the NCAA meet.âÄù

Oklahoma State is No. 2 in the country and Oklahoma is ranked fifth nationally.

The top two finishing teams from each regional meet automatically qualify for the NCAA championships on Nov. 21.

With the Gophers ranking behind both Oklahoma State and Oklahoma in the Midwest Region, it will take a near-perfect race for the Gophers to unseat either of those teams.

âÄúIf you get in the top two all the questions are done,âÄù Plasencia said. âÄúIf weâÄôre third I have some confidence that given our rÃ©sumÃ© throughout the year that we will get selected, but if we fall below third it starts to get cloudy.âÄù

Something that may help the Gophers in qualifying for the NCAA championships is the stretch from the standard 8-kilometer race to an extended 10-kilometer race this weekend.

âÄúI think with a guy like Pieter Gagnon, who runs the 10K on the track âÄî heâÄôs completely comfortable with that distance,âÄù Plasencia said. âÄúHassan Mead is a true blue distance runner, so the change is also good for him.âÄù

MeadâÄôs return from an injury-riddled last season âÄî in which he missed the regional meet âÄî should provide the Gophers with an added boost in their quest to qualify for the NCAA championships. But Plasencia said he will be looking for other runners on his team to come through, as well.

âÄúThis is the time of year when it gets exciting,âÄù Plasencia said. âÄúItâÄôs a good time for people to step up.âÄù

Following a disappointing fifth place finish at the Big Ten championships, the womenâÄôs cross country team will look to bounce back this weekend at the NCAA Midwest Regionals.

The Gophers have made it to the NCAA championships for six straight seasons and will look to make it seven years in a row in DeKalb, Ill., on Saturday.

Steph Price, who finished fifth at the Big Ten championships, headlines the scoring roster for the Gophers and will again look to lead the team this weekend.

Just like in the menâÄôs region, a top-two regional finish would guarantee a trip to the NCAA championships. Lower finishes would require an at-large bid selection.

In order to alleviate any added stress in the qualifying process, Minnesota will strive for at least a third-place finish at the regional meet, head coach Gary Wilson said.

âÄúI think if weâÄôre third we would go almost for sure because we have enough points against other people,âÄù Wilson said. âÄúObviously weâÄôre going to go in and run for a top-two spot, but Iowa State is the odds-on favorite âÄî theyâÄôre the best team in our region.âÄù

Wilson said he emphasized being further up in the pack midway through the race this weekend. His team has had a habit this year of being too far back to make up ground in the second half of races.

âÄúWe have to give ourselves a little bit better opportunity to move from 25th up to 15th âÄî you canâÄôt start at 40th or 50th and expect that youâÄôre going to end up in the top 15,âÄù Wilson said. âÄúIt just doesnâÄôt work that way.âÄù

Missa Varpness âÄî who entered the season as the teamâÄôs No. 2 runner âÄî will not compete on the scoring roster at the regional meet.

Varpness has struggled this season and finished 95th at the Big Ten championships.

She will still travel with the team and serve as an alternate over the weekend, according to Wilson.

Wilson predicted his team is capable of making the cut for the NCAA championships.

âÄúI think if they execute the way we want them to, I think theyâÄôll go to Nationals for the seventh year in a row,âÄù Wilson said. âÄúBut you have to execute.âÄù