The new complex will serve people with Asperger’s syndrome. 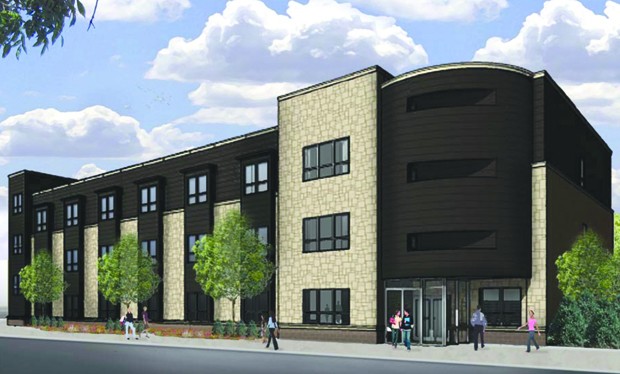 A select group of students may find it harder than most to adjust to the noises, scents and social scene of dorm life, but a planned housing development in Prospect Park will provide them with a more comfortable environment. A support organization for people with AspergerâÄôs syndrome has made plans to build Stepping Stone House, a housing complex that will provide transitional housing for people between ages 18 and 26 with AspergerâÄôs syndrome and other learning disabilities. AspergerâÄôs syndrome is a disorder that is on the low level of the autism spectrum. It can lead to significant deficits in social skills, limited or narrowed interests and sensory issues, said Rachel Gardner, a licensed psychologist at Fraser, a nonprofit organization that provides education, health care and housing to children and adults with special needs. The syndrome is estimated to affect two out of 10,000 American children. Stepping Stone House will give residents the opportunity to learn how to live on their own while still providing them with 24-hour support. âÄúThe whole goal of this facility is to allow them to be able to live as independently as possible,âÄù said Theresa Namie, executive director at ANSWER Aspergers Network Support. Namie said although people with AspergerâÄôs syndrome usually have normal IQ scores and are able to attend college, they have an especially difficult time living in the dorms. âÄúItâÄôs a huge struggle for them,âÄù Namie said, âÄúbut itâÄôs not that they canâÄôt do it.âÄù NamieâÄôs son, Ryan Namie, is a first-year student at St. Cloud State University who was diagnosed with AspergerâÄôs syndrome when he was 10 years old. Ryan Namie, who has been living in the dorms since the beginning of fall semester, said he had a hard time adjusting to life away from home but has pushed through obstacles to make it work. âÄúI know if I moved home I would just sit around,âÄù he said. Ryan Namie said he especially struggles with enhanced sensitivity to smells and sounds âÄî even those that may go unnoticed by most, such as the buzzing of lights. Despite these struggles, Ryan Namie said he now appreciates dorm life because it gives students the opportunity to socialize and make new friends. He added that a project like Stepping Stone House would fulfill this same function and provide an easier transition for people with AspergerâÄôs syndrome who want to move out on their own. Developer Dawn Chapman, from Firm Ground Architects and Engineers, said she came up with the idea for the project after discussing her own sonâÄôs learning disability with a psychologist, who said there is a huge housing shortage for people with autism spectrum disorders. Chapman said that although many of these people are extremely intelligent and capable of success, their parents may be scared to let them move out on their own. âÄúThey are typically a real vulnerable population,âÄù Chapman said. âÄúParents of these young people tend to have a hard time letting them go, because they may be taken advantage of.âÄù Chapman also said students who live in the dorms may become isolated, and they need a more supportive environment to succeed. The building will be managed by staff from The Cooperating Community Programs, an organization that specializes in residential home care for people with disabilities. Chapman said residents in this building will have individual needs and support levels, which CCP will be able to provide for them. Theresa Namie presented plans for the project to the Prospect Park East River Road Zoning Committee on Thursday. The committee said the neighborhood would be happy to host the project and its future residents. âÄúIt sounds like a marvelous program,âÄù said Dick Poppele, president of the Prospect Park East River Road Improvement Association. âÄúWe will definitely support it.âÄù The complex will be located on 27th Avenue across from the Glendale housing complex, near bus stops and the future Central Corridor light-rail line. Theresa Namie said easy access to public transportation is important for people with AspergerâÄôs sydrome, since many of them canâÄôt drive because of intense anxiety. Chapman said construction will begin as soon as funding is in place.