U research shows Somali immigrants are returning for different reasons. 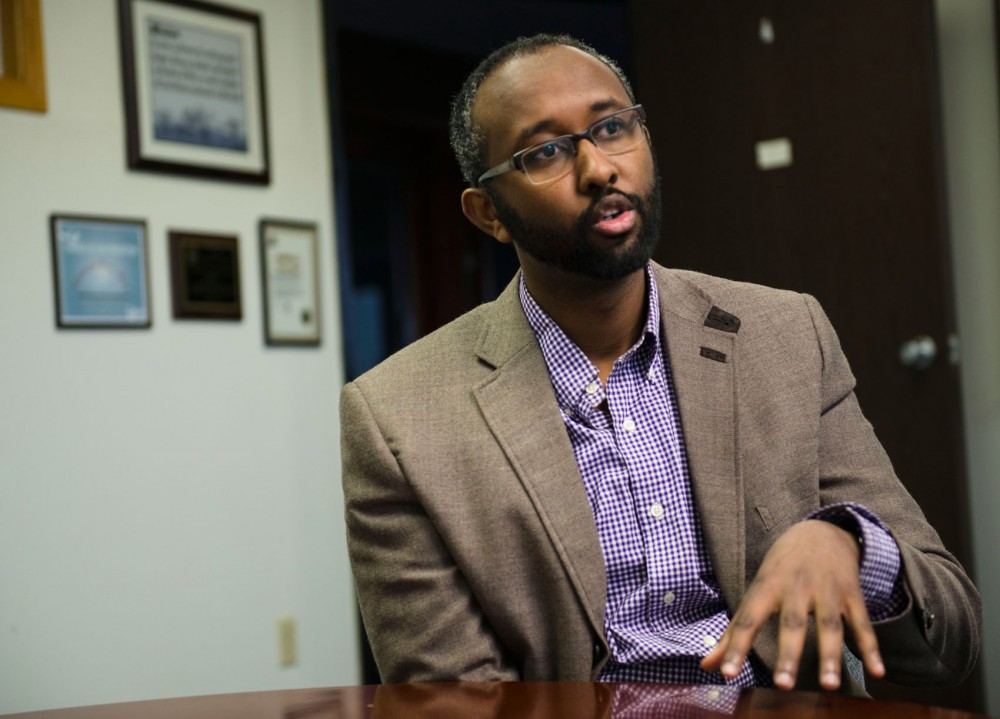 Jaylani Hussein, board member of American Relief Agency for the Horn of Africa, speaks about the history of Somalia on Saturday, April 26.

When the civil war in Somalia broke out more than 20 years ago, Jaylani Hussein and his family were among the first to move to the United States.

Hussein has lived in the U.S. since 1993. He speaks English without any hint of an accent, holds two bachelor’s degrees, goes deer hunting in the fall and works for the Minnesota Department of Agriculture.

In 2008, Hussein returned to his birthplace, the city of Hargeisa, for the first time.

Just like Hussein, more Minnesotan Somalis are going back. An ongoing University of Minnesota research project from the Humphrey School of Public Affairs is collecting stories from immigrant Somalis in the Twin Cities to find out why.

Though the number of people returning is “impossible to quantify,” signals such as airlines flying daily to the capital of Mogadishu or “chatter in the community about returning” can’t be ignored, said Ryan Allen, principal researcher and assistant community and economic development professor.

Humphrey research consultant Kadra Abdi said other research has looked at the financial side of people returning, but they wanted to focus on the social aspect.

Allen and his research team have so far completed about 60 oral interviews with Twin Cities residents who have returned to Somalia, most of whom were men in their late 20s or 60s.

The researchers presented their findings last month in Washington, D.C., to the National Security Council and the State Department, among other stakeholders. Since the study is ongoing, the findings are currently preliminary. But Allen said he hopes to finish the data collection by the end of May.

A report from the Office of the United Nations High Commissioner for Refugees estimates that more than 1 million Somali refugees are living around the world. Of those, about 10,000 have returned to Somalia.

But the research at the University has found that those returning are usually not doing so permanently.

“Some had no qualms about feeling at home in both Somalia and the Twin Cities,” Allen said. “They don’t want to move, but their culture is important to them and their families.”

Whether it was due to feelings some Somalis have toward the U.S. or because some Americans distrust Somalis, Allen said, he’s found returners feel safer if they have as little to do with the U.S. government as possible.

Allen said those returning might get a temporary job or internship in Somalia, or they come back because they’re concerned with security there.

“It’s hard to say there’s a peace there,” said Hussein Ahmed, executive director of the West Bank Community Coalition. “These people might go to Kenya or Uganda first to make contacts in a safer place.”

Or, as in Hussein’s case, the researchers found that returners worked on humanitarian projects. As a board member of American Relief Agency for the Horn of Africa, Hussein helped set up schools, distribute food and improve infrastructure in northern Somalia and along the Ethiopian border.

“Even regular people are going back,” Hussein said. “People who didn’t think they could make an impact found they could.”

The researchers have mostly collected information from people beyond their early 20s.

Mohamed Shire, president of the University’s Somali Student Association, said most young Somalis have no intention of going back to Somalia, though many will send money back to their families.

It’s mainly the older generations that want to return to Somalia, he said.

“There’s a huge difference in culture. The younger kids are American. It’s never occurred to them, going back,” Shire said.

But Hussein said he sees it differently.

“There’s the first wave of immigrants who’s lived the horror of Somalia,” Hussein said. “We, their children, were sheltered from it. They don’t see it as a place of hope. I look at Somalia as an opportunity.”

The Somali-Americans who return to Somalia mostly work in the government or for nongovernmental organizations, Allen said. Many start businesses there. Some have run for office, and some even intend to run for president.

“People who go back are highly engaged, both in the U.S. and Somalia,” Allen said. “They’re doing the same thing there. They care about Minnesota, but also about Somalia.”

Abdi said those who return are in tune with both countries, and that shapes their dual identities.

“A few years ago, some young men from Minneapolis returned to Somalia and joined [the terrorist group] al-Shabaab,” Abdi said. “That’s the narrative that’s stuck with most people. We want to provide a broader narrative and highlight the positive changes.”