Also, no decision has been made on Devoe Joseph's indefinite suspension. 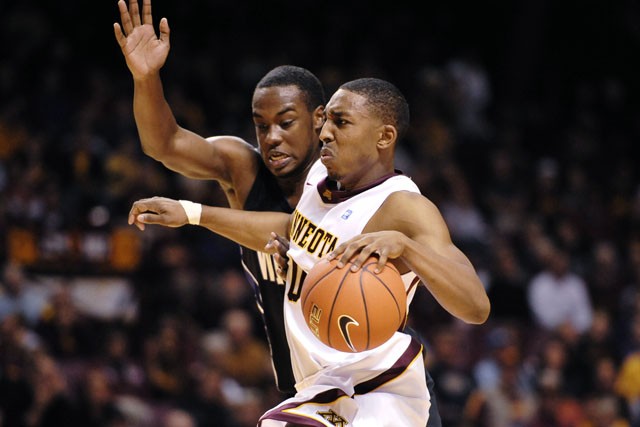 The No. 15 Minnesota menâÄôs basketball team will have to battle through some adversity in the coming weeks if it hopes to keep its record unblemished.

âÄúThey want to watch him and get him off his feet for a while,âÄù Smith said. âÄúIâÄôm not sure how long that will be.âÄù

The senior captain is the defensive backbone for the Gophers (6-0), averaging 2.8 steals per game. HeâÄôs also shown improvements offensively, averaging 9.2 points per game as well as 4.2 assists per game in 31.8 minutes per contest.

Also hit by the injury bug is sophomore wing Rodney Williams, who twisted his right ankle in WednesdayâÄôs win over North Dakota State. Smith said Williams has not been practicing and is “doubtful” for MondayâÄôs game against Virginia, part of the Big Ten/ACC Challenge.

Although Smith was non-committal, he said if he made the roster Saturday, freshmen Austin Hollins and Maverick Ahanmisi would start in place of Williams and Nolen. Both have played well in limited time this season, and Smith said their experience to this point should help make the increase in minutes a smooth transition.

Hollins started against Siena in place of Williams, who was being disciplined for undisclosed reasons, and played a season-high 23 minutes on Wednesday, much of which came after Williams’ injury.

âÄúWhen you have injuries and you have things happen, and you donâÄôt have your regular people available to you,âÄù Smith said, âÄúthen youâÄôve got to haveâÄ¦ given them an opportunity so theyâÄôre confident they can go in the game and get the job done.âÄù

No decision has been made on junior guard Devoe JosephâÄôs indefinite suspension, and Smith said he will decide whether or not he can rejoin the team on Monday, prior to the 6 p.m. start of the Virginia game. Even if Joseph returns for his first action of the season, Smith said he would not start.

âÄúIâÄôve just got to look at some academics things heâÄôs got to finalize, so hopefully heâÄôs got it done,âÄù Smith said of Joseph. âÄúI know heâÄôs been working hard on it, and I know heâÄôs anxious to get back out here, and weâÄôre anxious to have him back.

âÄúBut heâÄôs only going to be back if he takes care of all of his business.âÄù