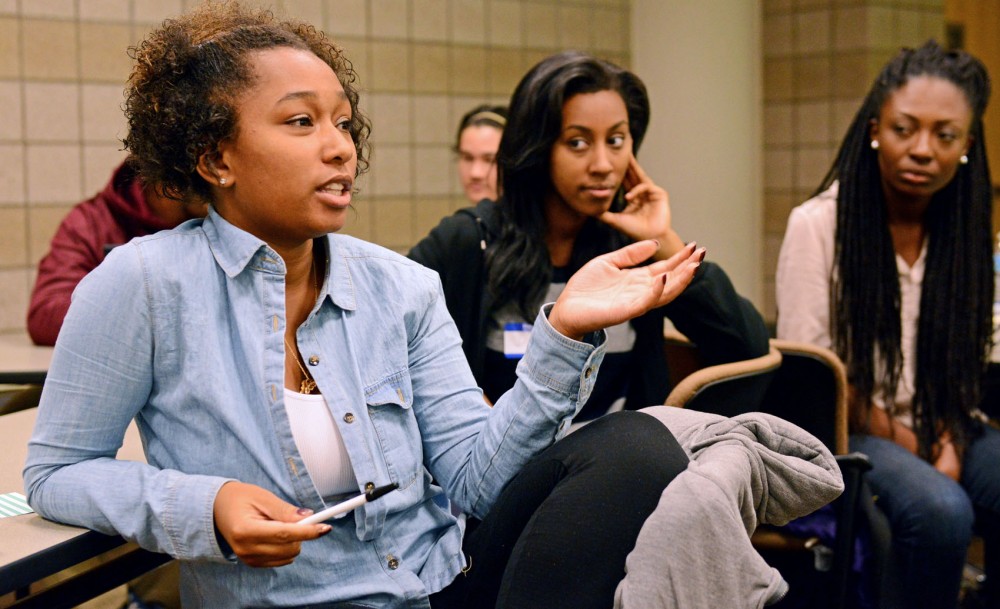 Food and agriculture junior Essence Bonner weighs in during Alpha Kappa Alpha's Race and Media event Thursday in the Molecular and Cellular Biology building. The event included large- and small-group discussions, as well as a Q&A with professors from both the University of Minnesota and St. Mary’s University.

St. Mary’s University professor Yvette Pye has been disappointed by media coverage of the 2012 presidential election.

“The extent that [the election] has become racialized is sad,” she said. “It shows that we haven’t come as far in this nation as we should have in terms of accepting each other as equals.”

Pye shared her views Thursday evening as part of a campus discussion hosted by the University of Minnesota chapter of Alpha Kappa Alpha Sorority. The historically black greek organization used Tuesday’s election as an opportunity to discuss the intersection of race, media and politics.

Along the campaign trail, Pye said media focus has fallen on President Barack Obama’s race rather than the issues.

Victoria Oyewole, a biology senior who attended the discussion, said she believes Obama is under more scrutiny because he is a black man.

“I think people are getting away with [criticizing Obama] more because of his race,” she said. “I’ve seen both [parties] use race in ways that are not beneficial or progressive.”

Members worked with faculty from the University and St. Mary’s University to facilitate small- and large-group discussions about how race plays into media coverage. About 50 students, faculty and community members attended the event.

After a group critique of media coverage leading up to the 2012 presidential election, attendees tackled other issues, including race’s role in social media, comedy and athletics.

“When we create [media] images, we have to be critical about them,” said Vanessa Abanu, outreach coordinator for the University’s Department of African American and African Studies, who also spoke at the event.

AKA was the first black sorority started in the U.S. in 1908. Its Mu Rho chapter is currently one of two historically black sororities on campus after returning to the University last December.

This was the sorority’s second event focusing on the relationship between race and the media. Vice President Mary Taylor said the group returned to the topic because it affects everyone, especially this election year.

Oyewole called Thursday’s event “eye-opening” but said she wished the event would’ve had a broader reach.

“I would like the discussion to be opened more into other races,” she said. “It’s never just a black-white thing.”