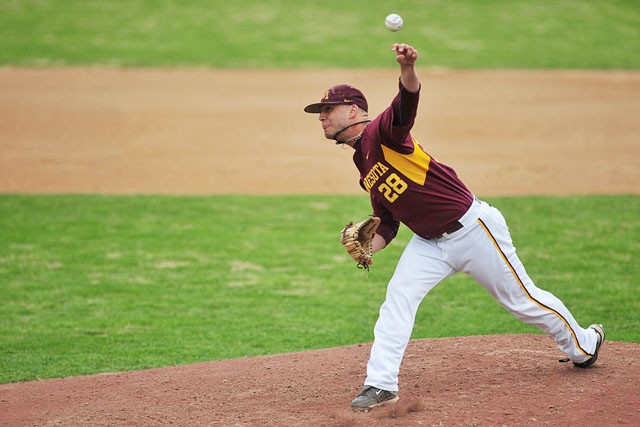 After a weekend sweep on the road in Indiana, the Gophers draw conference cellar-dwellers Iowa this weekend looking to go above .500 for the first time this season.

Minnesota (14-16, 6-6 Big Ten) has evened its record six times on the season and each time has dropped the next contest. The last time the team had an even record (9-9), it went a four-game losing streak.

In between the GophersâÄô Big Ten weekend series, however, were a cancelled home game and a 9-6 road loss against South Dakota State.

After TuesdayâÄôs home game was rained out, the team headed to Brookings, S.D. Wednesday to find some innings for its under-used relief corps.

MinnesotaâÄôs relievers (six in all) were roughed up by the JackrabbitsâÄô bats. SDSU sent 11 men to the plate in the third inning, scoring six runs on six hits off three different pitchers.

The Gophers answered with a rally of their own and batted around in the top of the fourth, chiseling three runs off the Jackrabbits lead. Justin Gominsky left the bases loaded when he grounded out to shortstop to end the inning and bring the charge to a halt.

Starter DJ Snelten was tagged with the loss and falls to 0-2 after giving up four hits and three earned runs in 2.1 innings.

He filled numerous counts and threw three balls to more than just the three batters he walked. Snelten was on a pitch count that he reached quickly because of his control issues and a big second inning, in which he allowed five straight batters to reach base with two outs.

Tim Ryan relieved Snelten with one out in what became the killer third inning.

Ryan got the first batter to fly out to center field, but with two outs and a runner on second, the inning unraveled. Ryan hit the next two batters before giving up a bases-clearing double and back-to-back RBI singles. Ryan was relieved by Alex Tukey, having recorded only one out in six batters faced.

Tukey gave up an RBI base hit before finally retiring the final batter in the frame. He ended up lasting 2.1 innings without allowing a run and he and Luke Rasmussen combined for the only extended successful stretch of Gophers pitching.

Rasmussen pitched two innings and gave up two hits but no runs. The 4.1 scoreless innings from he and Tukey allowed Minnesota to claw its way back into the game.

After scoring the gameâÄôs first run, the Gophers trailed by as much as 8-1. They came almost all the way back, but gave up a run in the bottom of the eighth and didnâÄôt score in the top of the ninth to seal the 9-6 loss.

Gophers second baseman Matt Puhl had a strange game. He was called for batter interference in his first at bat, then walked and scored in the fourth and later drove a solo home run to right field.

Puhl also drove a ball up the middle in the eighth and the shortstop booted it for an error. He scored his third run of the game to cut the Jackrabbits deficit to two runs, but a rally never materialized.

SDSU catcher Zach Briggs was 3-for-3 with two walks and five RBI and broke the game open with his three-RBI double in the third inning âÄî terrific production from the ninth hitter in the order.

The Jackrabbits (24-11) swept MinnesotaâÄôs next opponent, Iowa, in a two-game series earlier this season.

The Hawkeyes are 4-8 in the Big Ten and 15-23 overall and stand alone in last place in the conference.

The Gophers are tied with five other teams for fourth place in the conference.

AJ Pettersen said the team feels it has âÄúweathered the stormâÄù by surviving the early slate of cancelled games and strong Big Ten opponents Purdue and Michigan State.

One would think by now this team would refrain from tempting fate with a weather-related metaphor.