Minnesota walks away with two first-place finishes on day two of the Cardinal Invitation. 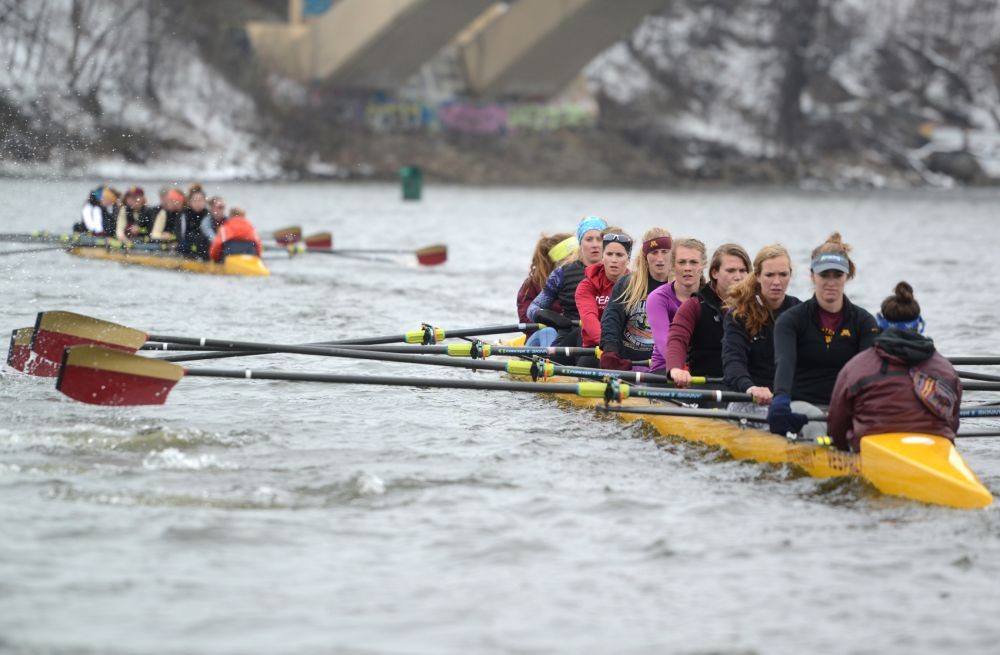 The rowing team practices on the Mississippi River on Mar. 23, 2015.

The Gophers leave victorious after opening their spring campaign at the Oak Ridge Cardinal Invitational, hosted by Louisville this past weekend. The two-day season opener was a starting point for the rowing team, where they found they could compete with top teams in the nation as they left with two first-place finishes Sunday morning.

“We were able to do things like experiment. We have two different boat types — and on day one we used boat type A in the morning and boat type B in the afternoon,” head coach Wendy Davis said. “And with experimenting, you can’t tell unless you’re under stress, and the only way to put them under stress is to race. So it was a huge informational gathering weekend for us.”

Minnesota edged out the Cardinals in the first varsity eight race, finishing in 6:10.765, compared to Louisville’s time of 6:12.933. Minnesota continued its winning streak by claiming first place in the second varsity eight, running a time of 6:17.921 and outlasted Louisville again, who finished with a time of 6:19.613.

“It’s really exciting for the team to leave the season opener with those two first-place finishes in our back pockets, and to know that’s a springboard for us for the rest of the season,” varsity rower Kortney Luedloff said. “To say that we are here, it’s a really good pivot point for Minnesota.”

In the first weekend of April, Minnesota will travel to Cherry Hill, New Jersey to compete in the Doc Hosea Invitational, the Gophers second event of the spring season. After their successful season opener, the team looks to continue their streak.

“On Saturday morning, we just went in and said let’s see where we stand, lets see what we can do,” varsity rower Lizsy Hiebel said. “Once we came out pretty neck-and-neck with some of the fastest teams in the nation. We realized we can start checking high ranked teams off our list going into the next few weekends.”