A game-by-game breakdown of the Gophers’ 2020 schedule

The Gophers' football team kicks off its season in 76 days. Here's who Minnesota will face in 2020. 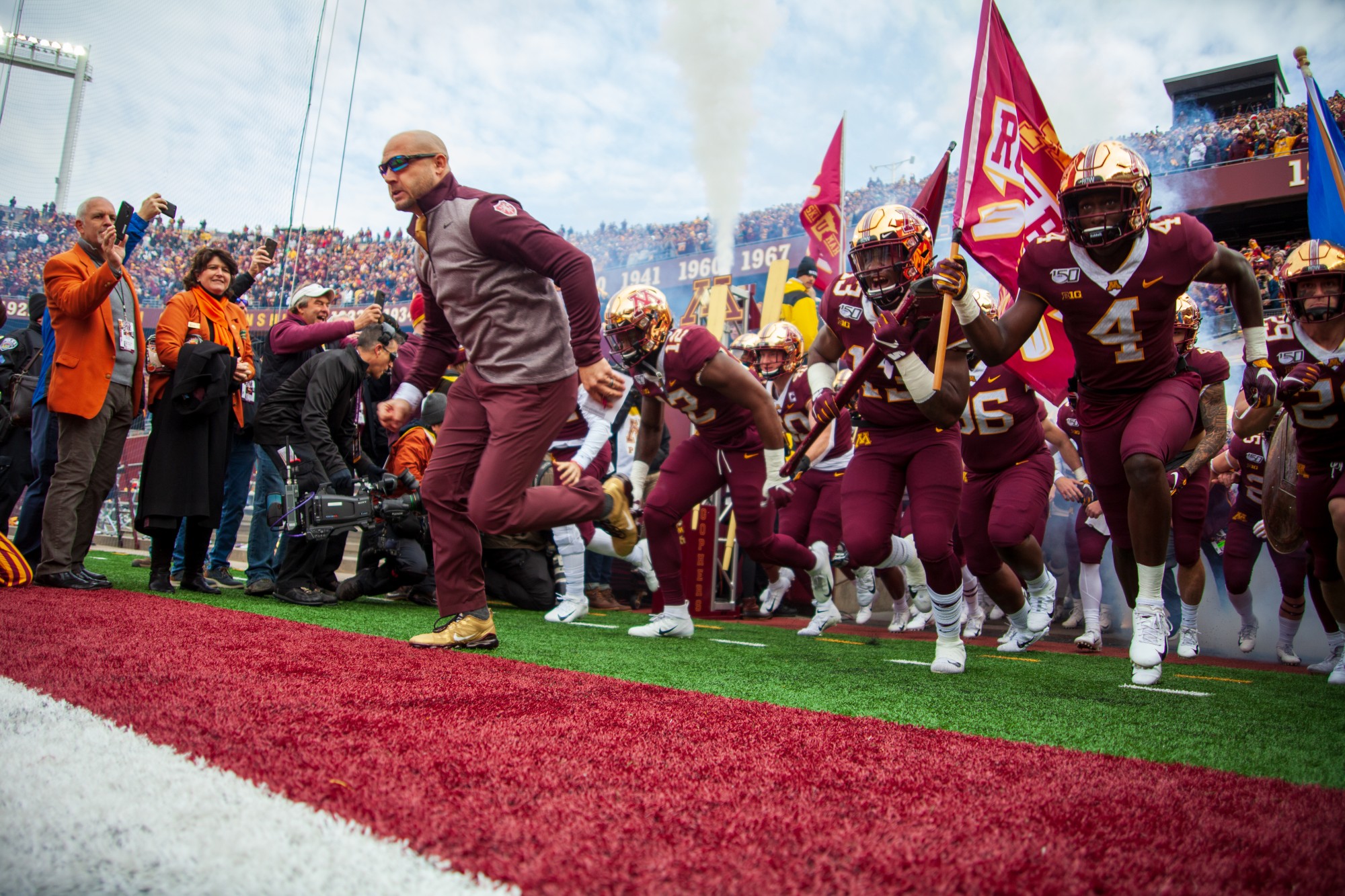 Head Coach PJ Fleck leads the team out of the tunnel at TCF Bank Stadium on Saturday, Nov. 9. The Gophers defeated Penn State 31-26 to bring their record to 9-0. A first since 1904.

With Gophers’ football players slated to return to campus and Big Ten universities already beginning summer workouts, teams are prepping to play the 2020 season as scheduled.

Minnesota is scheduled to kick off its season in 76 days. Here are the preseason storylines for the Gophers’ 12 regular-season opponents.

Taggart replaces Lane Kiffin, who led the Owls to an 11-3 record in 2019, including a Conference USA Championship and bowl victory. Kiffin departed to accept the head coaching position at Ole Miss.

The Golden Eagles compete at the FCS level and finished the 2019 season 6-6, their highest win total since 2011.

Tennessee Tech has the pieces on offense to improve once again in 2020, returning its leading passer, rusher and receiver from a year ago.

Since Kirk Ferentz became head coach in 1999, the Hawkeyes are 15-6 against Minnesota, including five straight victories.

Iowa saw five players selected in the NFL draft, including offensive lineman Tristan Wirfs in the first round. Other notable draftees include defensive end A.J. Epenesa, who recorded 11.5 sacks in 2019, and quarterback Nate Stanley.

Returning for the Hawkeyes are the team’s two leading rushers, sophomore Tyler Goodson and senior Mekhi Sargent, as well as the leading receiver, senior Ihmir Smith-Marsette.

Senior Josh Jackson is the presumptive starter at quarterback after appearing in 10 games last year. However, Alabama transfer Taulia Tagovailoa could compete for the job if granted a waiver from the NCAA to become eligible immediately.

Leading rushers in 2019, running backs Javon Leake and Anthony McFarland Jr. both departed for the NFL. Coming in to help on offense for Maryland is freshman wide receiver Rakim Jarrett, a five-star recruit, according to 247Sports.

Starting quarterback Jack Coan will return for his second season in Madison. Experts once again rank the Badgers among the nation’s best teams, but the matchup against Minnesota marks a tough stretch for Wisconsin, who will play Michigan and Notre Dame in the preceding two weeks.

Head coach Jim Harbaugh enters his sixth season at Michigan, where he’s still searching for a birth in the Big Ten Championship game. While Michigan hasn’t met expectations under Harbaugh, the team boasts 14 four-star recruits in its 2020 freshman class and projects as one of Minnesota’s strongest opponents next season.

Michigan will need to replace production in its passing game as quarterback Shea Patterson and wide receiver Donovan Peoples-Jones have moved on to the NFL. However the team’s top two receivers, Ronnie Bell and Nico Collins, return in 2020.

Illinois earned a bowl appearance in 2019, the first in the tenure of head coach Lovie Smith; however, the Fighting Illini are still seeking their first winning season since 2011.

Quarterback Brandon Peters returns as the starting quarterback alongside leading receiver Josh Imatorbhebhe. Illinois will have to replace its backfield duo of running backs Reggie Corbin and Dre Brown, both of whom graduated.

The Spartans were dealt a surprise this offseason when long-time head coach Mark Dantonio abruptly retired. Taking his place is Mel Tucker, who led Colorado to a 5-7 record as head coach last season.

Michigan State is facing key departures at multiple positions, most notably quarterback Brian Lewerke, who signed with the New England Patriots as an undrafted free agent.

Injuries derailed a promising season for Purdue in 2019. Fourth-year head coach Jeff Brohm will look to get his team back on track and will be aided by the return of star wide receiver Rondale Moore, who missed eight games last season.

The Boilermakers are also looking to settle on a starter under center. Quarterback Elijah Sindelar opted to medically retire after the 2019 season, leaving sophomore Jack Plummer and junior Aidan O’Connell as options for quarterback. Both saw significant playing time last season.

The Wildcats were hindered by an offense that ranked 126th in the Football Bowl Subdivision. The team will return running back Isaiah Bowser, the Wildcats’ leading rusher in 2018, who missed seven games due to injury last season.

After struggling with consistency in the passing game, Northwestern added quarterback Peyton Ramsey, a graduate transfer from Indiana.

In 2019, the Cornhuskers failed to take the step forward many were expecting under second-year head coach Scott Frost. Quarterback Adrian Martinez will need to recapture the success he enjoyed as a freshman after regressing statistically as a sophomore last season.

Sophomore wide receiver Wan’Dale Robinson, a second-team freshman All-American last season, offers impressive athleticism at receiver and will be pivotal in helping the team recover from the loss of leading receiver J.D. Spielman, who entered the NCAA transfer portal.