Osenieks engaged on, off the court

Oto Osenieks has been significantly more effective on the court this year. 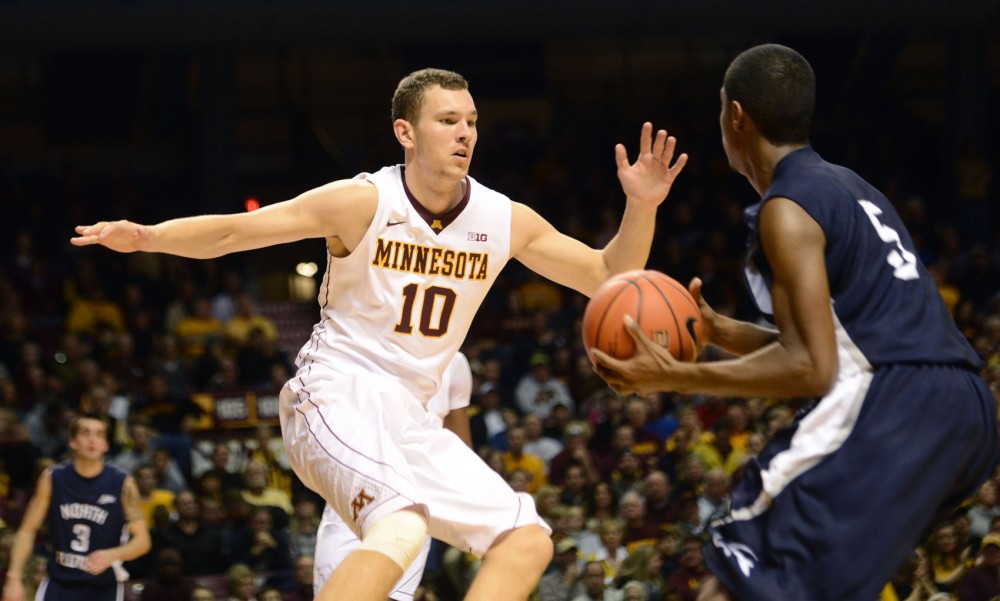 It was quite elaborate.

Osenieks spent Christmas at his girlfriend’s parents’ home. That’s where he set it up.

He bought his girlfriend, Laura McClemans, a large teddy bear and then placed a pair of Jordans on its feet. When McClemans took off the shoes and tried them on, she couldn’t fit one of her feet in — there was a ring in the way.

That’s when Osenieks dropped to one knee and proposed.

And that’s when McClemans — his girlfriend of nearly two and a half years — said yes.

“I was definitely surprised,” McClemans said. “It was all him. I think he’s had it planned out for a while.”

It was a well-thought-out, romantic move executed by a man with a newfound sense of confidence.

After all, there’s no reason for Osenieks not to be confident these days, both on and off the court.

The junior has held down the Gophers’ starting power forward spot since the beginning of the season.

He’s played major minutes and been a consistent contributor this season, after playing sporadically — and sometimes just not well — during his first two seasons with the Gophers.

“This is the year I feel like I can really show my game, finally,” Osenieks said. “Just play freely and help the team.”

He said becoming a starter changed his mentality. It forced him to focus more and continue to work hard, day after day.

That mental focus has shown in his numbers. His points (7.0), rebounds (3.3) and minutes per game (21.6) have all drastically increased this season.

A part of that has to do with his fit in first-year head coach Richard Pitino’s system.

Pitino said he likes his power forwards to be able to step outside and spot up for 3-pointers on pick-and-pop plays — something Osenieks has shown he is more than capable of doing.

“He’s shown that he can make big shots [in] big games,” Pitino said.

Osenieks is quick to credit some of his newly gained confidence to his starting role and the head coaching change that occurred in the offseason.

Osenieks said Pitino’s encouraging coaching style has had a positive impact on his game. He said he relates more to Pitino than former Gophers head coach Tubby Smith.

“[Oto is] more of a sensitive guy,” McClemans said. “I think he’s built more confidence in the last few years. I think coach Pitino does a really good job of making sure that he’s OK in the situation, and then making sure that he’s confident in playing. I think that really reflects on how Oto plays on the court.”

But another part of his confidence boost stems from his off-the-court success — including his thriving relationship with McClemans.

“If you’re happy and positive, then I think it will translate to your on-the-court [game] — help you play better and vice-versa,” Osenieks said.

He has experienced early success during the Big Ten slate and has scored at least eight points in five of Minnesota’s last seven bouts.

It’s going to take more of those consistently solid efforts from Osenieks for the Gophers to experience prolonged success in the midst of a grueling conference schedule.

“We believe that he can really help us a lot,” Pitino said. “He’s gotten a lot better.”

It seems everything has gotten better for Osenieks of late. With a starting role on a team that has a chance to earn its second consecutive NCAA tournament bid, a beautiful bride-to-be at his side and a wedding planned for June, there’s not much to complain about in the Oto-Zone.