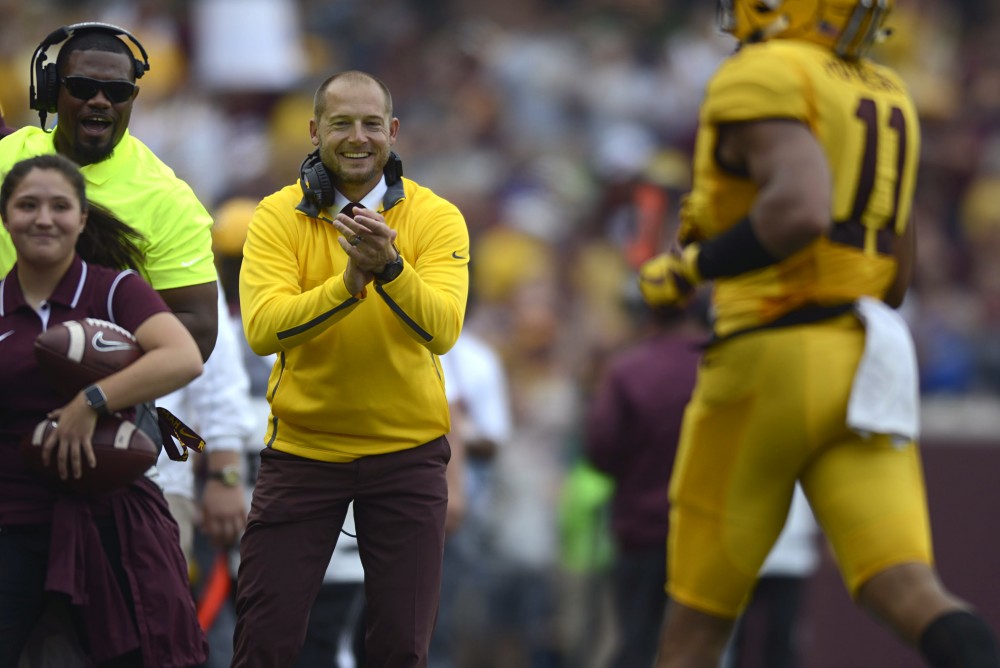 Head coach P.J. Fleck cheers on players after the Gophers scored a touchdown on Saturday, Sept. 16 at TCF Bank Stadium in Minneapolis.

Last season, P.J. Fleck stepped into his role as Minnesota’s head coach with around a month to hit the recruiting trail for his new team.

This year, Fleck had a full season to prepare for signing day, which resulted in the highest-ranked recruiting class in a decade.

The 2018 class is ranked at No. 28 nationally and No. 6 in the Big Ten, according to 247Sports. It is the second-highest recruiting since the website started the rankings, just behind the 2008 freshman class, which ranked No. 26. The 26 commits are made up of two 4-star recruits and 24 3-stars. The Gophers have the most commits of any Big Ten team this year.

“It shows the type of quality players that are giving up a lot of opportunities to come to the University of Minnesota,” Fleck said. “I think that’s part of the process of building this so everybody can see the proof.”

Last year’s class, recruited mostly by then-head coach Tracy Claeys’ staff, was ranked No. 59 in the nation and No. 12 in the Big Ten. Each of the 25 recruits were 3-star athletes, according to 247Sports.

With former Minnesota quarterback Demry Croft transferring to Tennessee State, the Gophers picked up the No. 1-ranked junior college quarterback in the country — Vic Viramontes on November 27 — just two days after the team’s season ended.

Viramontes is a dual-threat quarterback out of Riverside City College. He had offers from six other Division I colleges.

“[Viramontes’] film makes you say ‘wow,’” Fleck said. “It’s a long, long tape. Not just his highlight tape, but everything else he does in terms of his game tape.”

Fleck signed quarterback Zack Annexstad, too, but as a preferred walk-on to the class of 2018.

Fleck’s staff also made up for a lack of depth on the offensive line last season. The team nabbed seven offensive linemen in this year’s recruiting class. In the final days leading up to the 2018 class signing day, Fleck landed 4-star offensive lineman Curtis Dunlap and offensive lineman Daniel Faalele, who is a 3-star recruit via 247Sports. Both played for IMG Academy high school, which is located in Bradenton, Fla.

The two will be participating in the All-America game. Dunlap is the highest-ranked offensive lineman to ever commit to Minnesota since the rankings have been available.

Wide receiver Rashod Bateman was another 4-star recruit in Fleck’s 2018 class. Bateman turned down an offer from Georgia, which is his homestate. Bateman was one of Fleck’s earlier commitments to the 2018 class.

“You go through the year, this young man… had more than 25 offers at the end. In-state SEC, [college football] playoff teams SEC, ACC,” Fleck said. “I’ve never seen somebody with that many offers, and those offers in that state, and around that state, in the south, give up that to come all the way up here.”

Fleck stressed the importance of not having recruits flip their commitment.