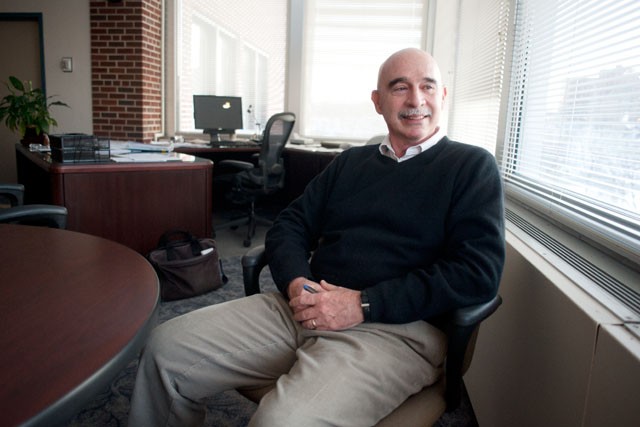 Dr. Aaron Friedman looks out the window of his new office on Monday in the Children's Rehabilitation Center in Minneapolis, Minn. Friedman takes over as the new dean of the Medical School and VP of the AHC.

Dr. Aaron FriedmanâÄôs taupe walls are blank.
His books are impeccably shelved away in short brown bookcases, and papers are neatly organized in stacks on his desk.
ItâÄôs not because heâÄôs still breaking in his office, Friedman said. HeâÄôs just perfectly organized.
ItâÄôs been just more than a month since Friedman left his post as chairman of the University of Minnesota Medical SchoolâÄôs pediatrics department to take over as dean of the Medical School and vice president for health sciences of the Academic Health Center.
âÄúItâÄôs a great learning experience, and I still have more than I need to learn,âÄù Friedman said of his first few weeks in the position. âÄúI could probably say that 10 years into the job.âÄù
But Friedman likely wonâÄôt have the chance âÄî itâÄôs a temporary job. He replaced Dr. Frank Cerra, who stepped down after 15 years in the position Dec. 31.
When University President Bob Bruininks announced Friedman as the replacement in mid-September, he said the appointment would probably last two or three years.
âÄúI thought, with a new president taking the helm in July, that I needed to make sure that he or she would have the opportunity to actually make the longer-term appointment,âÄù Bruininks said when the announcement was made.
The temporary nature of his new position doesnâÄôt make the work any harder, Friedman said.
âÄúThat time frame is long enough that things have to get done, and we canâÄôt sit around and wonder who the next person may be,âÄù he said.
On the short list of goals to accomplish during his temporary term is preparing the Medical School for its accreditation review in March of 2012 and combing through the school and the AHC to find potential money-saving cuts and changes that wonâÄôt affect quality.
âÄúNone of these can wait,âÄù he said.
Path to the deanâÄôs office
With a wealth of clinical and administrative experience under his belt already, Friedman arrived at the University in 2008 to chair the Pediatrics department.
Friedman graduated from Cornell University and the State University of New YorkâÄôs Upstate Medical School before heading to the University of Wisconsin, where he specialized in researching kidneys and caring for children with kidney disease.
He spent nearly 30 years in Wisconsin, working his way up to become chairman of the schoolâÄôs pediatrics department in 1996. Eight years later, he returned to the East Coast to lead the same department at Brown Medical School in Rhode Island for four years before coming to Minnesota.
Friedman never applied to replace Cerra.
His name was thrown in as a possible candidate by his colleagues in the pediatrics department. He received a call from Bruininks several weeks before the appointment was made, and the two began talking about making the switch.
Dr. Joseph Neglia was not among the pediatrics faculty who recommended Friedman, âÄúprobably out of selfish reasons,âÄù Neglia said. Though Neglia has since taken over as chairman of the pediatrics department, he was sad to see Friedman leave after such a short tenure.
In less than three years as chairman, Friedman brought organization to the department, helped improve the faculty review process and spearheaded the construction of the Amplatz ChildrenâÄôs Hospital that is set to open in April, Neglia said.
âÄúI think heâÄôs clearly up to the task,âÄù he said, noting that FriedmanâÄôs ability to work with people and solve complex problems will transfer well to the larger responsibilities he now has.
Another transition
Friedman began his transition into the deanâÄôs office with Cerra back in October âÄî accompanying him to meetings on campus and exchanging critical background information that âÄúisnâÄôt necessarily written.âÄù The two are still exchanging e-mails regularly, Friedman said.
While that process is ongoing, Friedman will begin meeting with Eric Kaler, who will become the UniversityâÄôs next president in July, to brief him on the relationship between the presidentâÄôs office and the AHC.
Kaler will eventually appoint a permanent replacement for Cerra.
âÄúMy hope for the Medical School is that Friedman does such an exceptionally good job that Kaler would welcome him staying on,âÄù Neglia said.