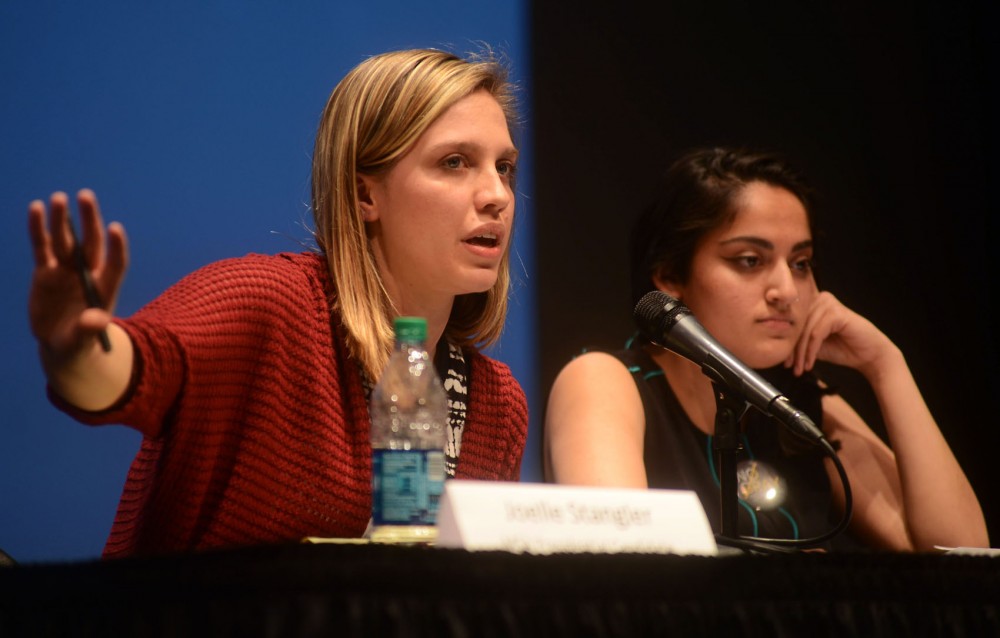 Minnesota Student Association presidential candidate Joelle Stangler talks about her visions for the student group's future at the election debate at Coffman Memorial Union on April 8. Stangler was elected MSA president on Saturday.

Parker Lemke
Voters chose Joelle Stangler to serve another term as Minnesota Student Association president on Sunday in a competitive election that covered a wide range of topics, from the inclusivity of student government to the University of Minnesota’s response to mental health issues.
Stangler and her running mate Abeer Syedah won nearly 56 percent of the vote, while challengers Henry Benson and Cameron Holl lost.
“I think my first reaction was, ‘Great, now I can get back to work,’” Stangler said.
Voter turnout nearly doubled compared to last year, according to a statement to candidates from the All-Campus Elections Commission.
In a Sunday interview, Stangler said the election’s high voter turnout increased the results’ legitimacy and represents the two campaigns’ high level of competition.
Though the election’s outcome wasn’t what he had hoped for, Benson said he was proud that he brought forward important issues during his campaign, reached a large number of voters and showed that support for MSA’s current leadership isn’t unanimous.
“We went into this election knowing we would have an uphill battle,” Benson said. “We were pretty proud that we were able to take 44 percent of the vote.”
A third candidate for the presidency, Prahith Chakka, dropped out of the race last week and endorsed Benson.
Benson said the campus’ discussion on students’ mental health issues was one of the many conversations that his campaign helped bring forward during the election season.
Both campaigns successfully got their messages out, Stangler said, adding that Benson’s campaigning played a big role in getting more students to vote.
“I think a competitive election gets people interested,” Stangler said.
Along with her race’s results, Stangler said she was excited to see all but two of the candidates she endorsed for at-large representative and student senator positions won.
And Stangler said not all of the candidates she endorsed agree with her viewpoints. As a result, Stangler said she thinks a variety of opinions and voices will be included in student government conversations in the upcoming year.
Benson said he plans to continue to take part in student government and focus on mental health issues and making sure people with differing views have a voice within the organization.
Moving forward, Stangler said it’s important for people to remember that MSA’s role is that of a lobbyist group for all students, which requires building relationships with the school’s administration.
“We’re not a governing body — we’re an advocacy body,” she said.
Delete Image
Align Left
Align Center
Align Right
Align Left
Align Center
Delete Heading