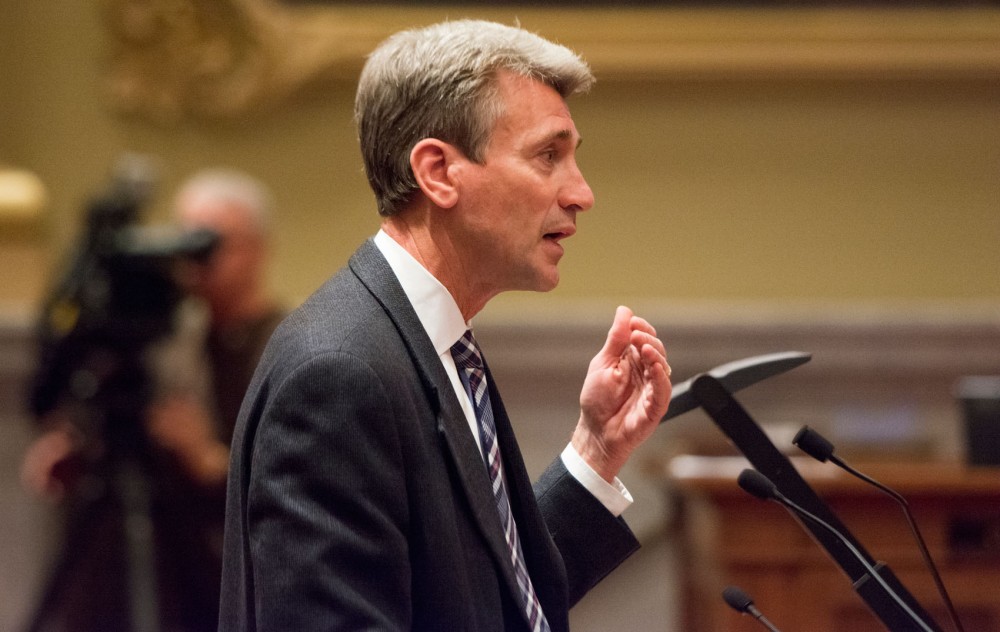 Minnapolis Mayor R.T. Rybak begins a proposition for the renovation of the Target Center in downtown Minneapolis before the City Council on Thursday.

With the first new mayor in 12 years and a city council in flux, this election could offer the most sweeping changes to Minneapolis City Hall in recent history.

Because power in Minneapolis government is fractured among many offices, experts and candidates agree Minneapolis’ next leader will have to focus on building consensus rather than governing from the top down.

Minneapolis government is often described as a weak-mayor system, but the position’s power ultimately depends on the mayor’s personality and leadership style.

In Minneapolis, the mayor proposes the budget, has some appointment powers and either signs or vetoes policies passed by the City Council.

But the council can override any mayoral veto with a two-thirds majority, or nine votes out of 13 members.

St. Paul Mayor Chris Coleman said a strong leader in Minneapolis can accomplish a lot, even though the mayor is in a “weakened position” in the city’s structure.

“I’m not only the mayor, but I’m also CEO of the city,” Coleman said.

Compared to the mayor of Minneapolis, Coleman said it’s easier for St. Paul’s leader to make decisions on his or her own.

“Ultimately, the buck is more likely to stop here at my desk than in Minneapolis,” Coleman said.

This year’s election will likely keep St. Paul’s status quo. Coleman is favored for re-election, and only one of the seven City Council seats is open.

But frontrunners in the pool of 35 candidates to succeed Rybak are varied, and it’s unclear how the new mayor-council dynamic will play out in Minneapolis.

Some candidates agree on major city issues, like closing the achievement gap in public schools. But how they’ll address them in a fractured-power system is still an open question.

“We are looking at some very different styles, and in a weak-mayor system, there’s a lot of uncertainty as to what that would mean,” University of Minnesota political science professor Larry Jacobs said.

Most leading candidates stressed the importance of building close ties with council members to diffuse any tension that disagreements could bring.

“When you cultivate a personal relationship, it breaks down a lot of the distrust that people might have if you just start out from a policy position,” independent candidate Cam Winton said.

Jacobs said some candidates, like former Hennepin County Commissioner Mark Andrew and Ward 5 City Councilman Don Samuels, could bring an outgoing, charismatic style to the office like Rybak has.

Candidates also emphasized the mayor’s power to propose the budget, which is subject to City Council approval.

Though candidates have ideas for how they would lead Minneapolis if elected, Hamline University law professor David Schultz said external pressures could force them to change their vision.

Rybak had to deal with the 2008 recession, cuts to local government aid under former Gov. Tim Pawlenty, and many different personalities on the Council, Schultz said, and all those factors affected how he led the city.

“It’s not just your personality. It’s not just the formal trappings of the office,” Schultz said. “It’s also the circumstances into which one is situated that help determine what you’re going to look like as mayor.”

Taking from the past

Independent candidate Dan Cohen said the tension between former Mayor Arthur Naftalin and the City Council in the 1960s led to a competition for power and recognition between the two groups.

Though Naftalin frequently referred to the City Council as the “student council,” Cohen said, his lack of interest gave the Council a free hand to drive city policy. In order to govern effectively, Cohen said the two parties have to be able to work together.

“I think that concern — who gets the credit — is more for newcomers to the system than it is for people who’ve been there a long time,” Cherryhomes said.

During his tenure, Rybak used his office’s visibility to rally public support for projects like the Vikings stadium while working behind the scenes with council members. Some leading candidates cited the mayor’s ability to reach swathes of citizens as one of the office’s significant powers.

“The mayor enjoys a megaphone the members of City Council do not have,” Winton said. “It’s the mayor singlehandedly charting a vision for the city.”

Rybak acknowledged his office’s visibility but said his job is much more detail-oriented than many assume it is.

“People will often say, ‘R. T. is a cheerleader,’ which I take as sort of a compliment,” he said. “But also, [it] frankly underestimates the dramatic amount of work I do on day-to-day running the city.”

Cherryhomes said she disagrees with those who call the mayor’s job an external role rather than an internal one. The mayor’s ability to follow through on initiatives he or she promotes is more important than reaching the public through a bully pulpit, she said.

“I think that that’s something that gets lost in the translation,” Cherryhomes said.

Hodges said openly charting a vision is only half of the equation and a mayor must also be able to build consensus.

“When you step off that platform and put the bullhorn down, you have to have the people at the table needed to get things done,” Hodges said.

Whoever is elected will have to deal with sweeping changes to the City Council.

Incumbents in four council races have chosen not to run for re-election, so almost a third of seats are guaranteed to change hands. And with all but two other seats contested, Minneapolis government could see more freshman leaders than those with prior experience.

The leading candidates stressed that even when factions and political rivalries cloud work in City Hall, everyone at the table is ultimately elected to serve citizens.

And for those concerned that a largely fresh leadership may not set the right course for Minneapolis, Rybak cited the election that brought him into office more than a decade ago.

“I would encourage anybody who’s worried about the next mayor and council to just calm down,” he said. “Twelve years ago, this untested mayor who’d never served in office and … a rookie-dominated council came in to predictions of chaos. I think we did pretty well.”