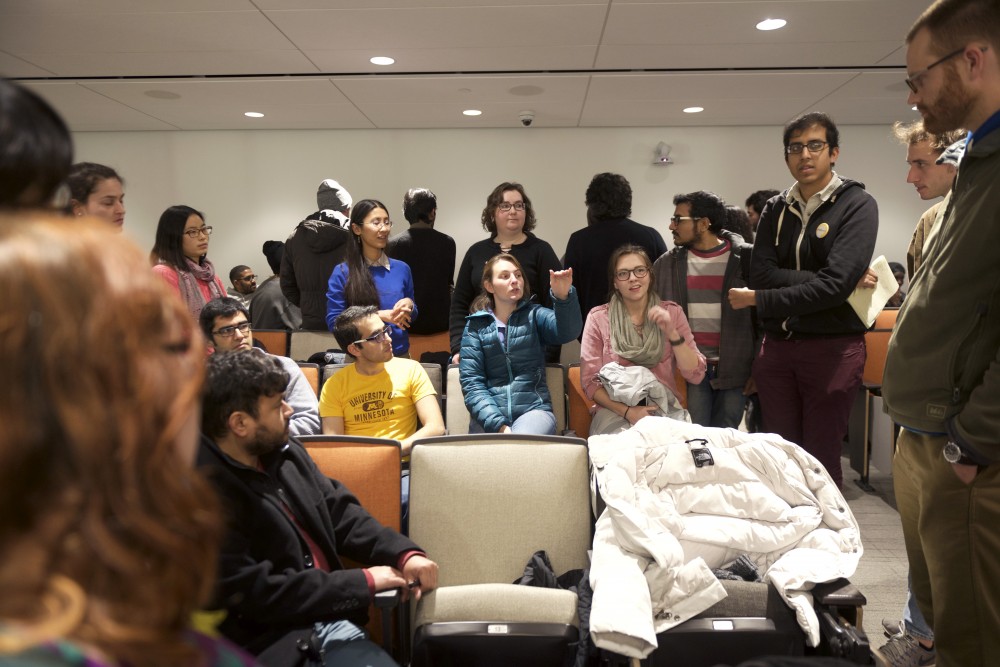 Lisa Fazzino, a University grad student, talks about the tuition tax change in a small group on Tuesday Nov. 21 in the Tate lab on East Bank.

The tax proposal, which passed in the U.S. House of Representatives last week, contains a section that would count tuition reductions for teaching assistants as taxable income.

The bill is up for a vote on the Senate floor next week.

In response to the bill, Vice Provost and Dean of Graduate Education Scott Lanyon sent an email to all graduate students on Nov. 10, encouraging them to take action by contacting their representatives and Sens. Al Franken, D-Minn. and Amy Klobuchar, D-Minn.

“This is an unfair shifting of burden to those who can least afford to pay the tax,” Lanyon said in the email. “As teaching and research assistants, you provide critical services to the University.”

“College … is hard enough,” Miller said. “I don’t think students should have to think about the government making their life hard.”

Miller said he works with students to make sure legislators hear student input. Even if legislators vote the bill into law, he said the job of student advocacy is to make the vote less comfortable.

Amanda Wolfson, a fourth-year Ph.D. student in Germanic studies, said the bill might not affect her directly since she has funding secured for the year, but she worries for her colleagues and the future of academia.

Wolfson said she received advice from a past adviser that if she had to pay for a graduate program, it wasn’t worth it.

Many students in graduate school already have student loans from undergraduate education and additional loans would discourage people from pursuing continued education, she said.

“What we’re really losing is the inherent value of academic inquiry,” Wolfson said.

She said it will have a more drastic effect on students in the humanities, who often rely on teaching assistant and research assistant positions to pay for their programs.

Frechette depends on a fellowship to pay for a large portion of her tuition.

“It would make life really, really hard,” she said.

Frechette said it is infuriating, adding that if the bill passes, she thinks it would be harder for underrepresented students who may not have another source of income to pay for school.

“It confuses me a little bit why our government is focusing on … this,” Frechette said.