With defenses focused on Tyler Johnson, Bateman is adding an extra playmaker to the offense. 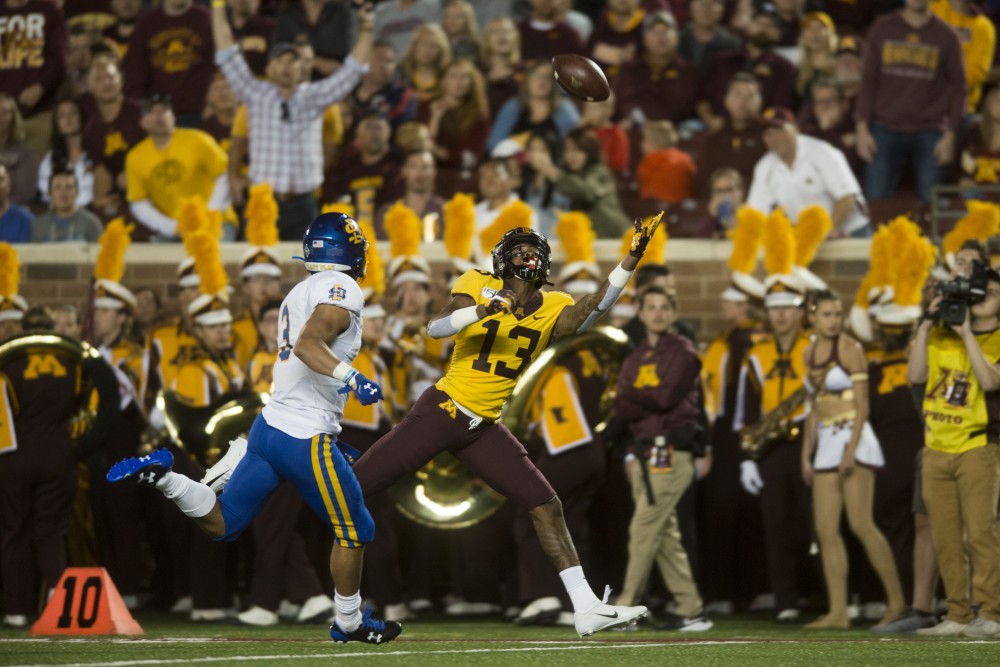 Everyone knows about Gopher’s senior star wide receiver Tyler Johnson. However, it’s another receiver who will be just as crucial to the Gopher’s success in 2019: sophomore Rashod Bateman.

Coming into the season, Johnson received much of the attention on the offensive side of the ball, and rightfully so. Johnson is coming off a year where he had 1,169 yards receiving to go along with 12 touchdowns, both program records for a single season.

Yet, after a successful freshman campaign, opponents might want to start paying attention to his running mate, Bateman.

When South Dakota State double-teamed Johnson throughout the first game of the season, it was Bateman who stepped up to give the offense the receiving threat it needed. He ended up finishing the game with five catches for 132 yards receiving. One of those catches was a one-handed highlight reel 42-yard touchdown. The catch was displayed all over social media and major sports networks.

“It was an elite catch,” quarterback Tanner Morgan said after the game. “Rashod is one of the hardest working guys on this team. I’m just blessed to have [Bateman] out there.”

With Johnson receiving more attention from opposing defenses this year, offensive coordinator Kirk Ciarrocca highlighted how important it is to have a receiver of Bateman’s talent opposite Johnson.

“I think Rashod has let people know, ‘Hey, I can be a real force out there on the field,’” Ciarrocca said.

“I feel like what I did last year doesn’t apply to this year,” Bateman said. “I feel like I’m a different person. A lot of people think it’s just individual, just me by myself, but it’s not. I got a lot of help from my teammates.”

A Tifton, Georgia native and four-star player coming out high school, Bateman chose the Gophers over SEC schools such as Georgia and Texas A&M. To this day, Bateman is one of the highest rated recruits that Fleck has brought to Minnesota.

“I fell in love with Minnesota,” Bateman said. “I’ve thought about it, I think I’m going to retire and live on Lake Minnetonka. I love it here.”

As the season approached, Bateman received devastating news. Anthony Bateman, Rashod’s uncle and father figure passed away. Anthony was Bateman’s receiver coach and assistant basketball coach in high school. He also provided Rashod with rides home, shelter and clothes whenever he needed it.

“He was always there,” Bateman said. “It was just that type of bond that we had.”

Fleck had high praise for the way Bateman handled the passing of his uncle.

“To watch him go through all that. Go back home, come back, go through grief. Have some tough days at practice, open up and talk about it. Losing the biggest male figure in his life two weeks ago and play like that, that’s what it’s all about,” said Fleck after last Thursday’s game.

With high praise from players and coaches about his relentless work ethic, Bateman knows he still has room to improve at the wide receiver position.

“I just feel like I can still work on my route running and being physical through routes,” said Bateman. “As this season goes, I’m going to continue to work on it.”

As for his highlight catch in the opening game of the year, he has watched it a lot less than every other Gopher fan.

“Maybe twice,” he said. “I still got a whole season ahead of me, so I’m just trying to stay locked in for my teammates.”