Mark Valdez returns to the Mixed Blood to direct “Elemeno Pea,” a lightning-fast dramedy that tackles class warfare, Martha’s Vineyard and what happens when the two bump elbows. 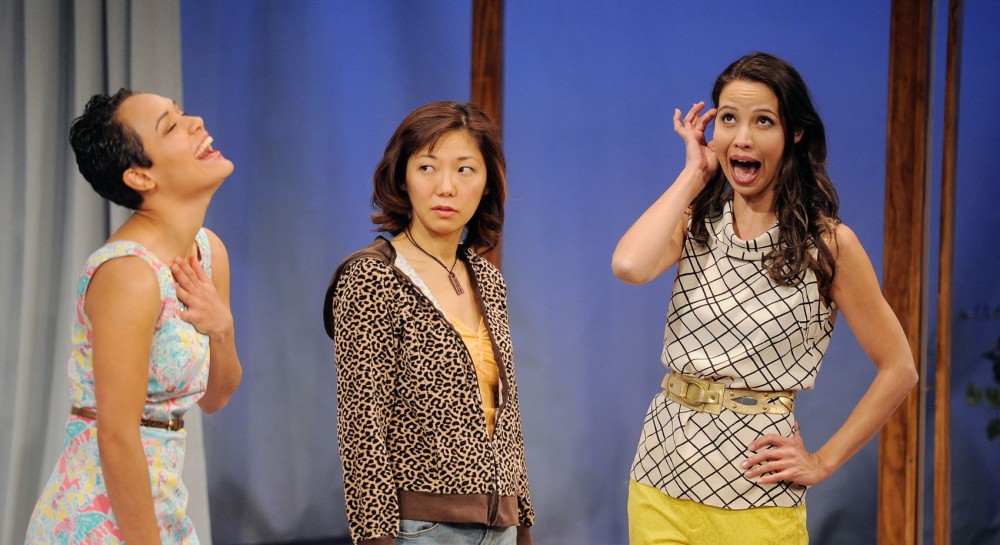 Cost: $20 or free under Mixed Blood’s Radical Hospitality policy, which seeks to break down economic barriers to theater

Mark Valdez leaned his arm against a bright yellow cushion in the auditorium of Mixed Blood, hand to his chin. After a nod to the stage manager, the room filled with the chorus of “Jenny from the Block.” It only took 15 seconds for the song to receive a shaking head from the director of the mordant satire “Elemeno Pea.”

“I’m trying to figure out how to start the play,” he said.

Although the beats of J-Lo’s jam about cash weren’t on point for Valdez, her themes were. Money and how it morphs the world are subjects he’s been trying to get to the core of for two weeks.

“Our challenge is to make sure that we don’t hit people over the head with any of these ideas,” he said. “We’re not going to make it more than what it is.”

“Elemeno Pea” takes place in the heart of Martha’s Vineyard, Mass., abound with yuppies and yachts named after the characters who own them. The piece brings forth a conflict between two sisters, Devon and Simone, the latter of which has been working as a personal assistant for the trophy wife of a fabulously wealthy New York ad man. When Simone invites her sister from working-class Buffalo to come stay with them for a bonding weekend, cultures clash and relationships simmer as social judgments are revealed, along with some troubling family secrets.

Molly Smith Metzler’s sarcastic comedy draws actors in and encourages them to dive deep into its characters. According to Ron Menzel, the actor who plays Ethan, a self-absorbed denizen of the Vineyard, “Elemeno Pea” takes personas that could easily fall into stereotype and makes them human.

“I get paid to take things personally,” he said. “We want to honor who these characters are without commenting on them too much.”

But fellow ensemble member Laurine Price, the performer behind “quintessential trophy wife” Michaela, insists there is a happy balance between caricature and character.

“I watched a lot of ‘Revenge,'” she said, referencing the ABC soap opera. “You know, the hands and the claws and the hair — she’s throwing things! But she’s the exact opposite of ‘What you see is what you get.’”

In a phrase, that’s the essence of “Elemeno Pea.” Valdez has made it his goal to bring out what’s beneath the veneer of these people to depict the larger themes of the play: class, power and the staggering effects of perception.

“[Ethan’s] easy to laugh at because he wears pink pants. But the pink pants are not a costume — that’s actually how he dresses. And it’s not just him. There’s a whole community of people, and these are just clothes,” he said.

Although the pants aren’t the point, seeing whether the audience interprets them to be is pertinent to Mixed Blood, considering the theater has a Tweet Seat event built into this production. The fad, which allows viewers to sit in designated sections and live-tweet performances, has swept the theater world.

“It’s about allowing somebody to engage in a way they want to engage. I was in China, probably like five years ago now, and literally, the glow from the house was as bright as the stage,” Valdez said.

While this trend could be considered a distraction from the intimacy of theater, Valdez asserts that it’s all about the discourse. The themes of race and interclass relations in “Elemeno Pea” could be better understood with the help of tweets and discussion points from Mixed Blood’s vocal audience.

“This is an audience that has been coming here for 35-plus years and has been engaging in conversations about race and class,” Valdez said.

“They can get into the nuances of it in wonderful ways, in ways that may be more challenging in other theaters.”