A student group teams up with a city groups to bring art to the public. 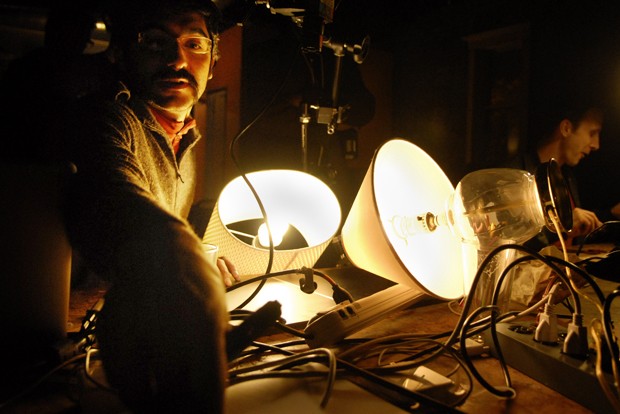 Of all the reasons to return home to Istanbul , projecting art onto the historic Galata Tower during a massive LGBT festival was not how Sinan Goknur pictured it. But the computer science graduate student, who moved to the U.S. last year, didnâÄôt expect to become so deeply involved with the group Minneapolis Art on Wheels either. âÄúIt was the type of work that was at the intersection of technology, arts and politics,âÄù he said. âÄúI think itâÄôs extremely exciting and I really believe in the work they started.âÄù Minneapolis Art on Wheels, a group of University of Minnesota students who roam the city on homemade mobile contraptions and project art onto large-scale backdrops, is beefing up its program this year with weekly performances and new software that allows audiences to participate using iPods . Since its conception in the spring of 2008, the program has had students traveling throughout the United States to places like Montana, Nevada, California and Iowa as well as internationally to countries including Hungary , the Czech Republic , China and Turkey . The projections are never lacking in originality, and have included countless illuminated sketches, shadow puppets, live musicians, actors and word art. Each Wednesday at dusk, the group will meet in the new West Bank Social Center headquarters âÄî located above the Nomad World Pub âÄî and project their creations from the windows onto a large wall below, near the NomadâÄôs bocce ball court. They will try to utilize the iPod software at each weekâÄôs performance, research assistant Andrea Steudel said. Ali Momeni , the art professor who founded and continues to teach a course associated with the group called Art on Wheels, said he purchased 10 to 15 iPod Touches through grant funding which are distributed to audience members during performances. The portable media players have the ability to communicate with the groupâÄôs software through wireless internet. Participants can alter the projection by holding and touching the devices in different ways. Eventually, the group hopes to have the software configured so people can use their own iPods to interact with the groupâÄôs software. âÄúThat would be our greatest dream,âÄù Steudel said, âÄúif people who are showing up who have that technology already could plug into what weâÄôre doing.âÄù The WBSC is a community gathering place which has hosted special community programming since August. Momeni said he approached the people who rented the WBSC space about the collaboration. âÄúWhen that space came together I came and said I wanted to support that project however I could,âÄù he said. Although Art on Wheels didnâÄôt have any research assistants during its first semester as a course, it now has four; a result of funding that wasnâÄôt there originally. The group received a number of grants, the largest being $250,000 from the Minnesota Futures Grant Program in the summer of 2008. The Office of Information Technology provided another $37,000 in the spring, money that comes from student service fees. The course also has two undergraduate work-study employees and usually around four or five people who participate intermittently, Steudel said. Art on Wheels, a course within the UniversityâÄôs Interdisciplinary Program in Collaborative Arts , is always looking for more research assistances, Momeni added. The original idea for the group came from a desire to link the cityâÄôs rich bike community and active art community in a way that incorporated technology, Momeni said. Art on Wheels provides a way to engage the public in the art-making process, Steudel said. âÄúWeâÄôre curious about public space and where people are allowed to be in urban spaces for long amounts of time even when they donâÄôt own the space,âÄù she said.