The Gophers came out of Ann Arbor, Michigan with a tie and a win after Robson saved 86 of 91 shots faced in the series. 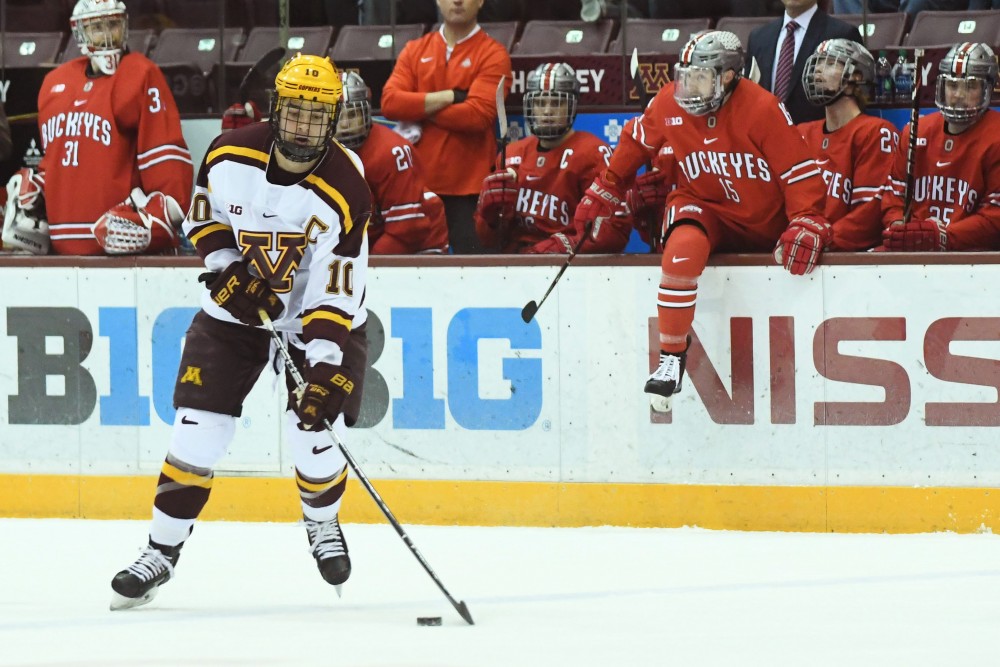 Senior Brent Gates Jr. skates with the puck during the Gopher game against Ohio State on Friday, Nov. 30, 2018 at Mariucci Arena.

Minnesota’s men’s hockey team tried to get back on track this past weekend.

Though Gophers forward Brent Gates Jr. tallied the tie-breaking goal late in the third period to put the Gophers ahead 4-3, it was goaltender Mat Robson who saved the game for Minnesota. He stopped 50 of 53 shots on goal in the series finale against No. 15 Michigan on Saturday.

Gates, a Michigan native, redirected a shot from defenseman Jack Sadek with 1:41 left in the third period to give the Gophers a 4-3 win, good for a series victory over Michigan on Saturday at Yost Arena. Minnesota and Michigan tied the first game 2-2, but Minnesota lost the extra Big Ten point in double overtime.

“This has been a crazy high-high, low-low first half, but I was reminded that we’ve only lost one game in our last seven,” Gophers coach Bob Motzko told reporters after Saturday’s game. “Our staff was talking before the game about if we could just get a signature win, especially on a night like tonight, that could be something we could take home with us.”

Robson saved 86 out of 91 shots in total over the two games at Michigan. His acrobatic performances have allowed the Gophers a chance when they have been far out-shot in the last four games. Robson faced 165 shots in the past four games and Minnesota mustered 87 of their own against the two ranked opponents.

“Just typical [Robson] tonight. He’s definitely the best goalie I’ve ever played with,” Gophers forward Brannon McManus told reporters. “You want him on your team, and he’s probably frustrating for the other team. He’s the heart and soul of our team right now.”

Captain Tyler Sheehy scored his 50thcareer goal in under a minute played in the third period to tie the game 3-3. The Gophers started with a 2-0 lead on goals from McManus and Sampo Ranta in the first five minutes of game play.

But Michigan came back thanks to the Pastujov brothers. Nick Pastujov scored the first at 12:17 after Gophers defenseman Sam Rossini overcommitted to Pastujov’s teammate on the other side of the ice. Less than two minutes later, Michael Pastujov scored on a back-handed wrap around to make the score 2-2. Robson faced 18 shots in the first period to 10 for Minnesota.

Michigan took a 3-2 lead after Robson mishandled the puck and gave Michigan forward Josh Norris an easy goal at 13:01 to play in the second. But Minnesota came back with two goals of its own to take a win after three straight double overtime ties. It was their first win since Nov. 23 against Michigan State.

On Friday night, the Gophers tied 2-2 for the third consecutive game. They officially tied but lost the extra Big Ten point in a 3-on-3 double overtime period at Yost Arena. The Gophers got up to a 2-1 lead thanks to goals from freshman Sammy Walker and junior Rem Pitlick within two minutes of each other in the second period.

Michigan came back to tie the game up in the third period and get the extra point in the second overtime. The Gophers dropped the third consecutive extra Big Ten point in double overtime after ending in 2-2 ties with two games against Ohio State at home the weekend before.

Robson had 36 saves in the first game, and started his fourth consecutive game on Saturday to tally 50 saves. In the last four games, Robson had a 94.5 percent save percentage on 165 shots on goal.

Minnesota now enters a three-week holiday break. The Gophers have played 15 games and have 20 to go on the schedule.