Morgan set a program record with 26 passing touchdowns in 2019. 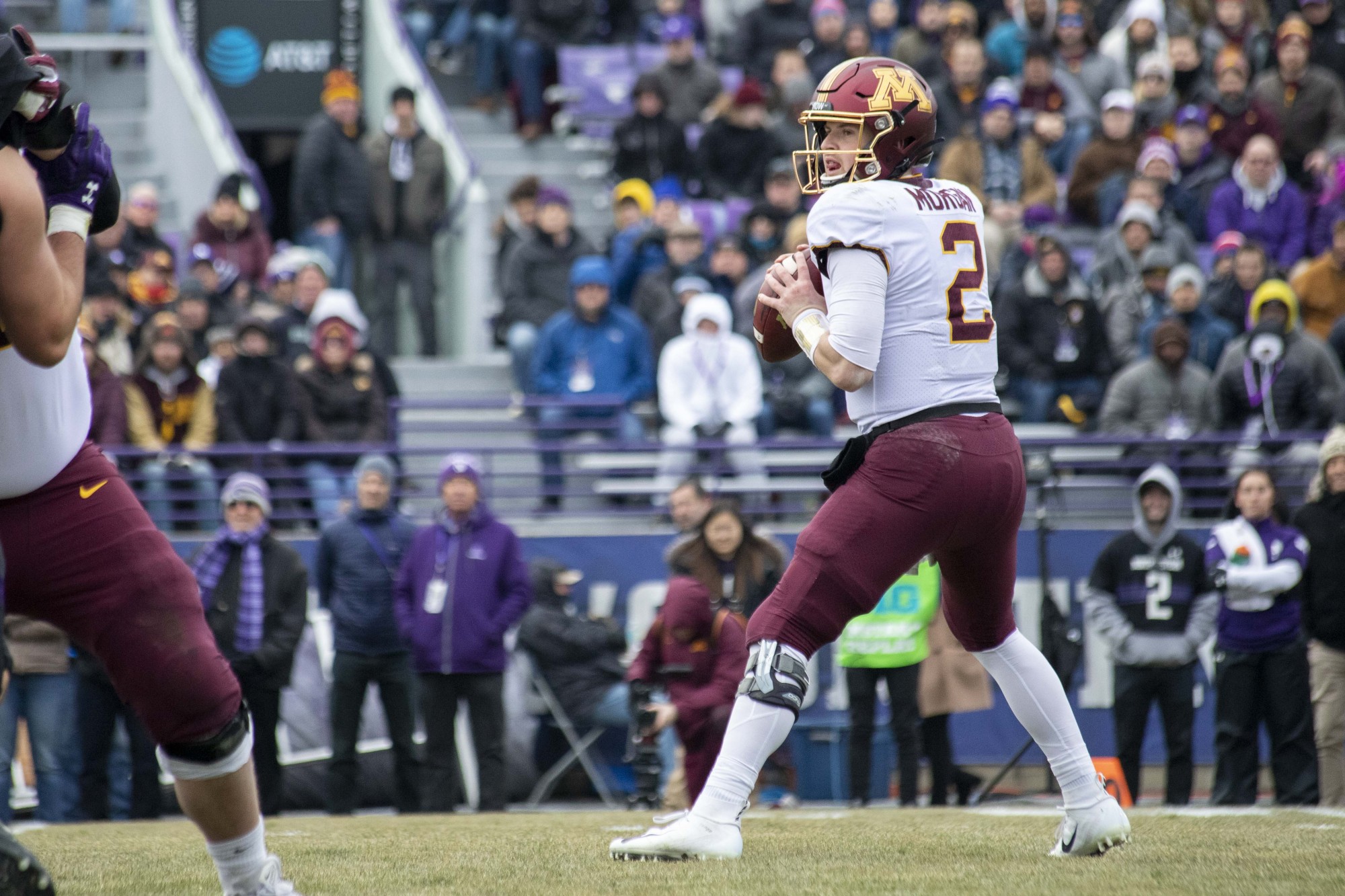 Quarterback Tanner Morgan looks to throw the ball at Ryan Field during the game against the Northwestern Wildcats on Saturday, Nov. 23. The Gophers earned a 38-22 victory bringing their record to 10-1.

On the final drive of Minnesota’s 23-19 loss at Iowa last week, quarterback Tanner Morgan absorbed a hard hit from Hawkeyes defensive end A.J. Epenesa. After trainers attended to him on the field, Morgan left the game, missing the Gophers’ final two plays.

Earlier this week, head coach P.J. Fleck announced that Morgan was in concussion protocol, leaving his status uncertain for Minnesota’s game against Northwestern. Just before kickoff, news broke that Morgan was cleared to play. Getting the start under center, Morgan showcased his value, passing for 211 yards and four touchdowns in a 38-22 victory.

“I’m just thankful I had a training staff and coaching staff that got me ready to play today,” Morgan said. “I was able to play today because of them and the things they do, just taking it day by day.”

Immediately, Morgan showed any lingering effects of his injury would not affect his play. Offensive coordinator Kirk Ciarrocca’s game plan turned Morgan loose from the Gophers’ very first offensive play, when he completed a pass to senior Tyler Johnson for 14 yards.

“We knew we had to come out fast, come out firing,” Morgan said. “Last week we didn’t feel like we started fast at all so we wanted to come out here, start fast and just do what we do to execute on the first drive and set ourselves up for success.”

Morgan completed all three of his pass attempts in the opening drive, culminating in a 19-yard touchdown pass to sophomore Rashod Bateman. Each of Morgan’s first three attempts moved the chains for a first down before the final one capped the drive with the game’s opening score.

“I really didn’t know where I was on the field,” Bateman said. “I was just toe-tapping and hoping I was in the end zone. I guess that’s where I ended up.”

Minnesota’s subsequent two drives looked no different, with Johnson and Bateman consistently outmatching Northwestern’s secondary. Morgan showcased his accuracy, going 9-10 for 135 yards on the Gophers’ first three offensive possessions. On all three drives, Minnesota reached the end zone, including a 10-yard completion to Bateman with 12:03 left in the second quarter which made the score 21-0.

Late in the first half, a pair of errors by Morgan temporarily stalled Minnesota’s offense. First, he was penalized for intentional grounding in his own end zone, resulting in a Northwestern safety. With 39 seconds left until halftime, Morgan forced a ball into double coverage and was intercepted, denying the Gophers an opportunity to extend their lead before the break. It was Morgan’s first interception since Oct. 26.

Upon receiving the ball to begin the third quarter, the Gophers leaned on running backs Rodney Smith and Shannon Brooks, who picked up a pair of first downs each to reach the Northwestern red zone. Morgan took over from there, converting a third-and-10 to Bateman. The sophomore receiver then hauled in his third touchdown of the game when Morgan lobbed a back shoulder fade to him in the corner of the end zone.

One more touchdown pass, this one a 17-yard completion to Johnson, put an exclamation point on Morgan’s performance. Saturday was the second time this season Morgan threw for four touchdowns in one game. Now with 26 passing touchdowns on the season, Morgan has broken the previous program record of 24 set by Adam Weber in 2007.

“That’s not just a Tanner Morgan thing,” Morgan said of the record. “There’s a lot of aspects that go into that. There’s coach Ciarrocca, the offensive line, the receivers, so it’s not just an individual thing at all, but it’s cool.”

Johnson and Bateman both caught seven passes against Northwestern for 125 and 78 yards respectively. The duo became the first pair of receivers in Minnesota history to surpass 1,000 receiving yards in the same season.

The Gophers will count on a healthy Morgan to lead them to one more victory in the regular season when they meet Wisconsin next Saturday with the Big Ten West title on the line.

“We’ll celebrate today, get back in tomorrow, and get ready to work,” Johnson said. “Wisconsin is a great team and we’re looking forward to getting out there.”