The sophomore heavyweight won 25 straight matches to end the season. 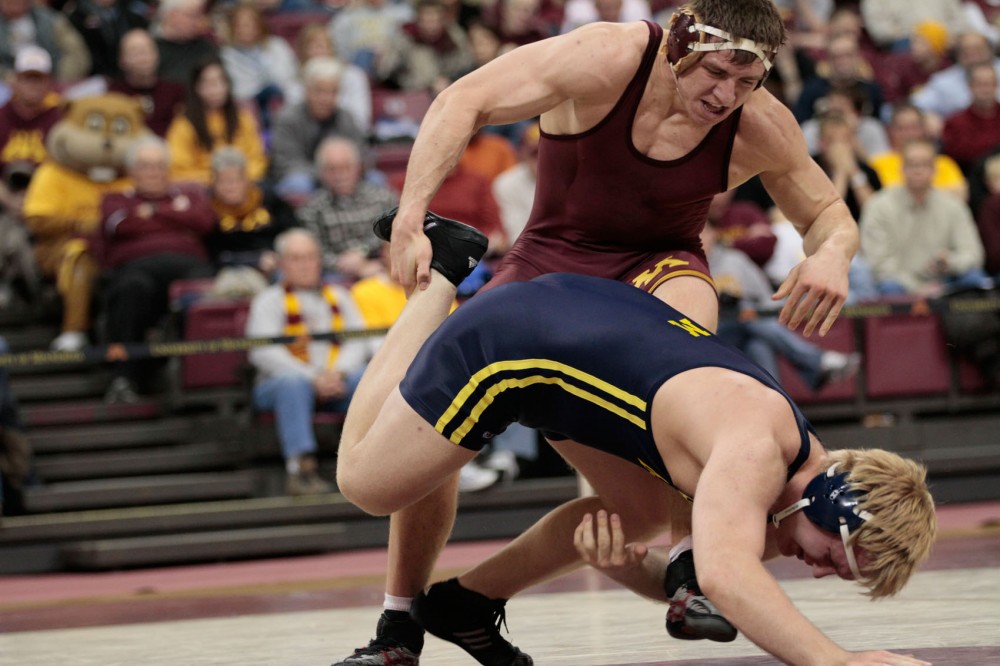 Minnesota freshman Tony Nelson wrestles against a Michigan opponent Jan. 27 at the Sports Pavilion. Nelson was honored at the banquet Sunday after winning the NCAA Wrestling championship in March.

Before the banquet held at a Minneapolis hotel, Nelson spent the weekend in Cambridge, Minn., being honored by his hometown. His former high school had a pep fest for him and Cambridge Mayor Marlys Palmer proclaimed April 27, 2012, “Tony Nelson Day,” which the soft-spoken Nelson described as “pretty neat.”

Nelson was being honored for a match he won a month and half earlier at Scottrade Center in downtown St. Louis during the 2012 NCAA championships. He defeated Lehigh’s Zach Rey 4-1 in the finals to win his first NCAA title as a redshirt sophomore.

“Every once in a while you kind of get that feeling like ‘Yeah I did it,’” Nelson said. “It’s still a cool feeling.

“Going into the NCAA’s I knew I could win it,” he said. “In my head my main focus was I was going to win it, and I wasn’t going to let anyone stop me.”

Minnesota finished second as a team in the championships behind Penn State.

The victory against Rey was the 25th in a row for Nelson, who went 32-2 overall. He won a Big Ten individual title at heavyweight and dominated the Big Ten dual season with an 8-0 record. The 25-match win streak came after back-to-back losses to opponents from Central Michigan and Oklahoma State in December.

“That weekend I kind of wasn’t mentally there,” Nelson said. “I had doubts in my mind when I went out on the mat and thought ‘what if I lose to this guy.’ I had those thoughts in the back of my head that you can’t have.”

After that weekend, Nelson said he told himself he wouldn’t let it happen again.

“Every match after that, I had the idea in my head that I was going to win and never had any doubts,” he said.

“Like anybody that’s been through the national tournament, I think the next year, with kind of knowing what to expect, that experience helped him,” head assistant coach Brandon Eggum said. “He was confident in himself — you could tell. He believed that he was the best heavyweight in the country, and he went out and proved it.”

Eggum said the improvement from last year to this year was all about Nelson’s confidence.

Teammate Zach Sanders said he did not see many physical changes in Nelson between his first year in the lineup and his second but thinks that his technical changes made the difference.

Nelson is not the biggest heavyweight, although he put on 10 pounds from his redshirt freshman season to his sophomore season. Eggum said his strength and height give him an advantage and make him “difficult to wrestle.”

Nelson is a mechanical engineering major at Minnesota, and Sanders says his work ethic shows off the mat as well.

“He’s an engineering major, so his time management needs to be spot on,” Sanders said. “It’s pretty impressive what he’s done so far in his couple years here, and he’s still got more time.”

Sanders said that Nelson’s work ethic in practice was “fanatically hard” and that he was an easy-going guy off the mat.

“Just like most heavyweights, he’s pretty easy going, like a teddy bear as one would say,” Sanders said. “Except he’s not a soft teddy bear — he’s rock hard with muscle.”

Coming out of Cambridge, Nelson said he was recruited by Wisconsin and Minnesota, but deciding where to wrestle wasn’t difficult.

“[Minnesota] is kind of somewhere I always wanted to be,” Nelson said. “It’s a great program to be a part of with the heavyweight tradition that they have, and that’s kind of really what brought me here.”

It makes for a better story, too.

“He grew up wanting to be a Gopher and win a national title here,” Eggum said. “It’s pretty cool to see a guy like him, a local guy, come through and win a title.”