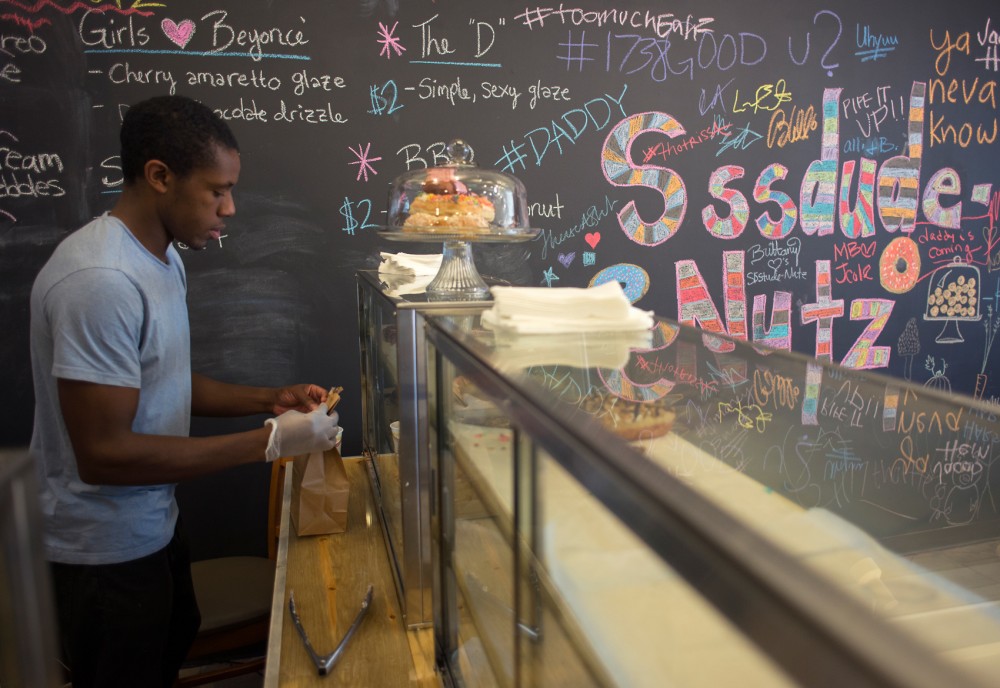 Owner of Sssdude-Nutz Bradley Taylor packs up a bag of doughnuts for a customer on Sunday morning at the Sssdude-Nutz's storefront in Dinkytown. Taylor and his fiance and co-owner of the shop, Ashley Peterson, opened the storefront last week.

Jackie Renzetti
For weeks, Ashley Peterson and Bradley Taylor labored until 2 a.m., scraping concrete off the floor and painting walls, preparing to open Dinkytown’s newest shop.
The recent University of Minnesota graduates and owners of Sssdude-Nutz held weekly doughnut pop-up shops for about six months in various Dinkytown stores. In August, the two signed a lease on a brick-and-mortar location, between Kitty Cat Klub and the Refinery, which opened on Sept. 8.
The locations of the commitment-free shops included Underground Printing, Alpha Print and Copy, and Varsity Bike and Transit.
“It was amazing how many people they would get,” Varsity Bike and Transit owner Rob DeHoff said of the pop-up shops. “Sometimes the line would go out the door.”
Taylor, a 2014 sociology graduate, said he often received questions about the pronunciation of “Sssdude,” and he thinks the debates helped get the word out about his shop.
With the goal of opening a permanent store, the pair ran weekly doughnut stands, which they said taught them about adaptability and efficiency without great risk.
By hosting shops almost weekly, the two developed rapport with customers and Dinkytown owners.
“I’d say the community really helped us be who we are,” said Peterson, a 2015 business and marketing education graduate. “All of these people kind of lifted us up and were really supportive, and that helped so much.”
While they were learning the ropes, the team scouted for a permanent pastry place.
“People didn’t take me seriously at first,” Taylor said. “It took a lot of convincing.”
After finding their current location, the pair reached out to the landlord Steve Young, who gave them a chance after observing their baking process and pop-up shop, they said.
“If you’ve met them, you’ll realize they’re a young, energetic couple with a lot of persistence and a lot of creative ideas, and that’s part of what it takes to succeed,” Young said. “I think it’s important to give people a chance to open a small business.”
Currently, Sssdude-Nutz employees bake doughnuts in the kitchen of Southeast Como’s Potter’s Pasties and Pies.
In the early days of Taylor’s venture, he said he sought mentorship from Potter’s owner Alec Duncan, who allowed him space in his kitchen in exchange for volunteer work.
The pair also worked with Co-Lab, a student organization that helps support and incubate new businesses.
Co-Lab president Tyler Ebert said the organization primarily helped with the financial and legal aspects of running a business, and the group plans to continue supporting the shop.
“The fact that he’s able to come in straight out of school and is able to build this stuff and has gotten all the attention that he has is very extraordinary,” said Ebert, adding that he thinks Taylor’s motivation and authenticity have contributed to his success.
Sssdude-Nutz may have also benefitted from a stronger-than-before camaraderie among Dinkytown owners. DeHoff said he thinks owners are more collaborative in response to issues like new apartments and the debate surrounding Dinkytown’s historic designation.
DeHoff said the business may also bring new customers to Dinkytown.
“I think anything that helps add vitality to Dinkytown helps Dinkytown in general,” DeHoff said.
Taylor and Peterson, who decorated their shop’s walls with historic photos of Dinkytown, said they hope to become a permanent part of the community.
“I’m really most excited about becoming a staple in Dinkytown,” Taylor said.
The pair hired a small staff of mostly University students. They said they plan to work with students in the future and recently reached out to a former University student to paint a mural in their shop.
“We both went to the ‘U,’ and we really want to support other entrepreneurs,” Peterson said. “There’s so many students here and so much talent that we for sure want to tap into and help those people out.”
Delete Image
Align Left
Align Center
Align Right
Align Left
Align Center
Delete Heading