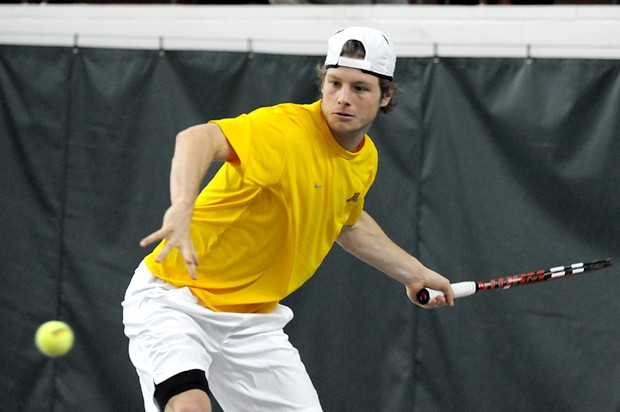 The GophersâÄô menâÄôs tennis team is escaping MarchâÄôs final bite of winter by traveling to the warmer regions of the country over break. The weather should be better, but could also take the Gophers by surprise. No. 27 Minnesota (10-2) has played every match indoors this winter. Nine of their 12 matches have been within the friendly confines of the Baseline Tennis Center, and the rest have been under a roof as well. This weekend, however, the Gophers will have to battle natureâÄôs conditions against San Diego State and the University of Nevada-Las Vegas. Both teams have competed outdoors this season âÄî something Minnesota tennis players never do this time of the year. Head coach Geoff YoungâÄôs players will have to adjust to the sun, the wind, the shade and whatever else comes their way. They will also have to prove themselves on the road. The Gophers have lost two of only three away matches so far this season. âÄúWeâÄôll just have to adjust by being tough mentally, being patient, and waiting for the right ball,âÄù Young said. The men have put their most recent loss behind them, a 5-2 loss to Washington on the road. But sophomore Tobias Wernet , who simply described it as a bad day, knows there cannot be the same mistakes this time around. Everyone will have to come out strong with a great attitude. âÄúIf two or three guys on the team have a bad day, itâÄôs hard to win against a team that is ranked 22 in the country,âÄù Wernet said. Minnesota returns the next weekend at Baseline to open the Big Ten season. The Gophers will host one of the Big TenâÄôs best in Michigan next Friday and Michigan State on Saturday. Minnesota lost to the Wolverines last year , but Wernet is sure if the play is just as good as last, his team should be able to pull out a victory. âÄúIf we bring the same performance with a team we have this year, weâÄôre going to win for sure,âÄù Wernet said. After their first Big Ten loss of the season two weeks ago at Iowa, GophersâÄô womenâÄôs tennis is attempting to rebound âÄî on the opposite side of the country that is. Minnesota will go head-to-head with Coastal Carolina and Charleston next week. The following weekend, the women also compete with more Big Ten opponents in Michigan and Michigan State, both of which are away meets. Coach Tyler Thomson knows his team has some opportunities as they take the road for a week, some that could have positive effects later in the season. One is to start moving in the direction of being an NCAA caliber team. Thomson knows his team has that in them. âÄúWeâÄôve got a clear road ahead of us of, opportunity and what needs to be done to take that opportunity,âÄù Thomson said.