Gophers must keep emotions in check 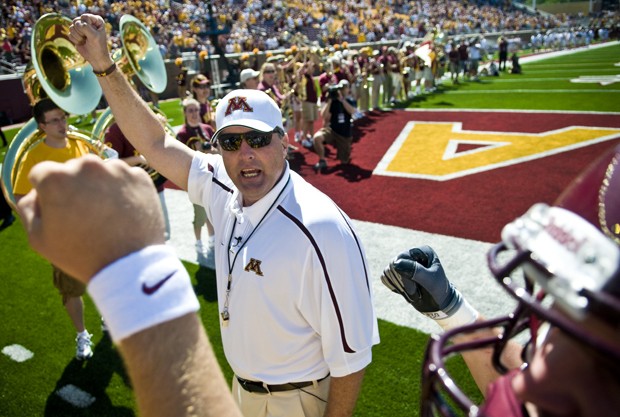 Welcome home. Or, in Gophers football coach Tim BrewsterâÄôs words, welcome to âÄúthe dream.âÄù Indeed, most of Saturday is bound to feel a bit surreal. When reality sets in âÄî for both fans and players âÄî remains to be seen. But the reality now is this: a new chapter in Minnesota football history will open Saturday night when the Gophers (1-0 overall, 0-0 Big Ten) take the field against Air Force (1-0 overall, 0-0 Mountain West) at 6 p.m. for the inaugural game at TCF Bank Stadium . For the first time since Memorial Stadium closed in 1981 , football at Minnesota will be played outdoors and on campus. The christening of the newest college football stadium in the country will be rife with ceremony. More than 400 former Gophers football players will be in attendance, nine of whom will be honorary captains . Minnesota will make its first victory walk to TCF Bank Stadium down University Avenue. Lest anyone forget, however, the Gophers know thereâÄôs a still a football game to be played amid the hype over the new stadium. âÄú[The stadium] is a huge story line, but we as a football team, as a staff, our focus has got to be on Air Force,âÄù said Brewster, who is in his third year as head coach. âÄúIt canâÄôt be about the opening of TCF Bank Stadium.âÄù Easier said than done, and perhaps the best Brewster can hope for is a balancing act. Amid the spectacle, emotions are sure to run high, which, if properly channeled, could provide Minnesota a significant lift. ItâÄôs over-enthusiasm the Gophers will have to guard against, and nothing can ruin the debut of âÄúThe BankâÄù quite like a loss. âÄúThat first kickoff will be like the Super Bowl to us,âÄù junior quarterback Adam Weber said. âÄúBut once the first hit happens it still is a football game.âÄù And the Falcons will present some unique challenges. A week ago, they drubbed Nicholls State 72-0 in the most lopsided win in school history. Though Nicholls State is a Football Championship Series (formerly Division I-AA) team, Brewster praised the feat regardless of the opponent. âÄúI donâÄôt care who youâÄôre playing, you score 72 points, thatâÄôs a heck of a day,âÄù he said. Air ForceâÄôs run-happy triple option offense gained 474 rushing yards on 68 attempts, a mind boggling seven yards per carry. Being from a conference dominated by the spread offense, MinnesotaâÄôs defense could have trouble with the FalconsâÄô triple option as well, if it is unable to stay disciplined. âÄúOnce something like that gets ticking itâÄôs pretty hard to stop,âÄù senior linebacker Simoni Lawrence said. Lawrence played junior college football at Valley Forge Military Academy , which also ran the triple option. To keep Air ForceâÄôs offense from ticking, the Gophers will need to find their own offensive groove. After posting a quick 14 points in the first quarter last week against Syracuse, Minnesota struggled to move the ball and failed to find the end zone again. The offense did little until a 79-yard drive late in the fourth quarter that led to a game-tying field goal from junior kicker Eric Ellestad, who was playing in his first collegiate game. If the Gophers follow a similar arc against the Falcons, theyâÄôre in trouble; and they know it. âÄúAs an offense, we have to do a better job of staying on the field and moving the ball and not having any three-and-outs,âÄù said Weber, who was erratic against the Orange before going 7 for 11 on MinnesotaâÄôs late drive . âÄúBecause if we give Air Force the ball, obviously theyâÄôve proven they can really do something with it.âÄù