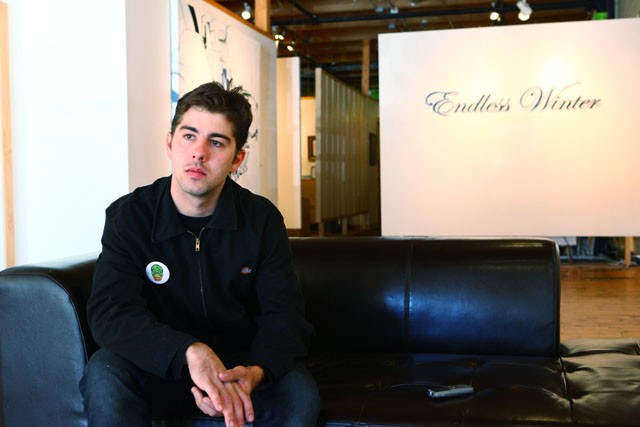 When: Now through November 19

Early American advertising was a draughtsmanâÄôs art. The massive printing of the screened graphics reflected this notion of commodity. However, these technical drawings were still the manual result of an individual effort. There is a conflict between this personal method of construction with the ultimately capital purpose of selling things. Minneapolis-based artist Drew Peterson attempts to play with such dichotomies in his âÄúEndless WinterâÄù exhibition.

PetersonâÄôs work, which rises through both painting and screen-printing, is largely based around the geometry of early American advertisement aesthetics. While PetersonâÄôs work rarely manifests itself in a figurative product, the dark line patterns and gentle chrome curves make his inspiration blatantly identifiable.

âÄúI like the draftsmanship of these ads,âÄù Peterson said. âÄúThese were created by someone drawing them out with their own hand.âÄù

Perhaps one of the most fascinating points of PetersonâÄôs work is the vantage point from which he selects and views his collection of advertisements, a personal archive comprised of more than 1,000 pieces. His vision functions as a retrospective on what the future promised a century ago.

âÄúThese images represent objects that have developed a sort of comfort and lifestyle, and they are the first generation of this comfort,âÄù Peterson said, âÄúWe have them as commonplace.âÄù

His method of approach allows for a unique resonance within his visual analysis of dated shape and form. While it is often of artistic fashion to scoff at the socio-political implications of commodity, Peterson is embracing if not celebrating the nostalgic excitement behind a new idea.

âÄúWhen I use them, I try to use them to create emotive energy or a sense of exuberance,âÄù he said.

The exhibitionâÄôs screen-print serial, which complements PetersonâÄôs larger canvas works, does however appropriately balance that exuberance with a stark utilitarian reemphasis of the commodity role inherit within his sources.

âÄúThe graphic quality of the images I use lend themselves very well to the [screen print] aesthetic,âÄù he said, âÄúIâÄôm looking for certain line quality and shape.âÄù

Even in the simplest black-and-white moments of an exhibit that does utilize a substantially monochromatic color palate, the pieces still seem to be bursting at the seams. PetersonâÄôs playfulness with geometric juxtaposition allows the works to be cacophonic, but still somewhat identifiable.

âÄúIn the past, IâÄôve put together bodies of work where the color becomes too all âÄòover the place,âÄôâÄù he said. âÄúThis was just a way for me to be more intentional with how I was using color.âÄù

The subdued color ultimately does elevate the impact of PetersonâÄôs work. His craft is more contingent on shade than tone. After all, there is a great fondness for the source and the authenticity of his approach. While Peterson maintains that his work is not deliberately intended to appear futuristic, there is still a very sincere excitement for innovation within his work.