No. 1 recruit Jones commits to Gophers 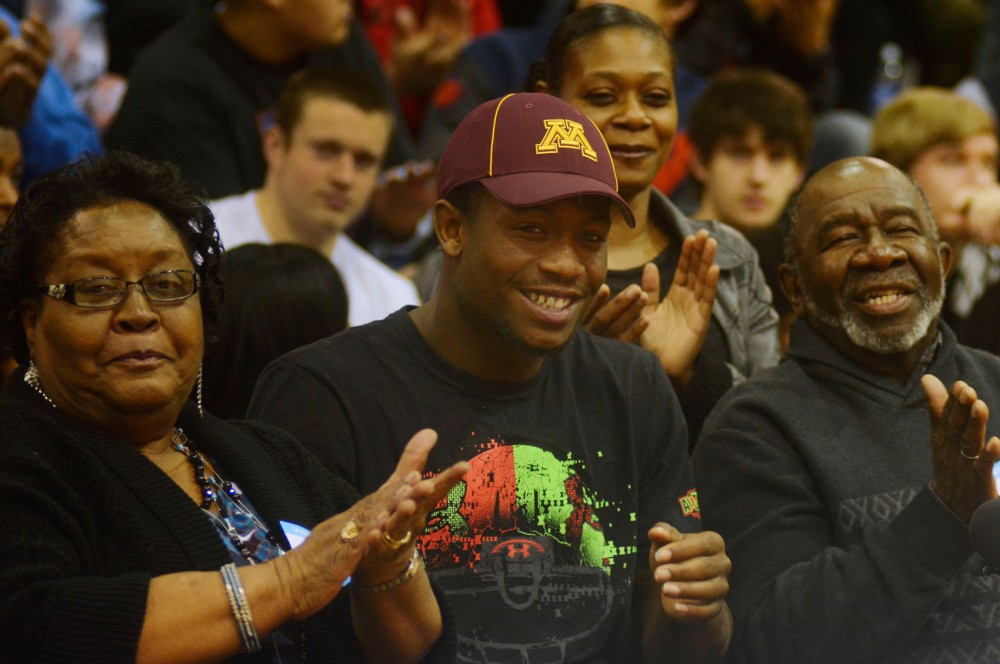 Jeff Jones, the No. 1 high school football player in the state of Minnesota, announced his commitment to the Gophers on Wednesday morning at Washburn High School.

“I knew Minnesota was the right choice for me,” he said. “They run the ball, and with Kill’s staff, you look at their track record, they win games.”

The four-star running back is by far Minnesota’s splashiest recruit this year, ranked 44th in the nation according to Rivals.com.

Jones gave a soft commitment last February, indicating his intention to play for the Gophers. But as more teams expressed interest in the explosive running back, he reopened his recruitment.

Minnesota head coach Jerry Kill said he wasn’t overly confident Jones would stick with the Gophers but knew Jones wanted to play in his home state from the beginning.

“I thought we built a good enough relationship [for him to stay],” Kill said.

The head coach was right.

While Jones was courted by many of the nation’s top programs, including Michigan, Florida, Missouri and Michigan State, he stayed home.

Jones planned official visits to Michigan and Florida last month but canceled them.

“As a Minnesota kid that’s from here, growing up here, I wouldn’t feel right going to Michigan — putting up stats with Michigan across my chest rather than Minnesota,” Jones said.

Jones called the recruiting process a roller coaster filled with ups and downs, but he’s ready to move forward after
assessing all his options.

“I want to apologize to the state of Minnesota, the University of Minnesota and my grandparents for taking so long,” Jones said, donning a Gophers hat.

The last major football recruit to come out of Washburn High School was Ra’Shede Hageman. The 6-foot-6-inch defensive tackle thrived with the Gophers and is now preparing for the 2014 NFL Draft.

Hageman said he has become a mentor to Jones and was happy to hear about his commitment to the Gophers.

“I definitely took him under my wing a while ago,” Hageman said.

Jones said watching Hageman play at Washburn High School and then with Minnesota gave him hope that he could someday do the same.

Now, he has. It’s a trend that both Hageman and Jones hope continues.

“In order to be a successful football team, we need those top state players to stay home and represent Minnesota,” Hageman said. “The fact that I stayed home and Jeff Jones is staying home, that’s kind of a trend that we’re trying to set. This is the start of something good.”

Tucker agreed with Hageman and said he thinks Minnesota will be able to keep the state’s top talent in-state going forward.

“Now other people begin to look at the University of Minnesota as a high-level football program,” Tucker said.

Jones should be a great fit for the Gophers’ run-heavy offense.

Minnesota was second in the Big Ten last year in rushing attempts, so Jones will have plenty of chances to carry the ball down the road.

Jones said he intends to play next season, but the Gophers’ running back corps is crowded, to say the least.

Minnesota’s leading rusher last season, David Cobb, is back for his senior year after becoming the program’s first 1,000-yard rusher since 2006.

Donnell Kirkwood and Rodrick Williams will also be back. And on top of that, Berkley Edwards should play next season after redshirting in 2013.

Kill said he doesn’t mind bringing more competition to his team and went as far as saying the Gophers won’t be able to win without it.

The good news for Minnesota is Kill expects this recruiting class to compete for playing time from the get-go.

“[They] will definitely bring some competition to the party,” Kill said. “We want that. We need to have it.”