The Gophers swept Michigan at home in the quarterfinals last weekend. 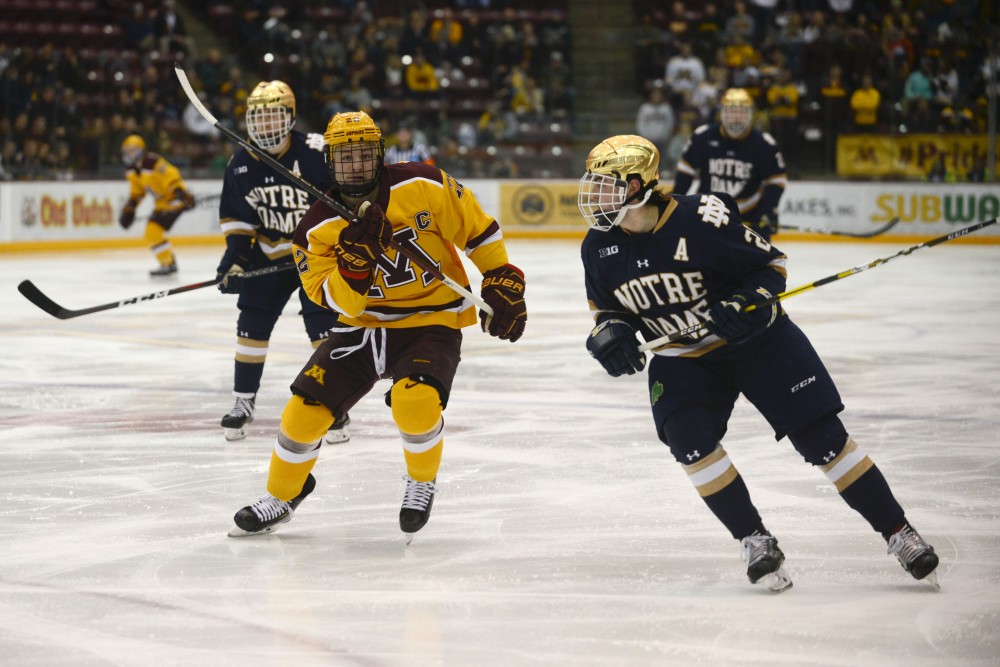 The Gophers hit their peak when they needed it most. They’ve won five straight and seven of their last eight games after sweeping Michigan in the first round of the Big Ten Tournament.

The team has been under stress since late in the regular season. Without winning the Big Ten Tournament, there is little chance of them making the NCAA Tournament. But Minnesota head coach Bob Motzko said the players were only focused on what’s certain: Saturday’s game at Notre Dame.

“I’m not going to hide the fact that we got a pretty good feel about us,” Motzko said. “I don’t think they’ve taken it one ounce further than … they want to get to win number 19. We’re in a good spot.”

The Gophers (18-15-4) are 3-1 in the regular season against the No. 16 Fighting Irish (20-13-3), and swept them in their first weekend series at Notre Dame’s Compton Family Ice Arena, where the semifinal will be played Saturday. Minnesota was out-shot in that weekend series 78-48, but won the series by a combined score of 7-2, capped by Gophers freshman forward Blake McLaughlin’s game-winner in the final eight seconds of the third period.

“I remember Blake scoring with [eight] seconds left, and the building kind of dying, which was kind of nice. I like a silent away building,” said Gophers goaltender Mat Robson, who started those first two games. “It’s a great place to play, and I’m looking forward to getting back there. Obviously, some experience there, some success as well, and we’re just going to look to continue that with this one-game weekend.”

On Tuesday, Robson was named one of three finalists for the Big Ten Goaltender of the Year award for his play in the crease this season. Robson, a junior from Mississauga, Ontario, became eligible to play for the Gophers in the middle of the 2017-18 season. He’s recorded a .920 save percentage, with 915 saves on 30 starts this season. Motzko is up for Big Ten Coach of the Year, and Gophers Sammy Walker is up for Big Ten Freshman of the Year.

Robson will have some trouble lined up across the ice from him as Fighting Irish goaltender Cale Morris recorded two shutouts on 55 total shots last weekend in Notre Dame’s quarterfinal series against Michigan State. Morris was also named as a finalist for Big Ten Goaltender of the Year.

“We just need one [goal] to win, so I guess that’s how it’s going to go this weekend,” Robson said.

Gophers two-year captain Tyler Sheehy faces what could be his final game with the team if they don’t continue to the Big Ten Championship. Sheehy had three points last weekend, and is second on the team with 41 points overall this season. He suffered an injury and saw his production drop to 25 points last season after a 53-point sophomore season, but has recovered since.