At least once a year, security staff review liquor laws and tips. 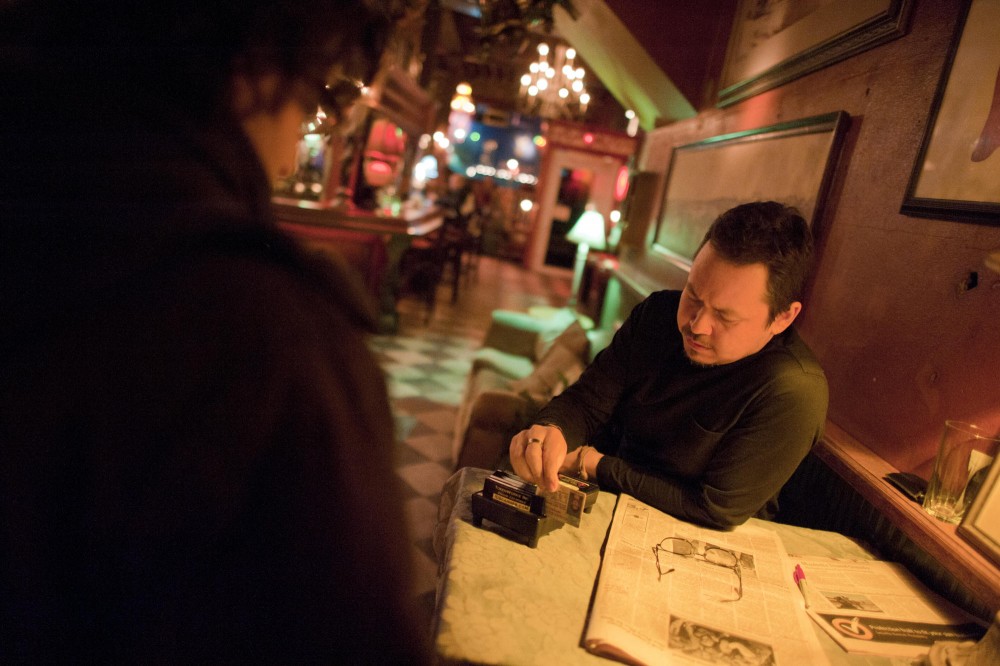 Greta Huff was trying to go to a bar to celebrate her friendâÄôs 21st birthday when she was faced with the cold, hard truth that she wasnâÄôt of-age herself.

The bouncer at Blarney Pub and Grill took her fake ID.

âÄúThey told me it was horrible,âÄù Huff said, holding up an Ohio license with her picture on it. âÄúBut I think it looks pretty good.âÄù

Huff, 19, said she bought the ID on the Internet for $30 and would use it to get into bars in Madison, where she attends the University of Wisconsin.

The security staff at Blarney gave Huff the ID back, but she said she wouldnâÄôt be using it again that night.

âÄúWeâÄôre just going to try to go to a different party,âÄù she said as her friends slowly trickled out of the bar.

The first weekend into spring semester saw most of the Dinkytown bars with a steady stream of patrons.

At the Library Bar and Grill, a tall, burly man checked IDs as the line wrapped out and around the side of the building.

âÄúIâÄôve never seen one of these before,âÄù he said to a customer before winking and waving him through.

At the Kitty Cat Klub, Clint Mahkimetas, the âÄúdoor guy,âÄù sat at a podium swiping cards as music blared and people danced behind him.

Mahkimetas, 39, has been working at the Kitty Cat Klub for more than six years. He said people have the wrong idea of bar security staff.

He said his job isnâÄôt to intimidate customers.

âÄúIâÄôm the first line of defense, but IâÄôm also the face of the place,âÄù Mahkimetas said. âÄúI take a lot of pride that I set up an area to make people feel a part of something special.âÄù

More goes into the job than standing at the door and checking identification. Many bars have staff members complete alcohol service training at least once a year.

Training is conducted on-site and mainly consists of teaching staff to recognize fake IDs and customers who are too drunk to be served.

Ben Gisselman of Alcohol Liability Education Training said he discusses specific laws, like the dram shop law, which holds bars accountable when customers who drink too much get in an accident or cause other damage.

The staff is taught how to recognize valid identification. The staff also learns the signs of someone who is âÄúoverly intoxicated,âÄù including slowed or slurred speech, trouble standing or walking and poor coordination.

The training can last anywhere from one to three hours and runs bar owners hundreds of dollars on top of paying employees for attending.

But to bars, the cost is worth it for liability reasons.

Greg Pillsbury, owner of Burrito Loco Bar and Grill in Dinkytown, said the $600 a session is expensive, âÄúbut itâÄôs worth it.âÄù

The training isnâÄôt required by the city of Minneapolis in order to hold a liquor license. But Pillsbury said his insurance company requires the training at least once a year to qualify for liability insurance.

Not all insurance companies require the training, but Gisselman, who has been holding training sessions since 2002, said it might depend on where the bar is located.

âÄúI have a feeling that [insurance companies] are more apt to require it in neighborhoods like [Dinkytown],âÄù Gisselman said, âÄúbecause they know heâÄôs going to encounter people who have had too much to drink because of the campus environment.âÄù

Gisselman said, for the same reason, he will adjust his training depending on the area.

Mahkimetas said that while he learned a lot simply by doing his job, the training gave him the language he needs when trying to calm a disgruntled customer.

He said heâÄôs never had to physically force a customer out âÄî âÄúI have been 100 percent successful in talking people out that door,âÄù he said.

âÄúWe had people bringing in IDs from Canada,âÄù Pillsbury said. So the bouncer would write the Canadian prime ministerâÄôs name on his arm and quiz guests on it.

Mahkimetas said he thinks people think all security staff members are big, burly men who want to start a fight.

âÄúI think thereâÄôs a big difference between what people think my job is and what it really is,âÄù Mahkimetas said. âÄúA majority of people think the age of 21 is the only reason IâÄôm here.âÄù

Mahkimetas said he has less trouble with fake IDs than he does with people who donâÄôt understand the rules about valid identification. HeâÄôs turned away many people who will argue that because theyâÄôre over 21 it doesnâÄôt matter.