Vogue documentary "The September Issue" shows another side of Anna. 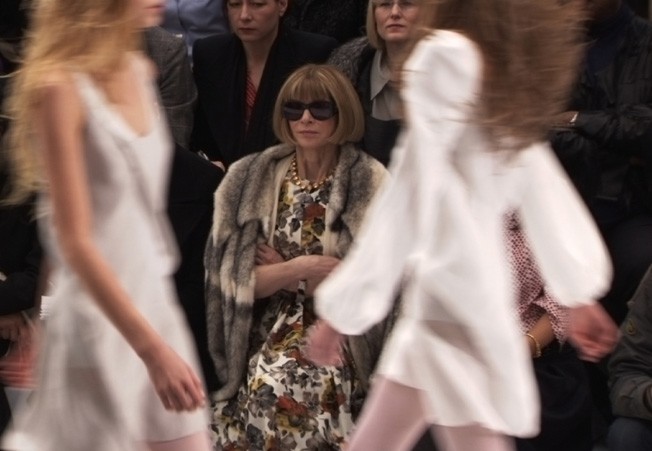 âÄúThe September IssueâÄù STARRING: Anna Wintour, Grace Coddington DIRECTED BY: R.J. Cutler PLAYING AT: Landmark Edina Cinema, 3911 50th St. W., Edina To the outsiderâÄôs eye, the fashion business seems a shallow one, but Vogue editor-in-chief Anna Wintour will prove you wrong, and not necessarily in the most polite manner. She staunchly defends her line of work in R.J. CutlerâÄôs documentary, âÄúThe September Issue,âÄù saying: âÄúJust because you like to put on a beautiful Carolina Herrera dress or a pair of J. Brand jeans, doesnâÄôt mean youâÄôre dumb.âÄù And dumb Wintour is not. Though sheâÄôs often portrayed in the media as a beastly sort (the British press dubbed her âÄúNuclear WintourâÄù when she worked at British Vogue) she is also an editor of the highest caliber. She knows what works and what doesnâÄôt, and sheâÄôs not afraid to flatly issue commands in a chilled-over-ice British clip. Vogue is not only a magazine; itâÄôs a lifestyle, a marketing tool, and a brand in itself. Director Cutler understood this and decided to give Wintour and her crew the same treatment he gave the Clinton administration: An intensive inquiry via camera and documentary, following them for six months as they prepared for what became the filmâÄôs title, âÄúThe September Issue.âÄù In the fashion magazine industry, the September issue is the biggest of the big, literally. Thirteen million women receive the issue per year. 2007âÄôs issue, featuring actress Sienna Miller on its cover, weighed in at a whopping 840 pages. ThatâÄôs in sharp contrast to today, where the page count barely scraped 500. Though the film centers around the stressful world of magazine production, itâÄôs Anna who the audience cares to watch. With no actual training to work in the magazine industry; she was the daughter of a Brit newspaper tycoon and fell into publishing by hard work and sheer talent. Since sheâÄôs joined, her body of work there has been nothing short of awe-inspiring. Wintour as boss is best seen in her relationship with super stylist Grace Coddington, a former model and colleague at Brit Vogue. Whereas Anna favors sharp, clean editorials, GraceâÄôs gorgeous spreads tend towards the fantastical. And though the two butt heads over the pages of work that get cut (Wintour vetoes $50,000 of photography from one of CoddingtonâÄôs pieces), theyâÄôve got the perfect dynamic, like yin and yang. Even though âÄúThe September IssueâÄù is a fashion film of the highest order, definitely on par with âÄúValentino: the Last Emperor,âÄù itâÄôs not exclusive to a fashion-forward audience. The issues at stake are issues everyone faces: budget woes, work tension, awkward moments between bosses and underlings, just on a much grander, more glittery scale. The film is funny, too. Not only can Wintour be dryly humorous, cracking jokes about high fashionâÄôs tendency to run a bit ridiculous. âÄúItâÄôs a neck brace!âÄù she kids of a questionable item from Balenciaga. Best of all is AnnaâÄôs right hand man, the larger than life (heâÄôs huge!) AndrÃ© Leon Talley, editor-at-large for the magazine. The towering giant of fashion enthusiasm is served in perfect small doses throughout the film, booming at Vera Wang about a âÄúfamine of beauty! ThereâÄôs no beauty in my eyes!âÄù or arriving at a tennis lesson in full Louis Vuitton regalia, down to his tennis racket carrier. Even though Anna might hint at a cameraman to lose a few pounds, or trump dreams with a flick of her wrist, Cutler and co. film her in a sympathetic light, making her adventures and trials inward-looking enough to inspire empathy. At a concise 90 minutes, the film manages to capture a fully-realized portrait of what goes on behind the scenes at the worldâÄôs most legendary fashion magazine.