Lavvu Coffee House, slated to open next week, will be North America’s only Sami-inspired coffee shop. 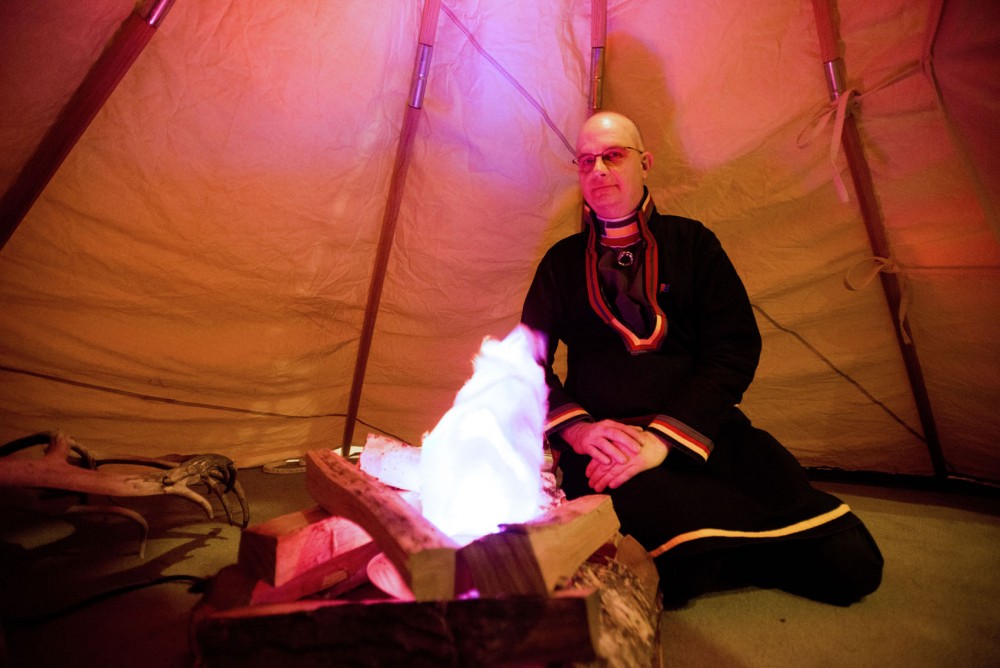 Lavvu Coffee House owner Chris Pesklo sits in a Scandinavian Sami lavvu tent at the Swedish Institute on Friday, Jan. 25, 2013, in Minneapolis. Plesko said visitors to the new coffee house will be able to "enjoy a latte in a lavvu."

There’s no shortage of coffee shops on the University of Minnesota campus, but none of them let customers drink coffee under an 8-foot-tall tent — yet.

Inspired by the Sami people — a nomadic culture of Northern Finland, Norway, Sweden and Russia — Lavvu is expected to open its new location Feb. 4.

Chris Pesklo, University alumnus and owner, said he’s had his eye on the Dinkytown location for some time now.

“I’ve lived in Dinkytown for over 25 years,” Pesklo said. “I know the environment of Dinkytown and the student lifestyle. When I saw this store open, I knew it was a once-in-a-lifetime opportunity.”

Sami culture is also being featured at the American Swedish Institute in Minneapolis. The exhibits opened last Saturday.

On display will be some of Pesklo’s own lavvus, the 8-foot tents the indigenous people use when traveling, Pesklo said. He said the lavvu is a “very strong symbol for the Sami.”

Pesklo said they often held superstitions about its brewing, used certain special spices in it and read its grounds for fortunes.

While the store will sell these “secret Sami spices,”  manager Jessica Carney said she hopes to introduce Sami drinks to the menu soon.

The store, which Carney said has been in the works for a year, is actually the second location Lavvu has had. It closed its Northtown Mall location in October in anticipation of its new opening.

“I’m so excited,” Carney said. “I’ve been dreaming about getting back in there.”

Pesklo hasn’t always been so well-versed in Sami culture.

He was raised Norwegian Jewish, but discovered that was a story created by his grandparents to hide the Sami roots they were ashamed of.

“It was better to be Jewish in the Norwegian eyes than to be a Sami,” he said.

The Sami have a long, strenuous relationship with Scandinavian governments, according to Matti Jutila, visiting political science professor.

Until the 1970s, he said, the government took steps to assimilate and disenfranchise the indigenous people.

Since then, though, the Sami have gained support.

“Now the tide has kind of turned,” Jutila said. “There has been an ideological change from assimilation to supporting farmer culture.”

“Since then it’s been a complete odyssey of discovering this culture that I have,” he said.

The Twin Cities area is one of a few major Sami hubs in North America, Pesklo said.

According to Jutila, the Sami presence in Minnesota relies on Nordic immigration to this region for economic and climactic reasons.

The community makes up for small numbers with their active involvement, Pesklo said.

On Feb. 6, they will celebrate Sami National Day.

“Because the Sami are spread out across four countries,” he said. “It’s the one event that brings us all together.”

Another local Sami and former University student, artist Kurt Seaberg said the Sami culture as a whole is very connected.

“We’re kind of like a cultural exchange group,” he said.

Seaberg’s work, as well as Sami family memorabilia he’s inherited, is being featured in both of the American Swedish Institute’s exhibits.

He also noted that the Sami are very invested in supporting other indigenous groups worldwide.

“The Sami themselves are very active in the worldwide indigenous movement,” he said. “They share a common history … so it’s just a natural fit and feeling of solidarity.”

Pesklo said he hopes to extend this sort of support by using the Lavvu Coffee House as a meeting place for Minneapolis indigenous groups as well as Sami.

“We’re providing a platform for the Sami community to do events,” he said.

Pesklo also plans to hold “indigenous” and “stateless persons” nights where other local indigenous groups can gather and perform music.

And while original Sami migrators, like Pesklo’s grandparents, felt ashamed of their history of oppression, Seaberg said that attitude has changed.

Now, he said, Sami-Americans are excited to discover their culture’s rich traditions.