Ruben Fleischer’s second feature is a disappointing shift towards mediocrity. 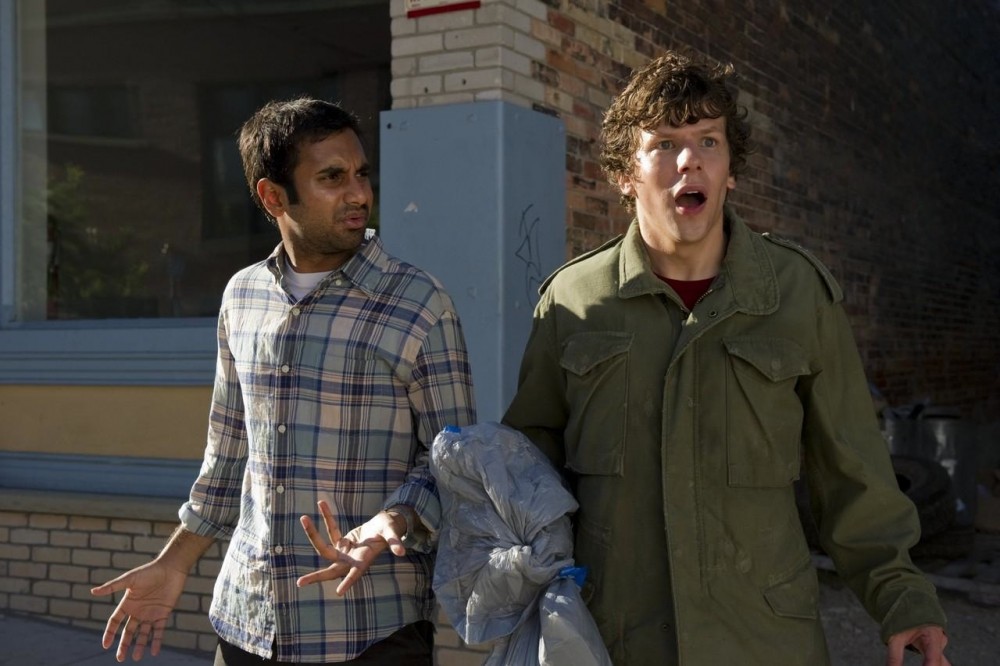 Take note of that bewildered face on Aziz Ansari. You'll be wearing it twenty minutes into the viewing.

In the brief 83 minutes of Ruben FleischerâÄòs second feature film, âÄú30 Minutes or Less,âÄù the director manages to wash away the up-and-comer notoriety that he established with 2009âÄôs stylized gore fest, âÄúZombieland.âÄù That post-apocalyptic yarn may have seemed like a throwaway contribution to a revived stream of undead culture, but it was actually full of bright, brave action scenes, effortless punch lines and, dare I say, heart.

FleischerâÄôs past sensibilities have apparently been checked at the door in his current attempt at a slacker heist story. WhatâÄôs all the more disheartening is the acting talent he manages to drag down with him on screen.

âÄúZombielandâÄù actor Jesse Eisenberg stars as Nick, the storyâÄôs central underachiever. His life duties ebb from videogames to joint-fueled pizza delivery shifts and back to videogames. This well-established groove of laziness is undone when two wannabe criminals, played by Danny McBride and Nick Swardson with their expected levels of bumbling stupidity, force him to rob a bank by strapping a bomb to his chest.

The premise is far-fetched but cinematically believable. Fleischer showed his ability to resuscitate worn-out filmic tropes with âÄúZombieland,âÄù a story that was told throughout a wealth of b-movies. The narrative shell for âÄú30 Minutes or LessâÄù had the potential to be a doozy of a youthful heist film. The actual product, however, is unbearably mediocre.

The film is full of the now-commonplace brand of absurdist conversational comedy. Aziz Ansari plays EisenbergâÄôs straight-arrow cohort Chet, and he undeniably has a certain rapport with his buddy, but the comedic drivel that spews from their mouths never cultivates more than a chuckle.

Then thereâÄôs the spattering of homophobic and racially driven shtick of McBride and Swardson, two comedians who have built a repertoire out of this thread of hick-ish persona. While the two may fit the bill for these roles, their lazy lines only shine a greater light on the unsurprising casting choices. Writer Michael Diliberti takes the low road with a never-needed blend of gay jokes and âÄúSlumdog MillionaireâÄù one-liners.

Some of this comedic half-assery could have been rectified with FleisherâÄôs imaginative camerawork like the kind found in every scene of âÄúZombieland.âÄù But Fleischer must have seen no need for any visually exciting or surprising moments. ItâÄôs something that turns this sugar-free bank robbery tale into a mass of wholly apparent plot holes.

It takes about fifteen minutes of screen time for Ansari and Eisenberg to prepare for the filmâÄôs central heist. It then takes them about the same length of time to actually rob the bank and outrun the police. The plot is so undercooked and unbelievable that the filmâÄôs final act flounders through similarly uninteresting loose ends. The most surprising part about the filmâÄôs conclusion is that law enforcement is never seen or discussed again.

It seems like Eisenberg followed Fleischer into the dark on this one, and itâÄôs understandable as to why he did. âÄúZombielandâÄù was a big-idea blast, and âÄú30 Minutes or LessâÄù looked to be the same way on paper. Even with Eisenberg and Ansari diligently trying to mine comedic nuggets from the script, the source seems to be exhausted.

1 and a half out of four