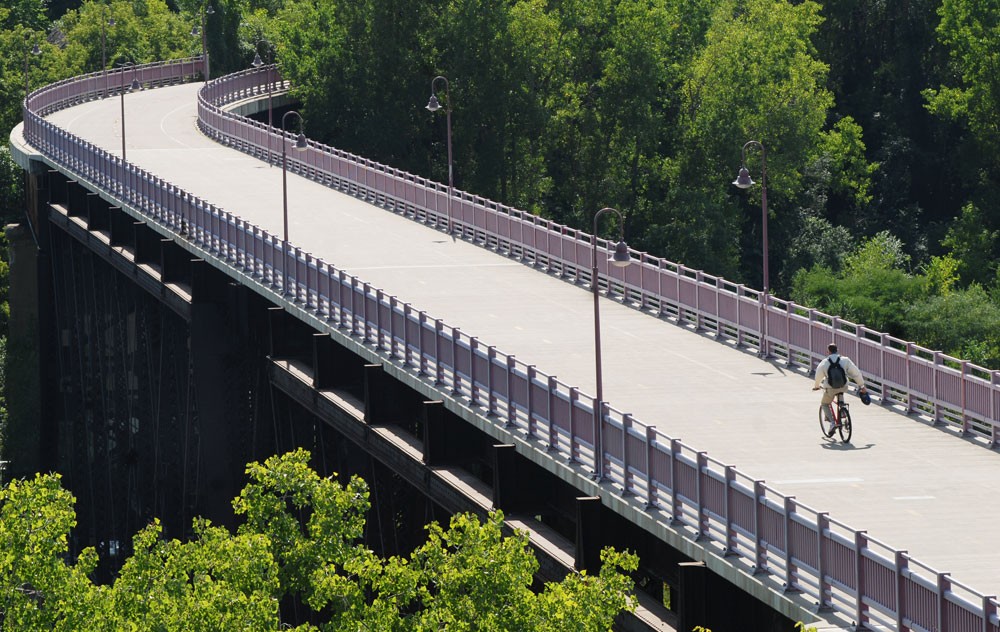 A bicyclist cruises down Bridge 9 on Monday in Minneapolis. Mayor R.T. Rybak’s proposed 2009 budget includes $2.2 million for repair and expansion of the University’s bike trails.

As part of the MayorâÄôs 2009 proposed budget, the UniversityâÄôs bike trail will receive $2.2 million for repair and expansion. Minneapolis Mayor R.T. Rybak recently proposed more than $8.5 million for a program that will expand and maintain bike trails in the city and on campus. âÄúWithout this accelerated program, we would not have the recourses to adequately maintain these paths âÄî an unacceptable situation in the No. 2 bike city in America,âÄù Rybak told the Minneapolis City Council on Aug. 14. Ward 2 Councilman Cam Gordon said the UniversityâÄôs trail will connect the Minneapolis campus, Dinkytown and Downtown via Bridge 9 . However, students will not know if the trail will take shape until this winter because the City Council is still discussing the proposal. About $100,000 annually was also proposed to ensure the UniversityâÄôs bike trails are maintained. Maintenance could include lighting and pavement patching for the trails. âÄúThis is the first time ever we have had money dedicated from the cityâÄôs general fund to maintain the bike trails,âÄù Gordon said. Donald Pflaum, bike coordinator for the city of Minneapolis , said most of the money for the trail is coming from a federal grant. The grant, called the Non-Motorized Transportation Pilot Program, is part of a congressional study, in which four cities across the country get funding to determine what happens when a certain amount of money is invested in bike facilities, Pflaum said. âÄúWhat we are trying to do is get people out of their cars and onto their bikes and see what happens,âÄù he said. Steve Sanders, the UniversityâÄôs campus bicycle coordinator , said the trail has a long history in the city. âÄúThe trail has been funded twice before but, for various reasons, the project didnâÄôt go forward,âÄù he said. One of the major stumbling blocks was acquiring funding for the right-of-way, or the right to travel across land , near the railroad in Dinkytown, Sanders said. Part of the $2.2 million for the project will go toward securing that from the railroad. âÄúPeople have been working on this for years, [the right-of-way] has always been a critical element,âÄù he said. Julia Hill, a junior studying architecture, said the trail would be a good addition to the UniversityâÄôs transportation system. âÄúWith all of the traffic on campus, it is great for them to expand the bike trail,âÄù she said.