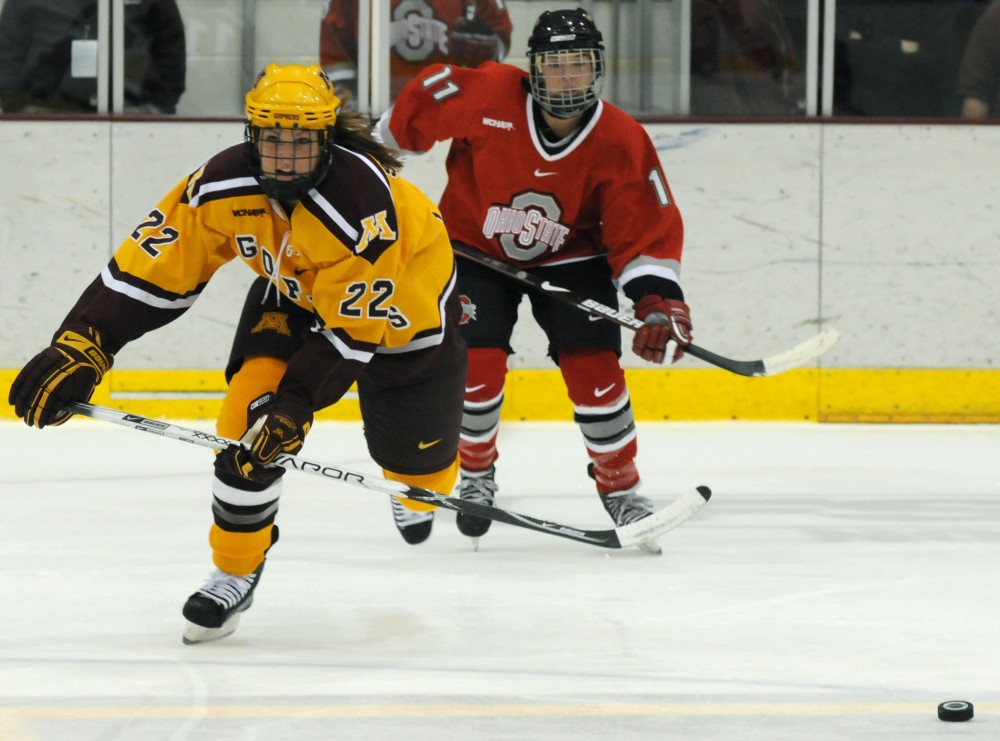 Freshman defenseman Anne Schleper chases down the puck at Ridder Arena during one of the Gophers two games against Ohio State over the weekend.

hockey team is on a roll. For the second weekend in a row, the Gophers swept their opponent. Twelve different players scored the teamâÄôs 16 weekend goals. The Gophers (4-0-0 Western Collegiate Hockey Association, 5-1-0 overall) beat Ohio State (0-4-0, 2-4-0 ) 8-1 Friday night and 8-2 Saturday. The Gophers came out ready to play Friday night, head coach Brad Frost said. They scored one minute and 21 seconds into the game when freshman Monique Lamoureux grabbed the puck at the blue line, fooled the goalie and put the puck in the net. Sophomore Emily West said the Gophers canâÄôt take any team lightly. âÄúWe have to come out as if we are playing Madison or Duluth,âÄù West said. âÄúWeâÄôre taking it one game at a time.âÄù By the end of the first period, junior Brittany Francis and senior Rachael Drazan both added goals on Ohio State power plays to make the score 3-0. Frost said the two early power play goals gave the Gophers momentum. âÄúI think it took the wind out of their sails, but more importantly put the wind into ours,âÄù Frost said. Even with the score in their favor, the Gophers had a tough time getting rebounds due to the BuckeyesâÄô defense. West said OhioâÄôs defense was tough to get through to rebounds in front of the net. âÄúThey picked up our sticks and thatâÄôs something we have to find a way to battle through,âÄù West said. The Gophers found a way and scored five more goals to end the game 8-1 . First-year goaltender Alyssa Grogan saw a total of 12 shots and Ohio StateâÄôs only goal of the game came on their eighth shot of the night. Frost said that goal was the coachesâÄô faults in not letting the players know who was switching for whom. Sophomore Jen Schoullis ended the night with two goals and was looking for a possible third by the end of the game. âÄúI needed one bad at the end of the game. I was diving everywhere,âÄù she said. âÄúCoach Frost was putting me out there and I was first forward changing.âÄù The Gophers started SaturdayâÄôs game similar to FridayâÄôs and scored three minutes into the gam e. Even though Minnesota was up 2-0 after the first period of SaturdayâÄôs game, Ohio State came out in the second period and scored two goals within the first two and a half minutes on sophomore goaltender Jenny Lura . She saw a total of 13 shots in the game. Frost said the Gophers didnâÄôt come out quick the second period and were caught off guard, but he was proud of how the team responded to regain the lead. âÄúOhio came out a lot harder and we stayed where we were playing in the first and unfortunately bang, bang itâÄôs a tie game,âÄù Frost said. âÄú[Ohio StateâÄôs] hard work paid off and it was kind of a wakeup call for our kids.âÄù First-year Sarah Erickso n said the team knew they had to pick up the pace. âÄúNothing was said on the bench except that we gotta pick it up. This isnâÄôt our style of play,âÄù she said. âÄúI think we all knew we had to dig deep and get it done within ourselves.âÄù Minnesota answered back as six different Gophers got a goal, ending the game 8-2. Juniors Kelli Blankenship and Chelsey Jones and first-year Nikki Ludwigson all scored their first goals of the season . Frost said the biggest strength of his team is their depth, as the coaches were rolling with all four lines both games. âÄúWhen all four lines are contributing to the score board, itâÄôs great for our team,âÄù freshman Monique Lamoureux sa id. âÄúIf we ever have one line struggling to get the puck to the net, we usually have another line that will go and bury it.âÄù