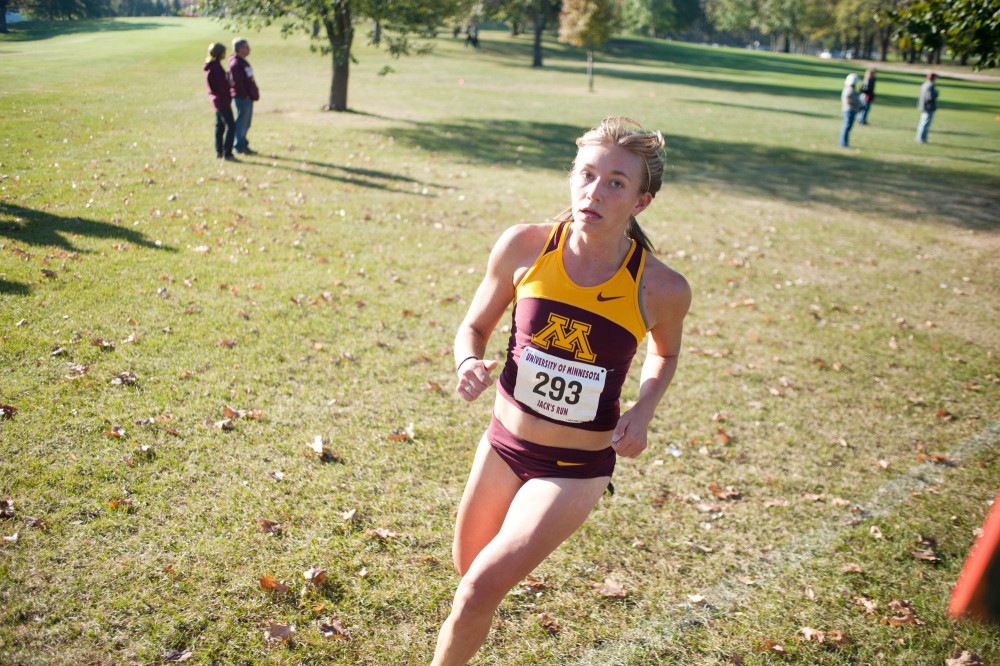 Junior Andrea Rediger was the first Gophers' first finisher at the Jack's Run on Saturday at Les Bolstad Golf Course. Gophers' head coach Gary Wilson said he is still unsure of who will earn the final roster spot for the Big Ten Championships next weekend in Champaign, IL.

The Gophers womenâÄôs cross country team hosted JackâÄôs Run over the weekend at Les Bolstad Golf Course.
There was a laid back atmosphere on the calm Saturday morning, as no team score was kept and the race was open to the public.
Juxtaposed with the serenity of the charity event, however, was a competition for the final spot on the roster Minnesota will take to the Big Ten championships next weekend in Champaign, Ill.
Entering JackâÄôs Run, head coach Gary Wilson said the spot would come down to a âÄúrun-offâÄù between Danielle LeBreck, Rachel Drake, Annie Talajkowski, Andrea Rediger and Claire Rindo.
Rediger was the GophersâÄô first finisher at JackâÄôs Run with a time of exactly 22 minutes.
Drake was the second Minnesota finisher with a time of 22 minutes, 17 seconds.
Even with Rediger finishing 17 seconds ahead of any of her teammates, Wilson said he is still unsure of who will earn the final roster spot.
âÄúWeâÄôre going to probably wait until [Monday] to decide. We have to do some overall calculations on total times for the last few meets,âÄù Wilson said Sunday. âÄúTheyâÄôre really basically a toss up. ItâÄôs a toss up between Andrea Rediger and Rachel Drake.
âÄúWe just want to make a smart decision and not rush it.âÄù
The womenâÄôs team rested its top runners over the weekend in preparation for the Big Ten championships. The entire menâÄôs team took a break from competition as well.
More than 100 runners of all ages participated in JackâÄôs Run, which raises money in honor of the late Jack Johnson, a longtime team equipment manager for the womenâÄôs cross country team.