Kelly Kleine is one of 14 women who work in NFL football operations. 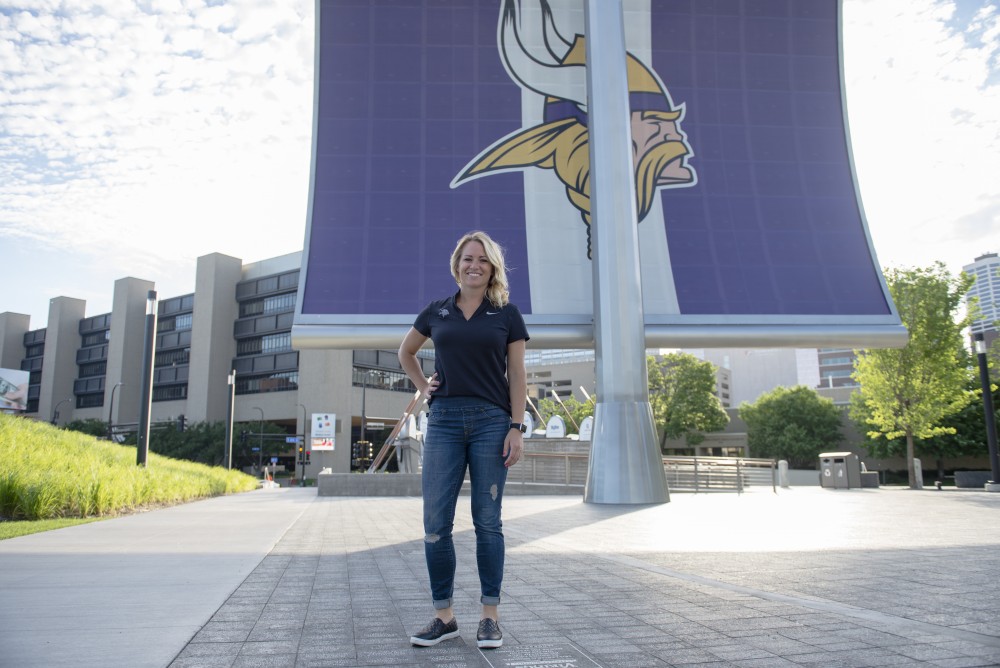 University of Minnesota alumna Kelly Kleine poses for a portrait in front of the US Bank Stadium on Wednesday. Kelly was hired as the college scouting coordinator for the Minnesota Vikings.

The NFL has 14 women currently working in football operations for teams across the league.

Kelly Kleine is one of those women.

Kleine — a 2013 graduate of the University of Minnesota — was promoted to college scouting coordinator of the Minnesota Vikings earlier this month.

“Watching how she interacted with everybody in the football side of it, you knew she had an opportunity to continue to grow,” said Vikings general manager Rick Spielman. “If you’re being critical because she’s a female on the football side, then that’s absolutely wrong.”

Kleine’s duties with the Vikings include coordinating visits and meetings with free agents, evaluating players and writing reports at pro days.

She also coordinated the Vikings’ trip to the NFL scouting combine in Indianapolis.

Kleine was always involved in sports from a young age. She was a three-sport athlete in high school, participating in golf, basketball and softball.

Kleine held many sports-related internships before getting a full-time job with the Vikings organization.

She interned for the PGA when the PGA Championship was at Whistling Straits. She interned at the Jack Brewer Foundation as well as Gopher Sports in her time at the University.

“What made Kelly do well was she was willing to do whatever we asked of her,” said communications assistant Sarah Turcotte, Kleine’s boss at Gopher Sports. “I’m just not surprised that it took that short of a time for her to become successful with the Vikings.”

After being an intern for about a year, Kleine picked up full-time employment with the Vikings as a college scouting assistant.

Anne Doepner, the director of football administration with the Vikings, handles contract negotiations with draft picks as well as other responsibilities.

Though the men in football administrations outweigh the women, Kleine said she does not consider herself a trailblazer.

“No one should be afraid of working in the industry with all men,” Kleine said. “A lot of men are very, very open to it. It’s just working hard and getting your foot in the door.”