The Gopher men continued their winning trend over the weekend as they beat both Washington and Drake. 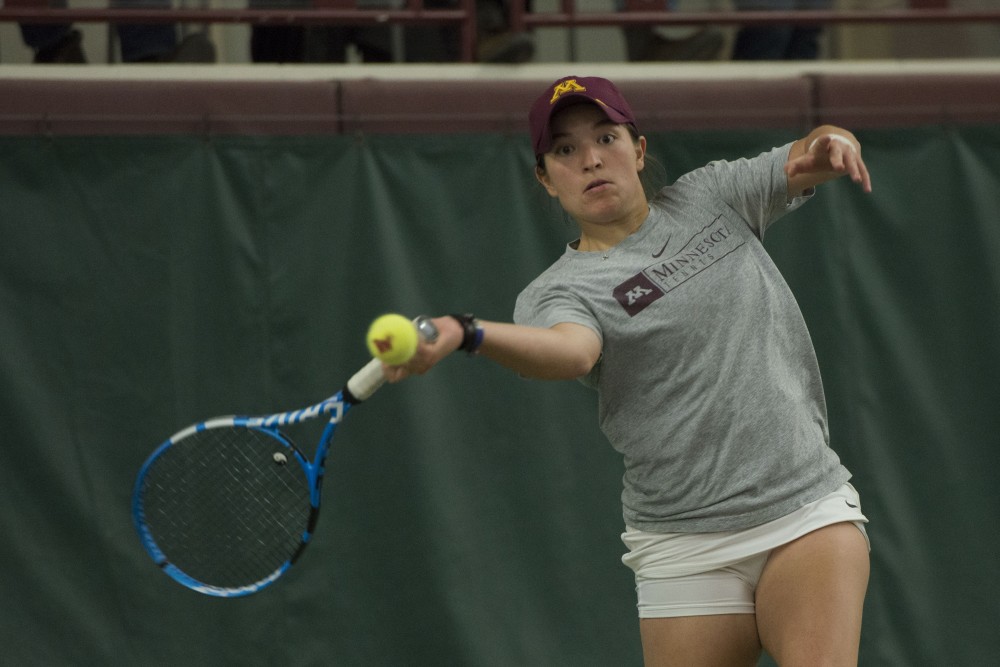 Senior Caitlyn Merzbacher returns the ball during her singles match against the University of Montana at the Baseline Tennis Center on Saturday, Feb. 2.

The Gophers men’s tennis (11-1), who just had a weekend off, came back right where they left off as they hosted and swept both the University of Washington and Drake University.

“It’s nice to cap off the home stretch with the results we wanted,” said head coach Geoff Young. “First season is over, second season is Big Ten season and that’s what next, and we’re really excited.”

On Sunday, everything went Minnesota’s way after a quick 6-1 rout of Drake.

Minnesota got started in the doubles competition with match victories for the No. 2 and No. 3 doubles pairs. The No. 2 team of Jackson Allen and Eli Ogilvy won 6-4 to lock up the point while the No. 3 team of Stefan Milicevic and Marino Alpeza won 6-1. The No. 1 doubles team of Josip Krstanovic and Justyn Levin fell to the Bulldogs 6-3.

“We’re always trying to … get better, but I think our doubles points have been great for us,” Young said.

The momentum from the doubles victory carried over for Minnesota, and they continued on to win the first three matches of singles. The only singles point given to the Bulldogs came when their No. 1 topped Krstanovic.

Minnesota added to its lead when Milicevic won 6-1,6-1 in the No. 2 singles role. Allen followed in similar fashion in No. 3 singles, winning 6-2,6-2. Ogilvy continued his hot start to the season staying undefeated in No. 5 singles after coming from behind 4-6, 6-4 and 6-2.

On Saturday against Washington, the Gopher men held their own and won 5-2.

In doubles, it looked as if Washington was going to take all three matches early. However, the No. 17 Minnesota team did not give in as Milicevic and Alpeza came back and won 6-4. The No. 2 team of Allen and Ogilvy came out on top with a 7-5 victory. No. 1 doubles Krstanovic and Levin were tied at 6-6 at the time of the double’s victory.

Alpeza was the star in the singles for the Gophers in the No. 4 spot as he swept his opponent in two sets, winning 6-4 and 6-3.

Minnesota returns to action Sunday as the team travels down to Madison, Wisconsin to kick off the Big Ten season.

The Minnesota women’s tennis team (5-6, 0-1 Big Ten) traveled down south to Houston, Texas over the weekend as they matched up against the University of Denver, but fell short.

“Credit to Denver, they were just too tough,” head coach Catrina Thompson said.

The women’s doubles won only one of the three games, but Thompson saw positives in their new No. 3 spot as Camila Vargas and Bita Mancera were paired up for the first time and won 6-2.

“We did a good job at three doubles. … They hadn’t been playing together in the past little bit, so it was nice to see them come through,” Thompson said.

One thing Thompson said she wanted to see out of her No. 1 and No. 2 doubles teams was more aggression.

“We talk about it in practice and work on it in practice, but now we need to implement [the aggressiveness] during the matches,” Thompson said. “

For Thompson, the match against Denver had a little more meaning because her twin sister, Christian, is the Pioneers’ head coach.

“It was unique in the sense that we’ve always been teammates, or on the same side of the court together,” Thompson said. “To face each other as opponents was definitely a new situation that we’ve never been through before.”

The Gophers were supposed to match up against the hosting Rice University Owls Sunday, but the match was canceled due to rain and won’t be rescheduled.

Minnesota will return to action as it hosts Iowa State and Drake back-to-back on Saturday.