The loudest Minnesota-Wisconsin rivalry this spring: A cappella

“Battle for the Vox” takes place this Saturday at Northrop. 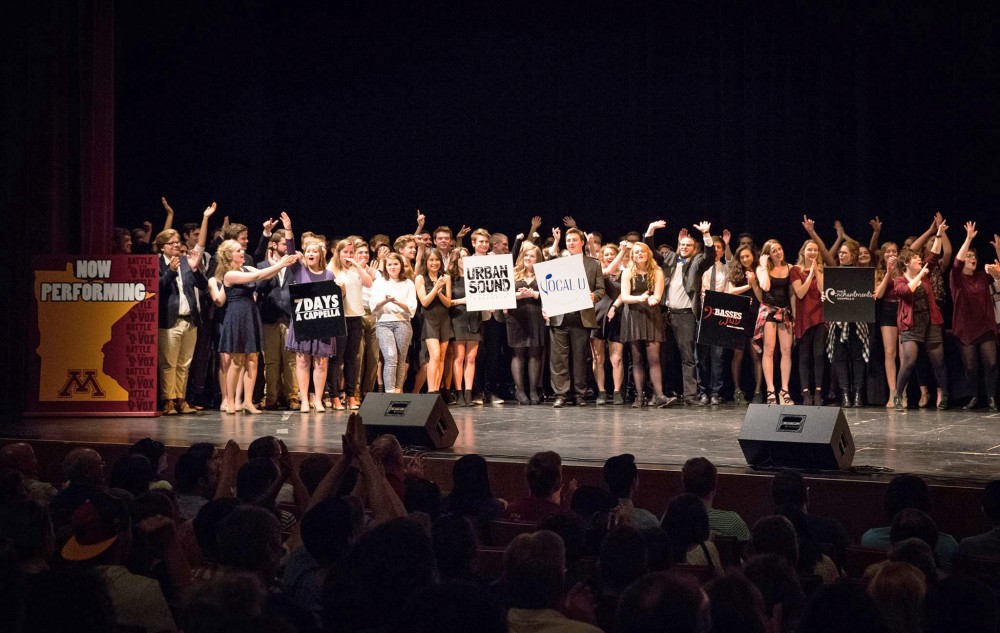 University of Minnesota a cappella groups stand on stage as the winner of Battle for the Vox is announced.

This Saturday, Northrop Auditorium will be host to one of the biggest university a cappella events nationwide — besides the International Championship of Collegiate A Cappella, of course (that’s the competition you know from “Pitch Perfect”).

Battle for the Vox (Latin for “voice”) is a border-battle event organized between the University of Minnesota and University of Wisconsin-Madison a cappella communities.

“We’re not just some small a cappella concert,” University of Minnesota 7Days A Cappella member and marketing and political science junior Steven Vogel said. “It’s a big night out.”

The event is organized into seven performance categories. After each category, audience members vote for their favorite performance via Facebook poll.

“Each group will be singing three songs total,” University of Minnesota psychology senior and Vocal U A Cappella member Leah Henriksen said. “In each category there are at least two Wisconsin groups and at least one Minnesota group.”

Categories range from the classic (belt-off, ballads) — to the niche (girl power). Many groups perform songs featured in their spring showcases, with some special favorites. (7Days has a “Shrek” medley. No kidding.)

The event is student led and coordinated; Battle for the Vox organizers emphasize the greatness of this feat.

“All you see is singing, which is really cool … but we’re five student groups and we’re planning [one of] the biggest concerts on campus,” Vogel said. “It’s a testimony to how hard working and dedicated the a cappella community is.”

“There are two types of people,” Vogel said. “People that know ‘Pitch Perfect’ and are like, ‘Oh, is that what you do?’ We say, ‘Pretty much, yeah. Minus the flips and the pettiness.’ [ … ] The people who don’t know a cappella just assume we sing with our friends on the weekends. But it’s a huge operation; we function as a small business.”

After all, who can resist a rivalry?

But as competitors, Minnesota and Wisconsin’s university a cappella communities are some of the most loving. This year, Minnesota groups will play host to their rivals both locale and sleeping-arrangement-wise. There’s a joint after-party.

“It’s a friendly competition with Madison,” Vogel said.  “I would say it’s less so the importance of competing to win and more so just fun because we’re all competitive.”

“All the Minnesota groups are incredibly nice to all the Wisconsin groups,” Alex Reis, a communications major at UW-Madison and member of Madison a cappella group Fundamentally Sound, said. “Any bitter rivalries … I don’t know if they have them against us but we don’t have them against them.”

Ideally, Battle for the Vox is supposed to switch locations yearly. Because of organizational issues, last year’s event at Madison didn’t happen. This is the second (to be annual) event, and Minnesota has the home field advantage once again.

As the day draws nearer, groups have been practicing. Choreography is in place, jumpsuits have arrived in the mail and ticket sales are running smoothly. All that’s really left is showtime.

“My throat is a little sore,” Vogel said. “But we sound good.”