Freshman Lexy Ramler finished first in the all-around for the second consecutive meet. 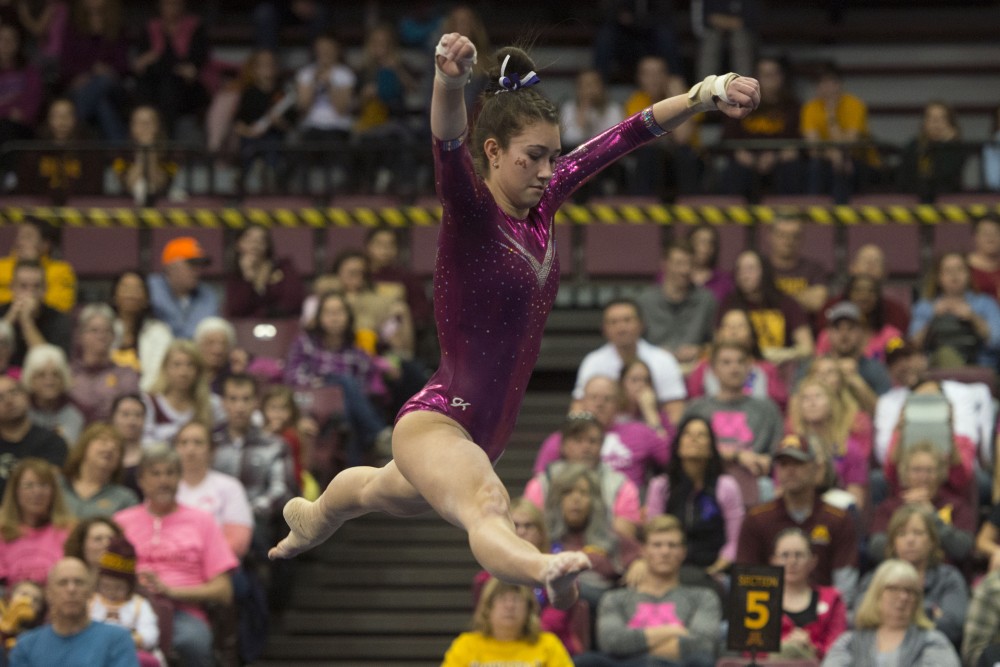 Many fans at Maturi Pavilion wore pink during Minnesota’s annual Always Dreaming Meet on Saturday, a meet to raise awareness of cancer.

“I ended up with a win, so [the meet was] even better,” Ramler said.

Freshman Ona Loper finished first in the floor and vault exercises. Loper earned a score of 9.9 on both her vault routine and her floor routine. She said she was excited to compete for the Gophers for the second time.

“As a freshman, you don’t know what to expect here,” Loper said. “Having the support of the team is really helping.”

Sophomore Ivy Lu finished first in the bars event, receiving a score of 9.9. Senior Hannah Hitchcock broke a personal record in the vault event with a score of 9.85. Senior Abby DeMuse made her season debut and earned a score of 7.7 on her vault routine.

“[Ramler is] a wonderful athlete,” Hansen said. “She’s super consistent and she does that every day in practice. She is [definitely] a perfectionist and wants to do everything she can as perfect as she can every time.”

Minnesota finished first in each event. The Gophers had three gymnasts earn a score of 9.9 or higher — Loper, Lu and Ramler.

Loper said it was great to see fans come out and support Minnesota and a good cause. She hopes this meet will inspire girls to try gymnastics.

“Everyone was having a fun time,” Loper said. “Allowing other girls to experience the same type of love is exciting.”

Hansen said the team is excited to hit the road for their next meet. She said there isn’t a huge difference between competing at home and competing away from Maturi Pavilion.

“The great thing is it’s the exact same routines we’ve been doing,” Hansen said. “It’s just in a different venue [and] a different atmosphere. We’re going to practice different things in the gym. I think [the team is] ready to take this show on the road.”