The Daily rode along on a Saturday night patrol with Sgt. Andrew Panek. 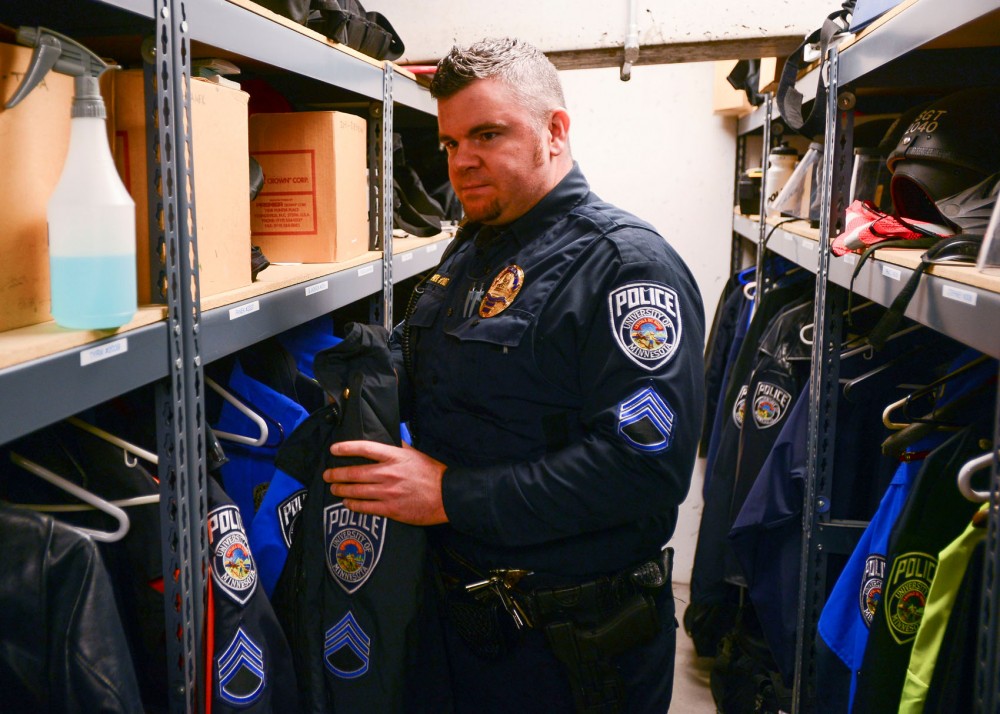 Sergeant Andrew Panek of the University Police Department gears up before going out on his late night patrol. Panek routinely checks his car and equipment before going out on any patrol so that he can depend on the use of his supplies when they're needed in the field.

University of Minnesota police Sgt. Andrew Panek pulled to the side of East River Parkway on Saturday night and shone his spotlight on a suspicious vehicle parked near the Weisman Art Museum.

He got out of his car to see what the driver was up to, only to find a student eating a Subway sandwich.

Panek let the student finish his sandwich and drove off to continue his patrol around campus. It was a slow night, but he said police need to be prepared for anything.

“That’s what we’re here for, because who knows?” Panek said. “The investigator in the cop is always saying he could be waiting for his friend who’s lifting the Weisman Museum.”

Nowadays, the life of a University patrol officer can be boring, he said. Crime on campus has dropped 54 percent since Panek was hired by the University in 1998, leaving fewer calls to respond to.

“It’s like we kind of shot ourselves in the foot,” he said, “because we used to go down and do all this cool stuff [to fight crime], and now we have to find where it all went.”

When calls aren’t coming in, one of Panek’s favorite pastimes is “fishing” for speeders on the 10th Avenue Bridge. He’ll pull over and flip on his hazard lights to look like a disabled vehicle.

It’s an easy way to catch speeders because most people aren’t used to the new Ford UMPD squad cars, which replaced some of the department’s Crown Victorias in November.

During traffic stops, he said he’ll let people off with a warning when they are honest and admit their mistakes.

Though Panek enjoys traffic enforcement, he said he knows a patrol can become hectic with a flurry of service calls at any time.

“It depends on the day,” he said. “Sometimes you’re on a night, and it’s just call to call to call, but then there are other nights where you’re just kind of rolling around, waiting for things to happen.”

While patrolling Saturday, Panek got a call to check out a silent alarm call coming from the Mechanical Engineering building.

After checking it out, Panek hopped back in the car, drove onto the sidewalk and plowed through the snow blocking his access to the road.

It was just a false alarm, but Panek said an officer can’t afford to be complacent.

He said he once responded to an alarm at Williamson Hall and found two burglars trying to break into an ATM.

“So, the reverse side of the coin is you get all this monotony and all this downtime, and then, all of a sudden, boom,” he said. “It’s amazing.”

There are several hot spots for crime on campus, like the University’s West Bank, Panek said, but crime can come in spurts just about anywhere.

“[The U] being smack-dab in the middle of an urban setting poses a unique set of challenges,” he said. “It quite literally justifies our existence.”

For example, University police have to monitor Minneapolis crime trends because they will inevitably affect the University.

Despite the proactive efforts of University police, he said most of his job is still responding to crime instead of preventing it, which is frustrating.

“You can beat yourself about it, and you can complain and gripe, but really, there’s nothing you can do,” he said. “But what is in your control is how you react to it.”

That area, along with University parking ramps, is notorious for theft calls, Panek said.

Theft is the most common crime on campus but has decreased from 719 incidents in 2001 to 485 last year.

Panek said he’s still shocked when he hears of students leaving their valuables lying around, only to return and find them stolen.

One of the best parts of the job is catching a thief or any other criminal in the middle of his or her crime, he said. It’s moments like those that make policing worthwhile.