A carpenter’s union is picketing the developer for hiring non-union workers. 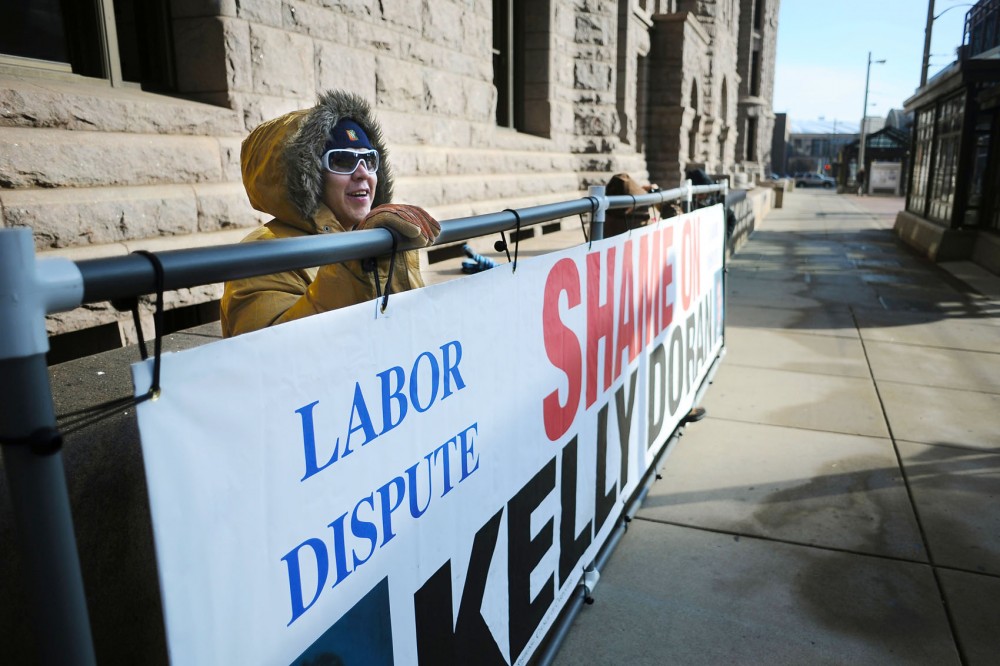 Representatives of the North Central States Regional Council of Carpenters protest the contracting practices of Doran Companies on Wednesday outside Minneapolis City Hall.

Kelly Doran, a prolific campus-area developer, is in the midst of a public dispute with the local carpenters union.

North Central States Regional Council of Carpenters is protesting Doran and his company, claiming his use of non-union laborers exploits carpenters by cutting benefits.

Doran manages and developed four high-profile apartment buildings near the University of Minnesota campus including Sydney Hall, 412 Lofts and the new Edge on Oak.

“Kelly Doran and Doran Companies … have contributed to the erosion of the area standard wages and benefits by apparently using a subcontractor that undercuts area standards for carpenters on a project in Minneapolis,” the union said in a statement.

The dispute will not delay work on Mill & Main or Doran’s in-progress student housing project — the Knoll.

Doran said 19 different unions make up 93 percent of the labor for Mill & Main and that the bids from union sheet rock workers were too expensive to justify.

“I’ve spent millions of dollars extra over the last three years employing union labor versus non-union labor,” Doran said. “But in this particular instance, the cost was just too great.”

This is not an uncommon bind for developers, said Daniel Oberpriller, president of CPM Development. CPM is building upcoming Elysian and WaHu student housing complexes.

Doran said he’s only had one other dispute with the carpenters union when logistical issues prevented him from hiring union workers for a project in Rochester, Minn. Doran said most of his projects in the metro area are built by more than 90 percent union workers.

The union’s statement claims Doran’s hiring practices contradict the platform he used during his failed 2006 gubernatorial run with the Democratic-Farmer-Labor Party. A cached version of Doran’s campaign website touts the developer as a job creator for union laborers.

A flier from union protestors at City Hall called Doran a “rat,” condemning him for “desecration of the American way of life.” It says Regal Contractors doesn’t fully pay for pensions or family health benefits, a violation of union standards

“They call you names; they call you un-American; they call you a rat,” Doran said. “[But] I’ve put meals on plenty of carpenter’s tables, and I’ve bought a lot of Christmas presents through the wages I’ve paid to union carpenters over the past years. If there’s any shame on this, it’s the shame on the union.”

Doran said he is beginning to rethink his hiring practices, saying future projects, such as the upcoming Bridges student housing, may not use as much union labor.

The company is receiving bid requests it wouldn’t have before the protest, Doran said, from potential clients that are more interested in working with a contractor that doesn’t employ union workers.

“I haven’t had this kind of experience with other unions, but if they’re going to follow the path of the carpenters union, then I don’t know why I would pay a premium to be treated this way,” he said.