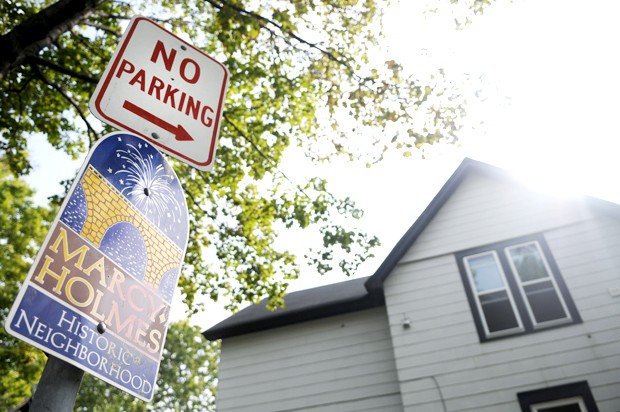 Future housing developments in the University district are now required to provide half a parking space for each bedroom in the unit. The city believes the new rules will lead to better student housing. Others think the rules are designed to push students out of the neighborhood. The new change does not apply to buildings already existing in the area. The regulation comes after an eight-month review by the University District Partnership AllianceâÄôs Zoning and Planning Regulatory Review (ZPRR) taskforce. The review process was prompted by concerns voiced by neighborhood associations over the land use, development and parking in the Marcy-Holmes, Prospect Park, Southeast Como, and Cedar-Riverside neighborhoods . The old zoning code, still in use elsewhere in Minneapolis, required one parking space for each house, assuming a house is a single-family home. However, the presence of multiple student residents in single-family homes has led to inadequate parking space in the neighborhoods. The new rules are an attempt to increase parking space and reduce pressure on the neighborhoods to replace houses with rentable one to four-unit homes, or âÄúmini-dorms.âÄù University Director of Community Relations Jan Morlock said the change is a âÄúpositive step forwardâÄù that recognizes the âÄúmarket conditions and demography unique to the University neighborhoods.âÄù A four-bedroom home in another part of the city wouldnâÄôt need two parking spaces, but near the University where most residents are not families, more parking is needed, she said. Other potential positive outcomes include preserving neighborhood homes from being turned into rental property and freeing up more parking spaces for the elderly and long-term residents. Landlords, however, are not convinced this change will solve parking problems or that it is in the interest of students. Several think overcrowded parking in the neighborhoods could be solved if the University provided more parking spaces with reduced prices on campus. University Concerned Landlord Association President Jason Klohs said this would discourage commuters from parking in the neighborhood. Klohs also said the regulation may prevent developers from constructing houses in the University district because of the cost of providing more parking. Principal City Planner Haila Maze said this was the purpose of the change. âÄúWe want to encourage larger scale student housing âÄî not high rises, but small apartment buildings in the Dinkytown area,âÄù she said. Larger scale student housing may require underground parking, which University Neighborhood Improvement Association Executive Director William Wells says could raise student rent by 30 percent. Applied economics and history junior Matt Laue , who was involved in the research process, thinks high-rises close to campus would be âÄúclean, safer, well regulated and cheaper. This [change] is not about parking,âÄù he said. âÄúThis is about making it harder for mini-dorms with absentee landlords to be built.âÄù There is speculation amongst landlords that the city deliberately approved the ZPPR recommendations in the summer to discourage student input, but Maze said the zoning process was publicly available since last December. Ward 2 City Councilman Cam Gordon said zoning changes in the Prospect Park neighborhood are anticipated to take place in the near future.