Carlson to award soup can to senior

The Tomato Can Loving Cup honors Carlson seniors who have worked to better the University community. 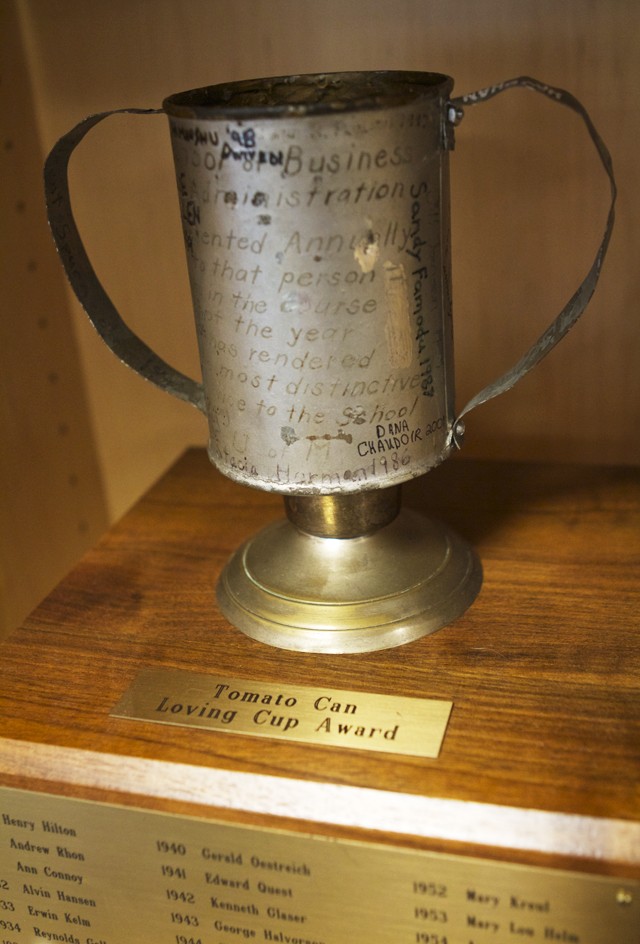 The Tomato Can Loving Cup Award is on display Tuesday in Herbert M Hanson, Jr Hall.

A soup can and a candlestick were unwittingly stuck together more than 80 years ago to create a Carlson School of Management award, handed out annually to this day. And come undergraduate commencement May 17, one more graduating senior will join the Tomato Can Loving Cup recipients club as the 81st member. Since 1929, the award has gone to a student who has shown outstanding leadership outside the classroom, said Mary Maus Kosir, Carlson assistant dean of undergraduate programs. That year, students at Carlson sought some sort of recognition for outstanding work by a senior at the school. Henry M. Hilton jokingly fashioned a trinket out of an old tomato soup can and a candlestick that his mother owned. His creativity paid off, as he was ironically the recipient of the prize its first year, Carlson spokesman Johnny Thompson said. Students are now awarded more than an old tin can, although the prizeâÄôs value was severely lowered this year. Whereas the last 10 years saw a prize of a full ride to the Carlson MBA program, this year the prize is $500, Kosir said. The prize change was not in response to the recession; rather, it was because previous winners did not consistently take advantage of the MBA program they were awarded. âÄúI was super surprised and very honored,âÄù said Shannon Peloquin, the 2006 winner. âÄú[I was] walking on cloud nine on graduation day.âÄù After nominations for winners are submitted by Carlson community members, a committee appointed by Kosir chooses the winner, she said. Every winner thus far has a name on the can. âÄúSo far weâÄôve been able to kind of fit the name[s] of the winners on it somewhere in some shape or form, or at least the initials,âÄù Kosir said. âÄúItâÄôs really fragile.âÄù Because of its condition, the prize is now kept in a Hanson Hall display case. Recipients get the item for about an hour to take pictures, Kosir said. âÄúWhatâÄôs also attractive about it is just the history of what it looks like,âÄù she said. âÄúIt was clearly kind of pieced together decades ago and somehow weâÄôve managed to preserve it.âÄù The award is unique in what it honors, Kosir said, as the award is âÄúnot meant to be academic in nature.âÄù While most other Carlson awards recognize grade achievements, in the Tomato CanâÄôs case, GPA is âÄúa little bit more casual.âÄù The committee looks more to students who have had a presence working to better both the University and Carlson communities, as well as communities surrounding campus. Previous winners include the founder of Women in Business, now the largest student group in Carlson, and a student who was active in lobbying for University funding, Kosir said. As is tradition, this yearâÄôs winner is under wraps until undergraduate commencement. Six finalists with different backgrounds and passions were selected Tuesday afternoon, Kosir said. For Peloquin, who is now a consultant at McKinsey & Company, the old soup can is even a career tool. While no one knows of the award outside of Carlson, âÄúitâÄôs a good conversation starter, and itâÄôs definitely something that IâÄôve used on my applications âÄ¦ in terms of one of my big achievements,âÄù Peloquin said. When listing the Tomato Can Loving Cup on job applications, Peloquin includes a note in parentheses for confused interviewers: âÄú(CarlsonâÄôs most prestigious award.)âÄù