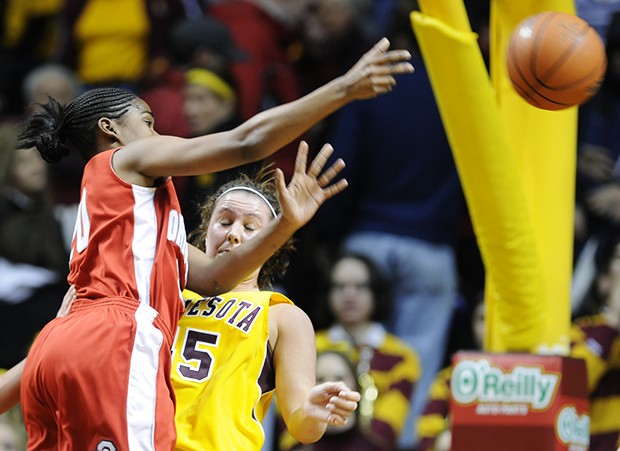 After Brittany McCoyâÄôs banked-in 3-point shot with 1.9 seconds left in MinnesotaâÄôs 60-59 victory over Michigan on Sunday, the Gophers carried huge momentum into their next game on Thursday against No. 17 Ohio State. Not only was the late-game road win fresh on the GophersâÄô minds, but Minnesota also did not forget their shocking 59-56 win on Jan. 15 over then-No. 13 Ohio State âÄì snapping a 24-game road losing streak with the Buckeyes. The Gophers confidence showed early on, but the second-half showed that the Buckeyes hadnâÄôt forgotten the Jan. loss either, with a 73-62 comeback win over Minnesota in Williams Arena. âÄúItâÄôs like revenge almost,âÄù Ohio State sophomore center Jantel Lavender said. âÄúWe knew that Minnesota was a fighting team, the loss at home really opened our eyes and we knew we needed to play well here.âÄù The Gophers (18-8 overall, 10-5 Big Ten) looked like the team with more energy and excitement from the moment the starting lineups were announced, as junior guard Katie Ohm hit two-straight 3-pointers and McCoy scored a fast-break layup to give Minnesota a 8-4 lead nearly four minutes into the game. Ohio State (21-5 overall, 12-3 Big Ten) sensational-center Lavender was also held in check during the entire first half, scoring just four points and sitting on the bench in foul trouble to give Minnesota a 30-26 lead at halftime. âÄúWith lavender out in the first half, it was worrisome that we were up by just four points,âÄù Gophers coach Pam Borton said. While the Buckeyes made a strong push in the second half, it was not all due to Lavender. The 6-foot-4 2008 Big Ten Player of the Year averaged 21.2 points and 10.8 rebounds per game coming into Thursday nightâÄôs contest, but the Gophers team-effort against Lavender held the center to just 14 points and a measly three rebounds. Although Lavender had a slower night by her standards, the Buckeyes used their plethora of offensive weapons to pick apart MinnesotaâÄôs defense. Ohio StateâÄôs starters finished with 57 of the teams 73 points, with four players scoring in double figures. âÄúThere were a lot of people that were responsible for our strong second half,âÄù Buckeyes coach Jim Foster said. Pesky point-guard Samantha Prahalis led the way for the Buckeyes with 17 points and nine assists, as the freshman went head-to-head all night with Gophers senior guard Emily Fox. Fox slightly out-did Prahalis in points with 18 on the night, and each guard pushed the tempo of the game each time they had the ball. The Buckeyes flourished with the second half tempo while the Gophers began to fade away, as Ohio State shot 65 percent after intermission. MinnesotaâÄôs most consistent player in junior Ashley Ellis-Milan struggled mightily on offense, as Borton said she rushed her shot in the post. âÄúWe had too many turnovers and too poor of post play to beat a good basketball team in Ohio State,âÄù Borton said.