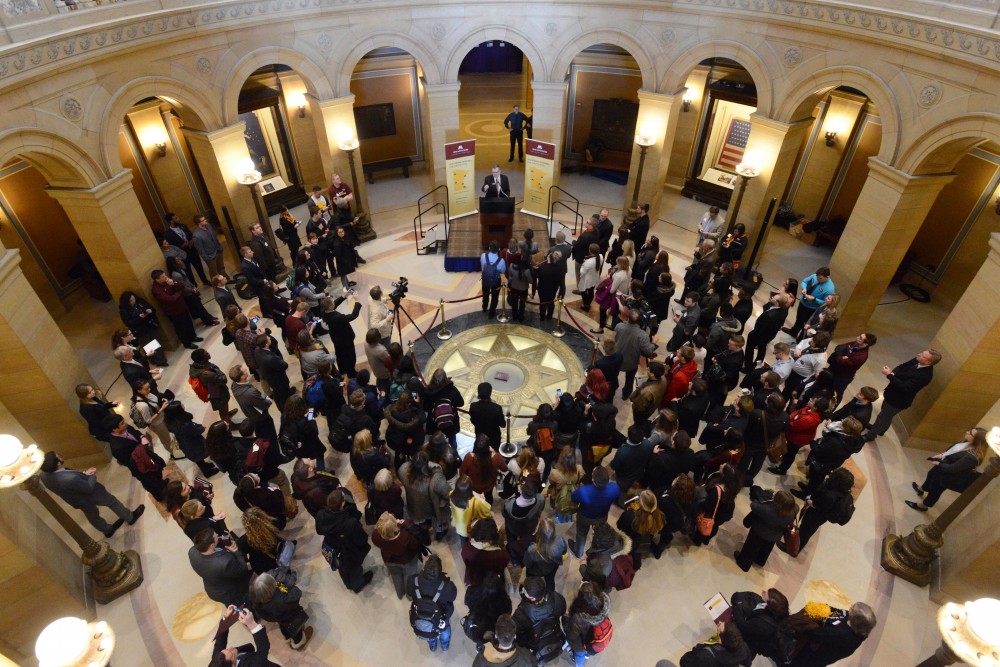 University President Eric Kaler speaks to a crowd of students during Support the U Day at the Minnesota Capitol on Wednesday, March 1, 2017.

University of Minnesota resident and non-resident students could see tuition hikes this fall.

At a House higher education committee meeting Wednesday, University President Eric Kaler told legislators an increase may come even if the state fulfills the school’s $147.2 million biennial budget request. And with a surplus in the state budget announced Tuesday, some think full funding may be more likely.

The increase could come as early as this fall, he said, but students whose families make under $120,000 would likely see the increased costs mitigated with scholarships or other aid.

Kaler said the tuition hike is a result of the Legislature not granting the University all of its requested funding in past years.

Kaler said at the meeting only 14 percent of students would have to pay the price, as the other 16 percent of non-residents come from tuition reciprocity states.

The question about retention “worries me to death,” Kaler said, adding he’s unsure how financially flexible the non-resident student population is.

“If we don’t invest, frankly, tuition will go up, quality will go down,” he said.

At 12 p.m. Wednesday, as part of the annual Support the U Day, about 200 students, faculty, staff and alumni gathered in the capitol building’s rotunda to hear speakers like Kaler, Head Football Coach P.J. Fleck and Minnesota Secretary of State Steve Simon.

He encouraged students to talk to their legislators to help build relationships.

After the rally, students were able to speak with legislators individually.

“I am here today to encourage my representatives to continue to support the [University] and continue to fund us,” said Scott Benz, a biochemistry junior at the Morris campus.

While some are hopeful this could mean more money for the University, others think school funding could take a backseat to other matters.

“To see [the budget has] grown a little bit more is all positive,” said Nornes, chair of the House higher education committee.

Dean Johnson, chair of the University’s Board of Regents, said the school is in a better position for funding than before, but the Legislature will still weigh between many priorities.

“We at the University are hopeful that strong consideration will be given to our budget request, which the Legislature will now digest, amend and investigate,” he said.

With the new forecast, budget negotiations will get more serious, Nornes said.

Still, other priorities — like tax cuts and slowing the growth of a rising state budget — may compete with the University for the funding, he said.

“It just raises the competition I think that much more,” Nornes said.

Tax cuts and a transportation bill could also take away some of the extra funds, Cohen said.

But the increased budget could be at risk due to federal uncertainty, which Cohen said makes him want to invest some of the surplus into the state’s reserve fund.

At a press conference Tuesday, Gov. Mark Dayton said he was satisfied with the budget increase but urged legislators to be cautious of the potential federal risks.

With the surplus, Dayton said he may now consider putting some of the money into the state’s reserve fund to account for the risks.

“The uncertainty surrounding this budget forecast demand extreme caution and restraint from my administration, the legislature and various affected interest groups,” he said.

Natalie Rademacher contributed to this report