The Gophers trail St. Cloud State by five points in the WCHA race. 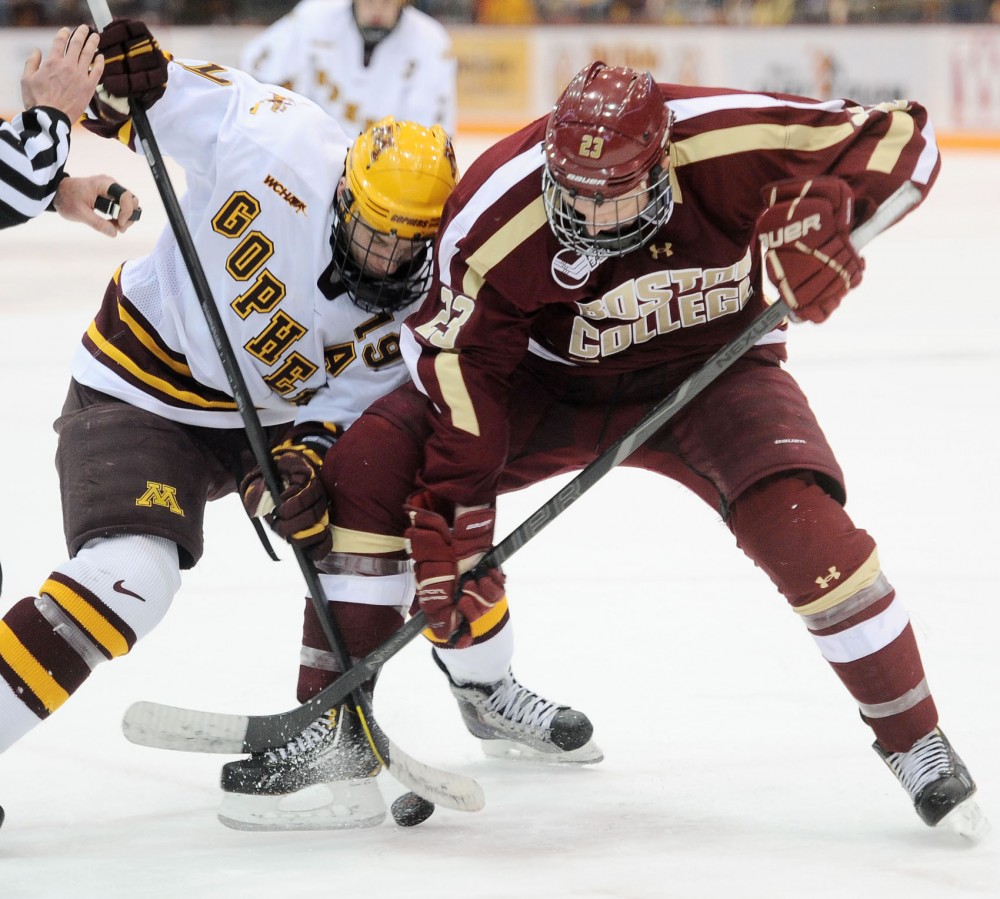 Most hockey fans believed from the start of the season that the leader of the Western Collegiate Hockey Association would be in action this weekend for the series between Minnesota and St. Cloud State.

Few would have guessed the Huskies would be the team atop the standings.

The No. 1 Gophers (18-4-4, 10-4-4 WCHA) will travel to SCSU for a two-game conference matchup this weekend. It’s the only time the two schools will play in the regular season.

The No. 8 Huskies (17-10-1, 14-5-1) have a three-point lead over second-place Nebraska-Omaha and a five-point lead on the Gophers, who are tied with Denver and North Dakota for third place in the conference.

“They are the ones with the target on their back,” said Nate Schmidt, a St. Cloud, Minn., native. “It’s going to be an exciting series, especially with where they’re at in the standings right now.”

Despite leading the conference, SCSU climbed into the top 10 of the USCHO.com poll this week for the first time all season.

The reason for the lack of national recognition has been the Huskies’ nonconference schedule.

SCSU was swept by New Hampshire and Northern Michigan and split a home series with Rensselaer Polytechnic Institute.

The Gophers are 8-0-0 in nonconference play, and the Huskies are 3-5-0, with two of their wins coming against lowly Alabama-Huntsville.

Recently, the Huskies have notched a home sweep of Denver, a win and a tie at North Dakota and a convincing road sweep of Bemidji State.

The Huskies did not take a penalty in their series last weekend against the Beavers, and it’s unlikely the Gophers will spend much time with the extra man this weekend.

“It’s always important,” Erik Haula said of capitalizing on power-play chances. “I feel like it’s going to be big both ways.”

Having Haula back at 100 percent and back at his natural center position should help power the power play this weekend. Haula had his hand slashed in a game against Boston College a little more than a month ago.

“He’s been a lot better in practice,” Schmidt said. “You can see that the pain is kind of going away.”

Lucia said that SCSU’s lack of penalty minutes did not surprise him and said he expects a fairly clean series between the two teams.

SCSU will throw a very balanced attack at Minnesota, as four players have 12 or more goals this season for the Huskies.

A lot of those goals were set up by senior Drew LeBlanc, who leads the nation with 30 assists. LeBlanc also has eight goals on the year and ranks second in the nation in total points.

LeBlanc broke his leg last year in early November and missed the rest of the season.

“Getting him back as a fifth-year senior has really helped their team,” Lucia said.

Schmidt said it’s important to know where LeBlanc is on the ice at all times.

“He’s one of those guys that likes to slow the game down a little bit,” Schmidt said. “We’ve got to make sure that, as a [defensive] corps, we close on him really quickly.”

After a fairly strong freshman campaign, sophomore Ryan Faragher has been strong between the pipes this season as St. Cloud’s main goaltender. His 16-8-1 record is fourth-best in the conference.

The location of the games could make a difference in the outcome. The Gophers have historically been a very good road team, but the crowds at the National Hockey and Event Center are known as some of the rowdiest in college hockey.

“Everyone hates the Gophers,” Haula said, “but especially there.”