The Gophers lost to Michigan at home for the first time in 14 years. 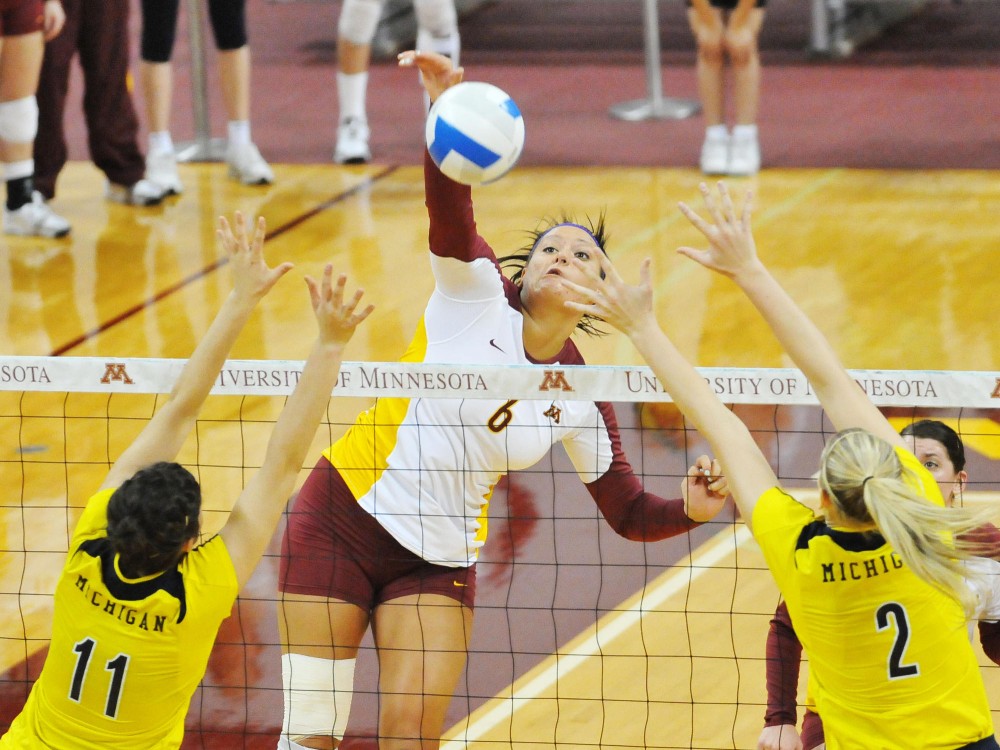 Tori Dixon led her team well during the Gophers' volleyball game against Michigan Sunday in the Sports Pavilion. The Gophers lost in all three sets to the Wolverines.

Just when the game seemed to be coming together for the Gophers volleyball team, things fell apart.

No. 16 Minnesota lost in straight sets at home to No. 24 Michigan on Sunday, ending the GophersâÄô 13-match home winning streak against the Wolverines.

Minnesota fell to 8-8 in the Big Ten (15-10 overall) with the loss, which puts them out of contention for a top-three spot in the Big Ten.

âÄúWe played uninspiring volleyball,âÄù Gophers interim head coach Laura Bush said, âÄúand Michigan was able to capitalize on it. They hit great, they blocked great, they fixed their problems earlier than we were able to fix our problems.âÄù

Michigan (18-10, 6-10 Big Ten) won its first match against a top-20 opponent and did so without its star hitter, Alex Hunt, who rolled her ankle during warm-ups. Hunt had 22 kills in MichiganâÄôs 3-1 loss to Wisconsin on Friday, but exited SundayâÄôs match after playing four points in the first set.

The Wolverines also won despite a career performance from Minnesota outside hitter Katherine Harms through one and a half sets. Harms had 10 kills in her first 12 attempts, but the Gophers were unable to capitalize.

When Michigan finally found an answer to Harms, the match was all but over.

Shortly after Harms recorded her 10th kill in the second set, the Wolverines went on a 15-6 run to take an 18-15 lead. Harms committed four attack errors during that stretch âÄî two on Michigan blocks âÄî after making none in the first set.

She added five more attack errors in the third set and finished with a .129 hitting percentage.

âÄúI think Michigan just made a change,âÄù Harms said. âÄúThey had decided I was someone that they had to be careful of. But it was OK in the end because it opens up my other hitters so then theyâÄôre hopefully one-on-one.âÄù

The Gophers were unable to capitalize on those one-on-one outside matchups because freshman setter Kellie McNeil struggled to connect with her other hitters.

Ariana Filho and Hailey Cowles had two kills each. Tori Dixon (11 kills) and Ashley Wittman (14) played consistently but never got into a rhythm with McNeil setting.

âÄú[McNeil] chose not to set the middles, and we had to get them involved,âÄù Bush said. âÄú[MichiganâÄôs] middles were not even paying attention to our middles.âÄù

Trailing 12-8 in the third set, Bush subbed in junior setter Mia Tabberson for McNeil. Tabberson led the Gophers on a 10-4 run to cut MichiganâÄôs lead to 23-22, which included three consecutive kills from Dixon, the teamâÄôs star middle blocker.

Then the Wolverines called timeout and closed out the match with a pair of kills.

âÄúMia definitely provided a spark for the team âÄî the serving, the emotion, being able to connect with our middles,âÄù Bush said. âÄúIt started to build some momentum. We just didnâÄôt have enough time to make up for how far down we were.âÄù

Tabberson said that setting Dixon was key to their run.

âÄúObviously Tori is one of our main offensive weapons. I had three rotations with her and tried to set her every ball I could,âÄù Tabberson said.

Tabberson added two aces during the teamâÄôs third-set run. McNeil had a run of three aces early in the set, and the freshman finished with four aces for the second consecutive match.

But MinnesotaâÄôs other servers made costly errors. Wittman had three service errors, which prompted Bush to replace her with Steffi Sooter in the service rotation.

The Gophers finished with 11 service errors âÄî their most in a three-set match this season âÄî and eight aces, which tied a season-high.

Minnesota travels to Nebraska next for a match with the Big Ten-leading Huskers (14-2) Wednesday.

The Gophers lost to Nebraska in five sets at home Oct. 15.