For University international students, winter break meant a month of trying to find ways to beat the Minnesota cold. 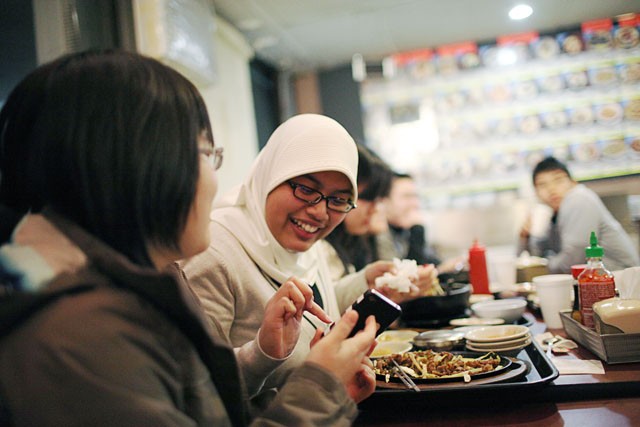 President of the Indonensian Student Association Asa Widiastomo, right, chats with her friend Sistha Darmawan on Saturday at the Korea restaurant.

âÄúCarnivorous. Mollycoddle. Anthropoid.âÄù While most of her peers were waking up to the familiar faces of family and friends over winter break, Chinese international student Jia Guo shook herself awake in the off-campus apartment she had all to herself and recited her words. âÄúApocalyptic. Momentum …âÄù She went through these, the first few words in her long list of definitions, word by word every day of her winter break without fail. âÄúI spent every afternoon reciting words for the GRE test I will take in August until I knew them by heart,âÄù Guo, a journalism junior at the University of Minnesota said. âÄúTo be honest, I spent most of the break in my apartment.âÄù She was one of a number of international students who were unable to travel home over the winter break and remained on campus during the holidays. For Guo, the choice to stay over the break was influenced by a number of factors including her parentsâÄô much anticipated trip to the Twin Cities in the near future. However, for many international students, such as communications senior Asa Widiastomo, reasons for staying were entirely financial. After Widiastomo, an international student from Indonesia, was informed in 2009 that her private scholarship had been discontinued due to the slumping economy, her family was forced to make sacrifices in order to help fund her education. One of those sacrifices was no longer spending winter break together at home. âÄúThis break has taught me that I definitely never want to live alone,âÄù Widiastomo said. âÄúWhat hit me the most was not having anybody to share [with] when I got home at the end of the day.âÄù Despite the occasional moments of loneliness that most, including Guo and Widiastomo, insist go hand-in-hand with any international studentâÄôs experience abroad, those unable to spend the holidays at home found varied solutions to the âÄúwinter break blues.âÄù âÄúIt actually wasnâÄôt as boring as I thought it would be to stay here,âÄù Widiastomo said. âÄúI made a checklist of things I wanted to do while I was here when I came here, and since this is my last winter break before I graduate, it was the perfect time to get some of those things checked off.âÄù First on the list: A full day at Nickelodeon Universe with a group of fellow Indonesian students. âÄúWe bought the unlimited passes with the understanding that we were going to ride every single ride,âÄù Asa said, âÄúand we did âÄî even the ones that seemed to be for young children.âÄù She and her friends went ice skating, snowboarding and skiing and dined together on a regular basis. Guo was also able do some things she had yet to experience in the United States, such as a trip to Como Park Zoo and mastering a classic American board game. âÄúOne of my friends, another Chinese international student who studies in Illinois, came to visit me so we could spend Christmas together,âÄù she said. âÄúHe brought Monopoly with him, and we ended up playing with a group of people three nights in a row.âÄù Though campus resembled a ghost town during the winter closure, many said there were options available for international student support over the holidays. One such option came through the Minnesota International Center, which sent a group of about 26 University students on a three-day trip to Fairmont, Minn., to participate in an annual cultural exchange program. The International Classroom Connections Program turned out to be the highlight of winter break for many international students and Minnesota youth alike. âÄúMy favorite moment this break was traveling to Fairmont with the ICC and sharing a bit of my country with kids there,âÄù Ana Cristina Herrera, an engineering student from Panama, said. âÄúI got the opportunity to go into classrooms and talk to kids from first to ninth grade who had questions like: âÄòDo you have lions in Panama?âÄô or âÄòDo you use cell phones in Panama?âÄô I wasnâÄôt expecting those types of questions, but âÄ¦ it was a great opportunity to speak about my country.âÄù The program is in its 13th year of providing year-round opportunities for Minnesota K-12 students to get a taste of cultures from the world by interacting with international students. According to George Jerzy Hornik, the ICC program director, the Fairmont community was so excited about the event that it was one of the few school districts in the state to remain open during a snowstorm so it could welcome the speakers. International students from more than 20 countries took the trip to Fairmont from Jan. 9-11, staying with host families and visiting schools. âÄúFor the international students that stayed for break during a time that is supposed to be spent with family, they were able to create a sense of family around themselves and do something, not only to enrich themselves, but also this community,âÄù he said. Though the break presented an opportunity to get better acquainted with their surroundings, Guo said staying on campus re-enforced an aspect of international student life that goes unnoticed by most of her American peers. âÄúBeing alone is not always a bad thing,âÄù she said, after ringing in the new year alone in her apartment this year. âÄúIn fact, there is a prerequisite for students who choose to study overseas âÄî the mental preparation to be alone.âÄù âÄúThis ability to be alone is very important, but I hope that there will be more opportunities for international students to gather and enjoy the break together in the future so nobody has to spend New YearâÄôs by themselves next year.âÄù