Do you know on-campus bike rules? You should.

From DWIs to red lights, some laws may surprise you. 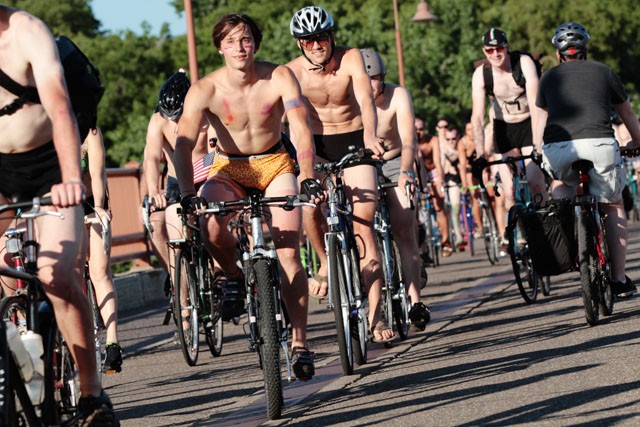 ItâÄôs summertime and bikes are on the road in one of the nationâÄôs most bike-friendly cities.

With that in mind, University of Minnesota officials are making it a point to enforce bike laws around campus âÄî at least some of them.

âÄúWe kind of have to pick our battles on what is going to be important to us,âÄù said University police Lt. Troy Buhta. âÄúAnd thatâÄôs people not obeying traffic laws.âÄù

HereâÄôs a breakdown of what is and is not legal while riding a bike around the University.

Is it legal to ride my bike drunk?

Yes, but itâÄôs not recommended.

Under state law, bicyclists cannot be cited for biking while intoxicated because they are not operating a motor vehicle, even if they are riding in the street.

But bike riders can be cited for unsafe operation of a bicycle, University police Lt. Troy Buhta said. Although itâÄôs not necessarily illegal, itâÄôs not a great idea to hop on a bike after a night at the bars, Buhta added.

Can I bike through a red light?

Yes, with some conditions.

For about 10 years, motorcyclists have been able to drive through red lights if theyâÄôve been waiting for an unreasonable amount of time.

And now bicyclists are able to do the same.

Rep. Phyllis Khan, DFL-Minneapolis, passed an amendment last year that gives bicyclists the right to go through a red light. After a bicyclist comes to a complete stop and waits for an unreasonable amount of time, he or she can bike through the light if no cars are coming.

A rider can still be cited for running a red light, but the new rule provides a legal argument to get out of the fine, said Steve Sanders, bicycle coordinator for the UniversityâÄôs Parking and Transportation Services.

Intersections typically have weights or magnets to detect that a car is there and changes the stoplight. Neither technology can detect a bike easily, Kahn said, leaving the cyclist hanging for long periods of time.

Kahn added that she recently introduced an amendment that would treat stoplights as yield signs for bicyclists, but that proposal received âÄúa lot of flack.âÄù

University police Chief Greg Hestness said the new rule may decrease travel times, but at the expense of safety.

He added that some of the main bike-related problems University police deal with on campus are with bicyclists running through stop signs or red lights.

Can I ride my bike on campus sidewalks?

No, but itâÄôs rarely enforced.

According to campus rules, bikes arenâÄôt allowed on sidewalks that arenâÄôt designated bike paths, but University police admit itâÄôs a rule they donâÄôt have the resources to consistently enforce.

In addition to being banned on campus sidewalks, bikes are also not allowed on some city sidewalks, Sanders said. Restricted areas are typically business-heavy districts with a lot of foot traffic like Dinkytown and Stadium Village.

âÄúEspecially in congested areas, it can be a real problem,âÄù Sanders said. âÄúPedestrians feel intimidated by cyclists who are moving faster than they are.âÄù

Buhta said University police plan to step up bike enforcement in the fall, when light-rail construction will force pedestrians to share more space with bicyclists.

Do I have to wear a light when riding at night?

Yes, and itâÄôs cheaper than you  think.

According to state law, all bikes must be sold with a rear reflector. In addition, a biker has to have a front-facing light when riding at night.

Nicole Waxmonsky, a graduate student at the University who teaches bike classes, said that some people may not attach lights to their bikes because they think it costs too much.

But she pointed out that Boynton Health Service sells bike lights for a reduced price.

For $20, students and faculty can purchase headlights and a helmet at  Boynton.

According to a Minneapolis ordinance, every bicycle has to have a bell that can be heard within 50 feet.
No person can grab on to a moving vehicle while riding a bike, according to state law.
State law limits one person per bike, unless the passenger is a baby. But don’t worry, tandem bike riders: the law applies to bikes built for one.
If carrying an object while riding a bike, one must keep one hand on the handle bars, according to state law.