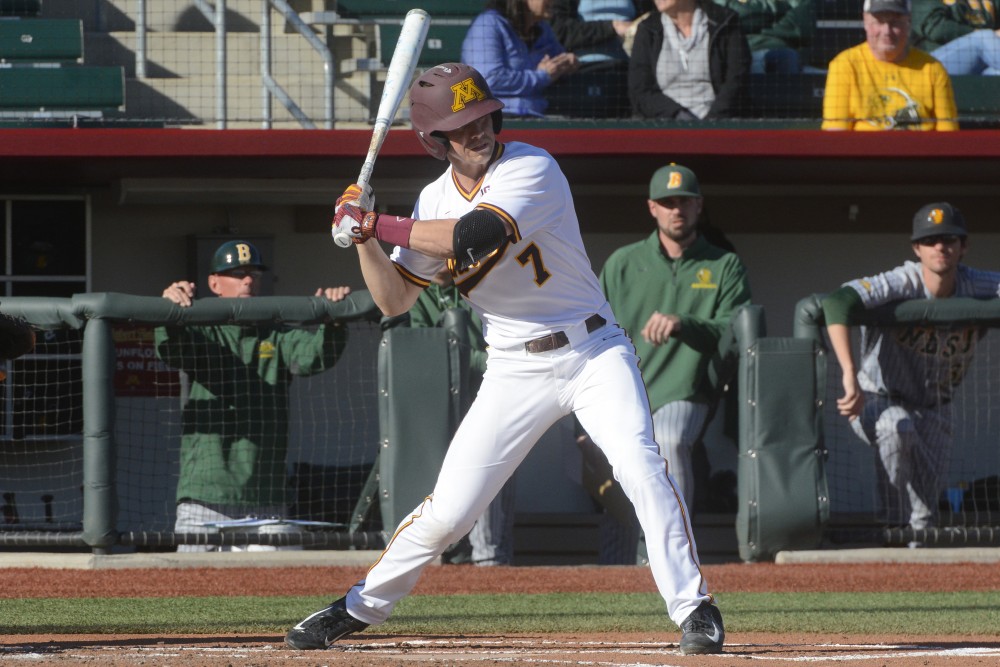 When Gophers infielder Cole McDevitt stepped up to the plate in the sixth inning, it looked like the his team was going to go 1-1 in the mid-week series. The score was 4-1, with the Wisconsin-Milwaukee Panthers leading.

But, McDevitt stepped up to the plate with two outs and the bases loaded, watched one ball go by for the 1-0 count, and then he swung and connected true with the baseball to send it over the purple fence in left-center. The grand slam gave Minnesota a 5-4 lead it wouldn’t give up, securing a sweep of the two games.

“I think a lot of guys had some well hits that just didn’t fall in, but I think overall as a team we stuck with it,” McDevitt said. “It was a big hit at a big time.”

The Gophers (10-4) beat Milwaukee 5-4 on Wednesday after beating Nebraska-Omaha (4-8) on Tuesday 5-3 in a two-game series at U.S. Bank Stadium. In both games, they came from behind.

“I think the team all year long has played nine innings,” head coach John Anderson said. “They’ve been determined that they’re going to play the game out and see what happens, and there’s been no quit in them.”

To make sure the one-run lead was kept over Milwaukee (2-9) on Wednesday, freshman pitcher Max Meyer finished the game out for the Gophers on the mound, and made quick work of the Panthers’ batters, striking out one of the four he faced in the final inning.

Meyer, who has a team-high four saves this year, pitched the ninth inning to close out the Omaha game the night before as well. He was the designated hitter before pitching against Omaha, and he had two hits and two runs — one of those runs was the game winner.

“He’s a special player,” Anderson said. “He’s quite composed for a freshman in college in my opinion. Not too much bothers him, he’s able to move on pretty quickly.”

Minnesota gave up two runs in the top of the first inning to Nebraska, but struck right back with three runs in the bottom of the third inning to give the team the one-run lead. Freshman Joshua Culliver, an Omaha native, started the game, pitching four scoreless innings after a less-than-perfect first inning for the freshman.

The three runs came off of three hits in the third: A Jordan Kozicky single to left field followed by Meyer’s single to right. Then, outfielder Ben Mezzenga hit a sacrifice fly to score Kozicky and after a double by catcher Eli Wilson, Meyer scored on a balk, and Wilson would score on a sacrifice ground ball.

Omaha would tie the game at 3-3 in the top of the eighth, but the Gophers followed up with three hits and two runs in the bottom of the eighth, with Wilson and Meyer scoring, to take a 5-3 lead going into the last frame.

Wilson finished with two doubles and a single on four at bats. He batted in Meyer for the winning fourth run of the Omaha game.

“We were hitting the ball really well as a team tonight,” Wilson said. “A lot of hard hit balls right at guys. So, I would just say I think I just kind of got lucky with the ones that fell.”

Outfielder Alex Boxwell, who hurt his wrist in the North Dakota State game, came in to play in the ninth inning but didn’t see any action. Anderson said he was still recovering and limited in his ability.

Outfielder Riley Smith is still out with an injury he received in warmups to the North Dakota State game, but Anderson said, “I think by this weekend we’ll probably get both of them back.”

Freshman pitcher Ryan Duffy, who got his appendix removed less than a week ago is “a long ways off” still recovering from the surgery.