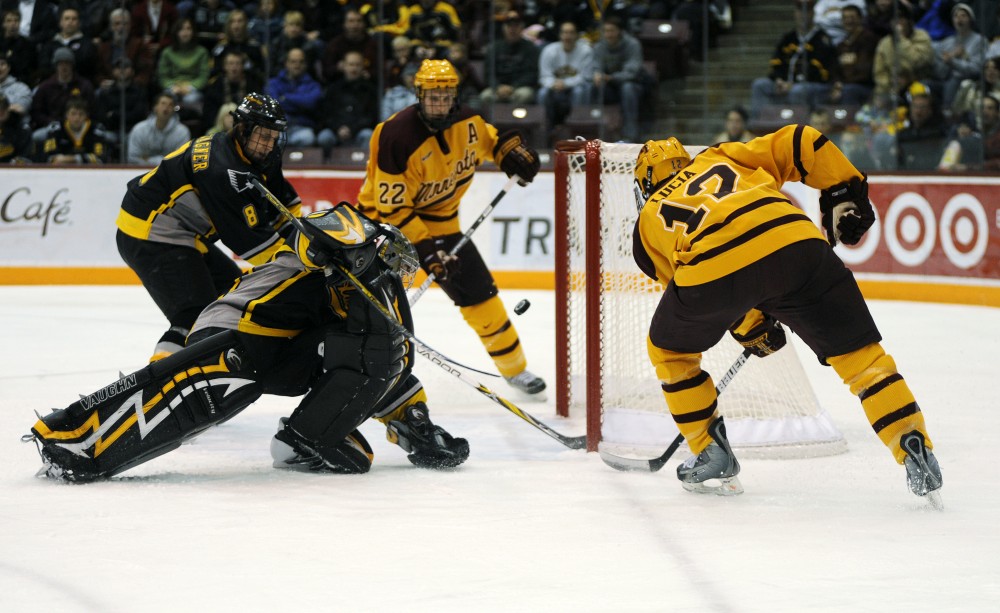 Switching this weekendâÄôs menâÄôs hockey series to Saturday-Sunday didnâÄôt break the GophersâÄô trend of tying first and winning second, but it did get sophomore netminder Alex Kangas his first collegiate shutout in SundayâÄôs 3-0 blanking of Michigan Tech. A day after the Gophers blew a two-goal lead in under 40 seconds to tie the Huskies 2-2 in overtime, Kangas turned away all 38 shots in Sunday afternoonâÄôs penalty-filled contest. âÄúIt feels good to get the monkey off my back,âÄù Kangas said. âÄúWe played a great game today. I had only 38 shots but most of them were from the outside. They didnâÄôt have too many second looks.âÄù âÄúHe was our best player,âÄù Minnesota coach Don Lucia said. Scoring chances were sporadic Sunday due to the 22 penalties called in the game. Twelve of them went against the Huskies âÄî the best behaved team in the Western Collegiate Hockey Association. âÄúTo be honest, we didnâÄôt give ourselves a fighting chance with our level of discipline,âÄù Michigan Tech coach Jamie Russell said. On Sunday, Minnesota (6-0-4 overall, 5-0-3 WCHA) was sparked by a pair of goals in the first from junior forwards Ryan Stoa and Tony Lucia during a 5-on-3 Gophers advantage. Stoa picked up his team high ninth goal at the 9:39 mark to make it 5-on-4, and 24 seconds later Lucia brought the Huskies back to even strength with a goal of his own. The roles were reversed in the final moments of the game when the Huskies tried to play spoiler for Kangas with a 5-on-3 of their own. But the sophomore from Rochester was able to keep the crease clear with a little help from his penalty killing unit. âÄúAlex earned it. Tech had as many scoring chances as we did. He certainly earned the shutout,âÄù Don Lucia said. âÄúThe guys, the last couple minutes, were conscious of it and really wanted to try and get it for him.âÄù Almost fittingly, a last-second desperation shot from Michigan Tech was snagged out of the air by Kangas, who appeared to hold his glove closed a little tighter âÄî making sure not to lose the puck or the shutout. âÄúHe always shows up, night in and night out heâÄôs probably our best player out here,âÄù Stoa said. Game notes Kangas made 41 career starts before SundayâÄôs shutout. The last Gophers shutout was made by Jeff Frazee last year on Nov. 16 in another 3-0 win âÄî that time over Alaska Anchorage. Kangas would later edge out Frazee to become the Gophers everyday goalie. The Gophers continued to find success in special teams situations. The power play was 3-for-12, and the penalty kill blanked Michigan Tech in all of its 12 opportunities. Minnesota has only been shutout once in the last two seasons. Minnesota State handed the Gophers a 1-0 loss in double overtime in Game One of last seasonâÄôs WCHA Playoff Series. With No. 1 Boston University losing Friday night, second-ranked Minnesota is presumed to jump to the top of the polls. The last time the Gophers were the No. 1 team in the country was Jan. 27, 2007.