Over 80 percent of pedestrian crashes occur on 10 percent of streets, including University Avenue and 4th Street Southeast. 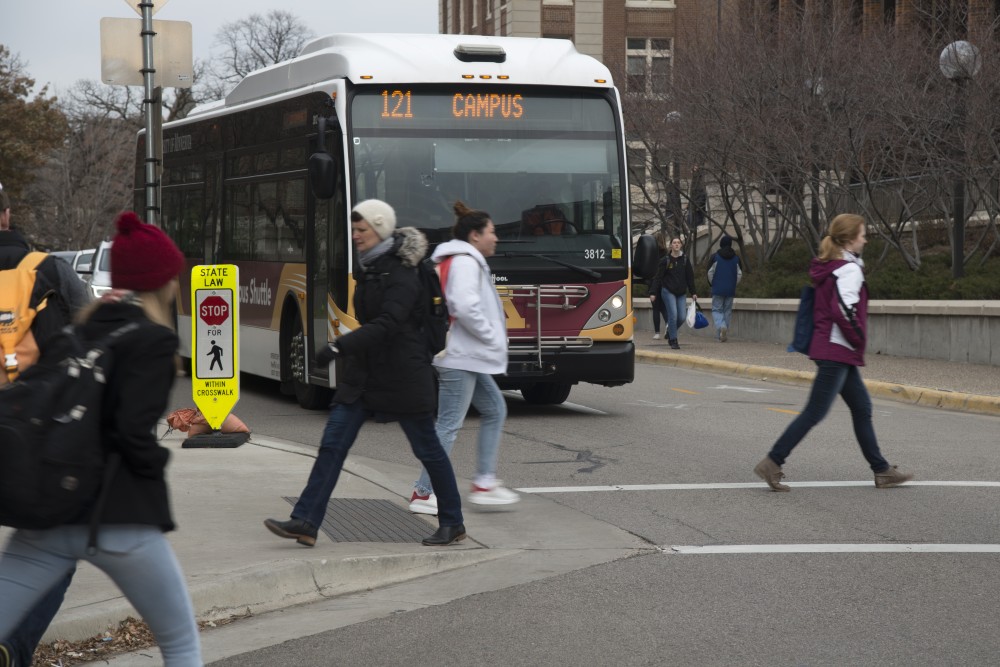 A Campus Connector waits for pedestrians to cross the busy Pleasant Street crosswalk between Walter Library and Appleby Hall on Friday, Dec. 1.

A study presented to the Minneapolis Transportation and Public Works committee Tuesday identified hot-spots and trends for pedestrian crashes in the city.

Data in the study examined where pedestrian crashes in the city occur, as well as the causes of the crashes. The City will use the data toward its Vision Zero goal, which aims to reduce fatalities and serious injuries from crashes on city streets.

“With Vision Zero, the goal… is to eliminate all severe and fatality crashes by the year 2027,” said Steve Mosing, traffic operations engineer for the Minneapolis Department of Public Works. “We wanted to educate ourselves on how and why pedestrian crashes are occurring, so this report will be relied upon to work toward the Vision Zero goals and also mitigating crashes and reducing crashes.”

Seventy four percent of major crashes occurred on less than 5 percent of streets. The study found 4th Street Southeast was among the streets with the most collisions, in what the study defines as the “high injury network.”

“We have isolated accidents involving pedestrians [around campus],” University of Minnesota Police Department Lieutenant Chuck Miner said. “We typically see that with jaywalking issues, both with pedestrians and bikes, and not following the lights.”

“There’s way more of a volume of pedestrians on intersections around campus,” Miner said.

University spokesperson Lacey Nygard said the University of Minnesota urges pedestrians and bicyclists on and around campus to abide to crossing signals, crosswalks and bike lanes.

“Safety is a high priority at the University of Minnesota. With a growing density in neighborhoods surrounding campus, we will continue to work with the City of Minneapolis to examine ways to make the area safer for pedestrians,” Nygard said in an email.

Leading pedestrian intervals give pedestrians a WALK signal before the parallel lights turn green. The study analyzed current LPIs and their effectiveness in reducing pedestrian crashes.

At 4th Street Southeast and 14th Avenue Southeast, pedestrian crashes have not seen any significant decrease since LPIs were introduced.

A majority of pedestrian crashes occur at intersections, with over two-thirds occurring at traffic signals. Mosing said the study will help the city focus attention on the most problematic crash areas.

“A nice reason for this report is that it really did focus into areas. Minneapolis has a lot of roadways and a lot of intersections,” he said. “There’s over 7,500 intersections in this city, and to provide a focus for us to prioritize our potential enhancements in the future really helps us.”